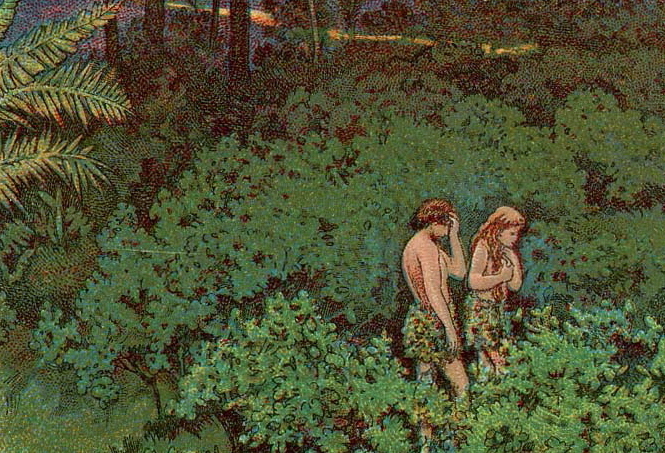 “And the eyes of them both were opened, and they knew that they were naked; and the sewed fig-leaves together, and made themselves girdles” (Genesis 3:7).

So goes the infamous account of Adam and Eve, following their rebellion against God in taking of the tree of the knowledge of good and evil. An overlooked, more minor detail is that this is also the first mention of a type of fruit in the Bible.

So turning to archaeology (or rather, archaeobotany): Can you guess what the earliest-discovered cultivated fruit is? That’s right: the fig!

In 2006, archaeobotanists working just north of what is often called the “world’s oldest city,” Jericho, discovered the remains of figs that showed evidence of deliberate cultivation—thus labeled the “earliest known cultivated fruit crop,” and “perhaps the first evidence anywhere of domesticated food production at the dawn of agriculture” (as reported by the New York Times). The scientists, from Israel’s Bar-Ilan University, dated the charred fig remains at the site, called “Gilgal I,” to a full millennium before the next-earliest crops—barley, wheat and chickpeas (arriving at a date for the figs of 11,400 years b.p.). They posited that the figs were being stored for drying purposes in the ancient settlement building. (For more about dating methods, see here.)

The figs were identified as a mutant parthenocarpic (seedless) variety. “Because these were reproductive dead-end trees, the botanists reasoned, they could have been propagated only by people planting shoots of the variant strain again and again. A piece of stem stuck in the ground will sprout roots and grow into a tree, which could explain why figs were domesticated much earlier than grape, olive and other fruit plants” (New York Times, 2006). The cultivation technique the archaeobotanists discovered appeared to be “well advanced.”

It is uncanny that the earliest fruit described in the Bible is also the earliest cultivated fruit discovered by archaeologists. Even the use of the tree, for “clothing,” could be construed as the first “produced” textile. As such, the fig aptly earns its colloquial title as the “oldest fruit known to man.”

Of Eden, Forbidden Fruit and Modesty

There has long been a debate as to where the biblical Garden of Eden was situated. The two predominant theories center on either Jerusalem or the Holy Land, or somewhere in the east around Turkey or Iran (ironic, given these two locations are very much at complete odds in just about every respect—politically, religiously, historically). Adam and Eve were banished “east” of the Garden of Eden (Genesis 3:23-24)—thus, per the Jerusalem theory, they were sent in the direction of Jericho. It was at the time of this banishment that God told Adam, “‘[C]ursed is the ground for thy sake; in toil shalt thou eat of it all the days of thy life.’ … Therefore the Lord God sent him forth from the garden of Eden, to till the ground from whence he was taken” (verses 17, 23). One of the “fig” researchers, Dr. Ofer Bar-Yosef, believes likewise that the first cultivated grains appeared in Israel. (For more on the subject of ancient Eden’s location, read our editor in chief’s article “The Incredible Origins of Ancient Jerusalem.”)

Looking at this Genesis 3 passage from another angle: It’s this biblical mention of fig leaves that has led to a theory that the forbidden fruit itself may have been a fig—that the leaves were from one and the same tree. In this vein, figs are also mentioned in the Bible in connection to “fallen stars” (stars are symbolic biblical language for angels; Isaiah 34:4, also a parallel New Testament verse, Revelation 6:13). The pomegranate is another fruit often associated with the two trees of the Garden of Eden. This fruit may be a fit with the tree of life; the tabernacle and temple were heavily decorated with carvings of pomegranates (i.e. Exodus 39; 1 Kings 7).

Whatever the case, it is generally agreed that the forbidden fruit could not have been an apple, as is traditionally pictured in Middle Ages European artwork. This popular misassociation likely happened because the Latin word for “apple” originally meant “fruit” in general. And a fig as the forbidden fruit would certainly be a symbolic picture, not least given its intriguing royal purple outer appearance and “bloody,” “sinewy” mash of inner flesh—perhaps an immediate sign for Adam and Eve of the consequences of their decision.

As for Adam and Eve’s “fig-clothing”: The Hebrew word used for “girdles” in Genesis 3:7 is hagora, literally a “belt.” As such, the broad fig leaves would have been akin to the typical tribal loincloths.

Evidently, though, God’s standards of modesty differed. Later in the chapter, we read the following: “Unto Adam also and to his wife did the Lord God make coats of skins, and clothed them” (verse 21; King James Version). The word “coats” can also be (perhaps better) translated as “tunics”—a more general upper and lower covering. This fits alongside later biblical accounts of modesty (Genesis 9:23; Leviticus 18; 2 Samuel 10:4; etc).

Some have wondered why God clothed Adam and Eve—if He created “shame” or if the original state of Adam and Eve was a nod to nudism. The Bible is actually quite categorical about the development of both clothing and shame. Genesis 2:25 reads: “And they were both naked, the man and his wife, and were not ashamed.” “And God saw every thing that He had made, and, behold, it was very good” (Genesis 1:31). The shame came only as a result of sinning—taking of the wrong tree (Genesis 3:6-11).

God’s clothing of Adam and Eve came later on—and it’s tied directly to another statement immediately prior. “And the man called his wife’s name Eve; because she was the mother of all living. And the Lord God made for Adam and for his wife garments of skins, and clothed them” (verses 20-21). It is in the context of other human beings on the scene that clothing is brought up. Other passages make this clear—that exposure should be limited to the marriage relationship—in this case, Adam and Eve (again, Leviticus 18). As such, Genesis 3:20-21 can best be considered a parenthetical thought (verse 20, in the wider context, makes this clear).

It is typical to dismiss the Garden of Eden account as simple myth. But—if I can put it this way—this little archaeobotanical “fig leaf” of a discovery goes together with what is now a surprisingly large and detailed body of evidence for the Garden of Eden account: legged snakes; early inscriptions describing a “Lady Rib”; the selection of a body part with which to make the woman—one that, thanks to modern science, we now know is the best body part for doing so; even genetic evidence tracing all mankind back to one man and one woman, who lived in “recent” history. For more information, check out our article “The Case for Adam and Eve.”

But over and above the physical particulars of the Garden of Eden is the core message of the two trees, and how the events of Genesis 3 have shaped human civilization as we know it. To read more about this subject, take a look at the following article Mystery of the Two Trees, and request a free copy of Herbert W. Armstrong’s book Mystery of the Ages.