If Only America Had a Tisha B’Av

The important, yearly reflection on past mistakes and national division, in order to prevent future catastrophe
By Brent Nagtegaal • July 30, 2020 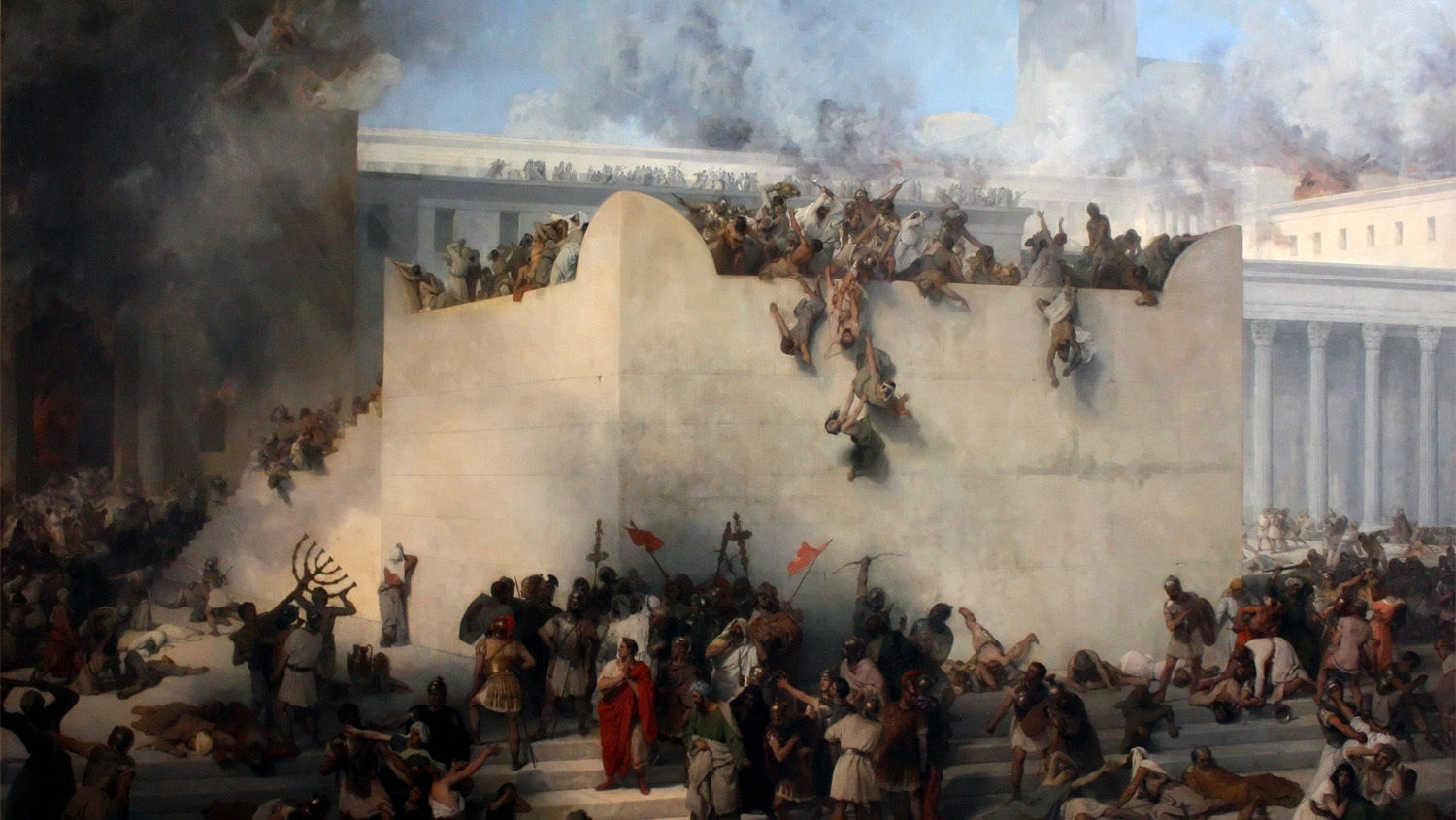 The climactic scene of the holiest place in ancient Israel going up in flames has been seared into Jewish memory for 2,000 years. And each year on this day, the lessons of why God allowed it to happen, why He would forsake His own earthly house, is discussed and rehearsed among Jews the world over.

For the past week leading up to Tisha B’Av, it has been refreshing to see many Israeli commentators citing this historic example and warning of the dangerous path the nation is now on as protests against Prime Minister Benjamin Netanyahu turned vengeful and violent.

From what I’ve read, I wish that America had its own Tisha B’Av. Perhaps then there would be a more prescient understanding of where America’s divisions are leading.

Jewish News Syndicate editor in chief Jonathan Tobin wrote about this in his column on Monday stating that “tradition teaches us that the fall of the second temple in 70 c.e. occurred because of sinat hinam—senseless or baseless hatred—that undermined the Jewish resistance during the siege of Jerusalem ….”

Witnessing such senseless brother-on-brother violence in Jerusalem was Joseph Ben Matthias, former commander of rebel Jewish forces of the Galilean region. Matthias, whom we know today as the historian Flavius Josephus, wrote an account of the grisly carnage going on in the city.

Josephus tells of three factions within the city that fought against each other while the Romans were besieging it. One of the parties, the Sicarii zealots, even burned remaining stocks of food within the city so that there was no choice but to join their ranks. The fact is that thousands of Jews died at the hands of each other before the Romans breached the city walls. As Josephus would later record, “[S]edition destroyed the city, and the Romans destroyed the sedition.”

As Tobin and others have recently described, the Jewish state is now experiencing internal division unparalleled since the beginning of statehood. “The behavior of the two biggest political camps in Israel resembles the events of the end of the Second Temple era,” wrote veteran Israeli journalist Nadav Shragai on July 29. He continued:

The language in the street and the public experience have become riven, accusatory and embroiled in disputes. In battle, many of us have made hatred of others, or disagreements, such an inherent part of things that they become part of our core identities. … There is now almost no way of holding a discussion without slander, arguing without ridicule, or talking without “annihilating” the person in front of us. What is said quietly is no longer heard, and what doesn’t come with a little mudslinging falls on deaf ears. … More than anything , we are forgetting that the whole—the Jewish people—is bigger than the sum of its parts or its arguments, and that more unites us than divides us. Tisha B’Av is a time to remember that.

Shagrai doesn’t necessarily present a solution to the division, but he is clearly sounding the alarm that Israel is on the path to destruction unless there is a big change in direction.

And the historic memory of Tisha B’Av is strong enough among Israelis that people will be able to agree with him or at least understand his point.

The fact that many Israeli leaders and commentators can use past events to warn about the present speaks to the preservation of historical events in the collective memory of the Jewish people. The repeated holy days and yearly memorials, such as Tisha B’Av, keep the events in the public consciousness.

That does not mean that Israelis will learn the lessons of history any more than Americans, but it does mean that history can still provide a flare of warning about what’s coming.

In America (as well as the other English-speaking nations, for that matter), the study of essential history has been relegated out of major fields of study in the state-run educational systems. National holidays that could have played a role in preserving the national memory are now devoid of any historical meaning whatsoever.

Thanksgiving is a prime example of an American national holiday that would provide not only a warning of the divisions inside America today but also the solutions.

During the United States Civil War, just a week and a half after the Battle of Gettysburg, President Abraham Lincoln gave his proclamation of Thanksgiving as a national holiday. He wrote:

It has pleased Almighty God to hearken to the supplications and prayers of an afflicted people and to vouchsafe to the Army and the Navy of the United States victories on land and on the sea, so signal and so effective, and to furnish reasonable grounds for augmented confidence that the union of these states will be maintained, their Constitution preserved, and their peace and prosperity permanently restored. It is meet and right to recognize and confess the presence of the Almighty Father and the power of His hand equally in these triumphs and in these sorrows. Now therefore be it known that I do set apart Thursday, the 6th, to be observed as a day for national thanksgiving, praise and prayer.

This is a day that is still kept every year in the United States. But how many enshrine within those celebrations the memory of Lincoln’s proclamation in the midst of the Civil War. How valuable would it be for Americans today to have Lincoln’s Thanksgiving Proclamation in mind every fourth Thursday in November?

Certainly, there are still a few historians in the United States that look at the present chaos in the streets, as well as the bitter divide within the political arena, and warn of the natural outcome. Victor Davis Hanson is one such historian-turned-political commentator who sounded his own warning on Wednesday in the Washington Times. His piece, titled “American’s Summer of Cultural Suicide,” concluded this way:

If the United States is not to become an extinct Easter Island, it must rediscover a respect for its past, honor for the dead who gave us so much, the desire to invest rather than spend and a need for some sense of transcendence.

If we do not believe that what we do today has consequences for our children after we are gone, there are ancient existential forces in the world that will intervene.

And it won’t be nice.

That sounds like the warning of national calamity from a historian. But how many people are listening? Even Hanson lamented earlier in his piece that many in the U.S. “are ignorant of history and cannot be persuaded that they are destroying themselves.”

Unmoored from history, America is like a rudderless boat floating downstream at increasing speeds. Bitter rivalries among those on board have everyone focused on what’s happening on the boat rather than realizing what’s just ahead. And if someone like a historian does stand up and warn of the coming destructive waterfall, the people are too ignorant to find value in his prophecies.

You can’t afford to have the same careless approach to history.

If you feel distressed by current events, wondering where they might lead, then you really need to start looking to history for the answers.

Of course, not all history is of equal value.

Primarily, the lessons garnered from biblical history are most important. Often, knowledge of secular history might help you see where events are leading. Only rarely does secular history provide the solutions.

If Americans had a Tisha B’Av then there would be an awareness of where the violence on the streets is leading. However, even Tisha B’av could not provide a solution to America’s problems today, just as the Jews are failing to find a way out of their civil distress.

However, such solutions are always found in a study of biblical history.

If you haven’t already, I recommend reading Gerald Flurry’s book The FormerProphets to receive essential historical lessons from the Bible that will provide you with solutions and comfort. You can request the full book for free here, or start right now by reading the first chapter online. It’s titled “The History That Is Prophecy.”