Chances are you’ve heard of the famous one from Tel Dan—here are two more.
By Christopher Eames • January 28 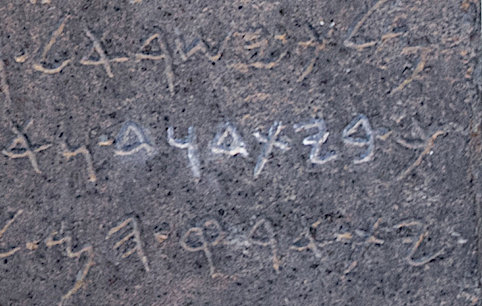 In 1993, the discovery of an inscription in northern Israel rocked the archaeological world. Contained within the ninth century b.c.e. script was the following word: ביתדוד, bytdwd, translated as “House of David.”

This inscription was revolutionary. To that point, no archaeological evidence was confirmed as mentioning the name of Israel’s most famous king, David. As such, numerous minimalist scholarly works relegated him to mere myth. Finally, here was an inscription that not only named the king, but identified him as the head of a royal dynasty.

Of course, advocates of the David-myth theory would not let this one through easily. Initially only the larger of the now-three pieces was discovered—thus, lacking more general context, there was some dismissal that the word could refer to something else. The discovery of a second fragment added more context, as below:

With this side-by-side listing of the kings of Israel and Judah, it became clear that bytdwd as “House of David,” a Judahite title used 26 times in the Hebrew Bible, was indeed the correct interpretation.

The wider inscription, describing the deaths of kings Jehoram of Israel and Ahaziah of Judah during battle against Hazael, fits alongside the account in 2 Kings 9. Really, though, the details of the inscription are overshadowed by the single line, “House of David.”

Chances are, if you’ve followed biblical archaeology to any degree, you’ll have heard of this Tel Dan Stele. But did you know that there are two others?

The Tel Dan inscription was a broken chunk of a Syrian victory stele. The Mesha Stele is a Moabite victory stele, belonging to King Mesha and fitting alongside the biblical account in 2 Kings 3. As such, this would be a slightly earlier reference to King David—c. 850 b.c.e.

This fantastic, largely complete inscription, which had been found in Jordan by local Bedouin, became known to French archaeologist Charles Clermont-Ganneau in 1868. In 1869, Arab intermediaries were sent to the camp in order to make a “squeeze,” a papier-mâché, schematic copy of the impression. Some time after this, the stele was smashed in pieces by the tribes people and distributed among themselves—probably in order to make money off the separate pieces. Large chunks have since been acquired and fitted together—and thanks to Clermont-Ganneau’s “squeeze” while it was still in one piece, the majority of the stele was able to be reconstructed. It currently sits in the Louvre museum, in Paris.

Still, about 30 percent of the text remains obscure, with the lowest lines difficult to read. In 1992, French scholar André Lemaire proposed the following translation: “[to herd] the small cattle of the land, and Horonen, in it dwelt the house of [D]avid ….”

This was a year before the Tel Dan discovery. But the phrase turned out to be in similar form—in this case, missing the initial “d.”

The identification would be a good fit. After all, the upper section of the stele references the territory of northern Moab; the southern portion, including Horonen (the biblical Horonaim) could easily relate to control by Judah, the “House of David.” There even appears to be some connection between Horonen and David’s reign, as related in 2 Samuel 13:34 (note the Septuagint version). And to Lemaire, any other reading proved an awkward fit. Still, alternate theories have been put forward, including putting an additional letter at the end of “David,” dwdh, thus turning the name into “Daodoh.” (In Hebrew, the letter “w” can represent either the sound of “o” or “v.”)

In 2019 Prof. Israel Finkelstein, together with Nadav Na’aman and Thomas Römer, completed a paper utilizing new photo analysis of the Mesha Stele squeeze, claiming that the preserved text could not be confirmed as reading “House of David” after all, but that only the “b” was clear as the ruler of Horonaim. Further, they stated that space allowed for only three letters, thanks to what they identified as a dividing line in the text—thus proposing the Moabite name “Balak,” as a centuries-old memory of the Exodus figure. (Finkelstein is famous in the archaeological community for his theories dismissing David’s reign.)

Immediately following their release, a response was given by Associate Prof. Michael Langlois, whose own research was about to be published. Langlois has spent years poring over the Mesha Stele, utilizing his own new 3d digital imaging of the artifact. With this technology, Langlois was able to identify a previously unnoticed punctuation mark in the stele, fitting squarely with Lemaire’s original translation. He also pointed out that there was no evidence for a dividing line in the text—thus dismissing the above theory, and stating that “the space [for “House of David”] is exactly perfect—no more, and no less.” (You can read more details about the back-and-forth in Amanda Borschel-Dan’s Times of Israel article here.)

With this most recent research, Langlois thus confirmed with about as much certainty as is possible that the original proposal, “House of David,” was indeed the correct reading.

The above inscriptions apply to the middle-ninth century b.c.e., dating just over a century after David’s death. This inscription would be the earliest inscription of the lot, dating to the end of the 10th century b.c.e.—the same century in which David ruled, according to biblical chronology (although he died during the first half of that century).

This Egyptian inscription was highlighted some two decades ago by the famous Egyptologist Kenneth Kitchen. Part of Pharaoh Sheshonq i’s famous Karnak temple records a lengthy list of places he conquered within Israel and Judah (fitting alongside the accounts in 1 Kings 14 and 2 Chronicles 12). Many of the names are eroded or destroyed. One, however, apparently relating to a group of areas in the Negev/southern region of Judah, is transliterated as: h[y]dbt dwt—translated by Kitchen as “Heights of David.”

The first Egyptian word indicates heights, or highlands, fitting with this area of Judah. The second word is slightly more problematic—the first two letters matching the Hebrew dwd for David—but the “t” is different.

Here again, Kitchen could see no other known option that could fit: “It could not really be Dothan [probably the closest-spelled alternate]—no final ‘n,’ and in entirely the wrong context for a north Palestinian settlement” (On the Reliability of the Old Testament, Page 93). Even at face value, though, the “t” sound in Egyptian hieroglyphs is no great problem—“d” and “t” are similar dental consonants that readily change across cultures. (For example, our English “day” is directly related to the German tag.)

And as Kitchen points out, the name Davit for David in Egyptian could be expected:

[I]n an Ethiopic victory inscription of the early sixth century a.d. in southwest Arabia, the emperor of Axum cited explicitly passages from the “Psalms of Dawit,” exactly the consonants Dwt as found with Shoshenq (ibid).

This shows a use of a name-type that would fit the region: Ethiopia was long intertwined with ancient Egypt and ruled over it for a time. Kitchen continues to cite other examples of the interchangeable Egypt “t” during the period—for example, Megiddo and Damascus are spelled by the Egyptians with a t. As Kitchen concludes:

This would give us a place-name that commemorated David in the Negev barely 50 years after his death, within living memory of the man. The Negev was an area where David had been prominent in Saul’s time (1 Sam. 24:1; 27; 30). His name being in such a place-name is analogous with the “field of Abram,” also in Shoshenq’s list (ibid).

With the Karnak inscription and Mesha Stele, we have a total of three “David” inscriptions—part of a now almost rapidly-growing body of evidence for the king. The question is no longer if David existed, but just how powerful he was. Was it as the Bible says? It’s a question often posed by archaeologists, and regularly written about by journalists.

From the excavations of “David’s Palace” in Jerusalem, to the “Davidic” cities of Khirbet Qeiyafa, Khirbet a-Ra’i, Tel ‘Eton and more, to foreign sites the Bible records that he dominated during his reign (such as Tel et-Tell and Timna)—the burgeoning archaeological evidence closely parallels the biblical account of David in scope and territory. From his relationship to the Philistines, to evidence of import of copper to Jerusalem from Edom, to his ties to the northern Geshurite kingdom, to the collapse and “Dark Ages” of virtually every other surrounding nation at the time—the list goes on.

King David has remained, to this day, one of the most revered, respected, immortalized individuals in history. Such legendary figures are not built on thin air. And as archaeology is demonstrating, this one certainly wasn’t.