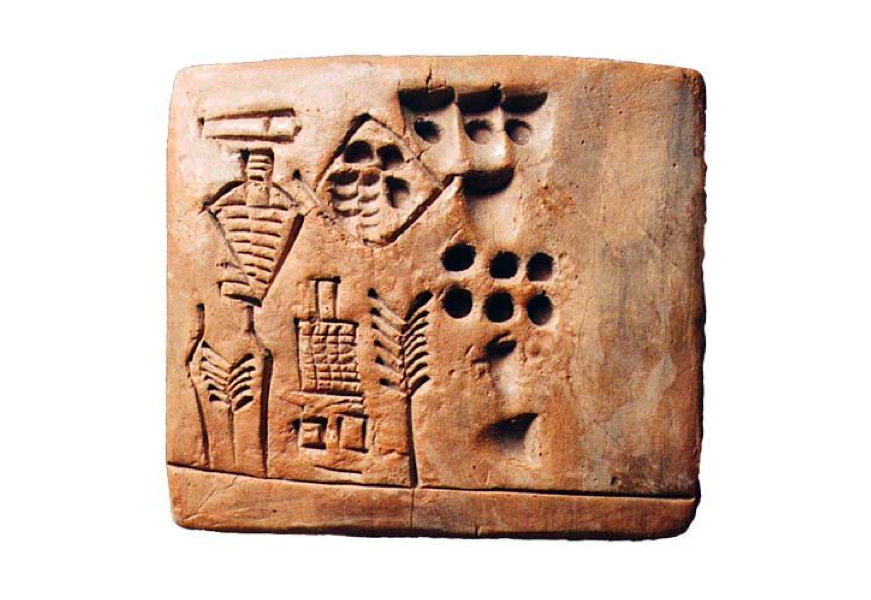 The c. 3000 B.C.E. signature, from Uruk.
The Schøyen Collection, Oslo and London

Going, going, gone—for $235,000 (nearly ₪800,000)! That was the price paid at London-based Bloomsbury Auctions this summer for a small, roughly 7-centimeter-square block of clay, sold by the famous Norwegian antiquities collector Martin Schøyen—after a fierce bidding war nearly doubled the price he had hoped to receive.

Of course, this was more than just a square of clay. Dubbed the “world’s first signature,” this piece is dated to around 3000 b.c.e., and was discovered in the ancient Sumerian city of Uruk (southern Iraq). The item contains the “autograph” of an individual, said to be the “first recorded personal name of any human in history,” as well as a reference to beer-making (beer was first discovered in the Sumerian kingdom). The tablet is translated as follows:

The top left symbols (circled) constitute the name Kushim. The imprints to the right reference the quantity of barley and months. And the images at the bottom depict the process of beer-making: from a stalk of barley, to a (brewery?) building, to the finished product—the barley in a beer container. Sure, not the most comprehensive “recipe,” but you get the picture!

The individual “Kushim” is known from 17 other tablets, some of which refer to him as a “temple administrator,” but this inscription is believed to be the earliest example of a personal signature. And the name is similar to that of an early biblical figure, likewise associated with this kingdom of Sumer and city of Uruk.

The name “Cush” is a very early biblical name, first used in Genesis 2:13 to denote a territorial region. And it is the name of the infamous Nimrod’s father (Genesis 10:6-9). In Hebrew, descendants of “Cush/Kush” are called “Cushim.” Of course, we cannot know whether or not the above-signed Kushim is one and the same as the biblical Cush. Still, the artifact helps corroborate the biblical use of this type of name in a related, early Mesopotamian context.

This biblical Cush, son of Ham, son of Noah, was of the first generation born after the Flood. Following the Flood, civilization is described as beginning in the “plain in the land of Shinar” (Genesis 11:2). Shinar is synonymous with Sumer/Shumer, history’s “earliest-known civilization,” which was centered in the southern plains of Mesopotamia.

According to the Bible, Cush’s son Nimrod became founder and leader of this kingdom. The Bible describes a number of cities established by Nimrod in this territory (Genesis 10:10):

And the beginning of his kingdom was Babel, and Erech, and Accad, and Calneh, in the land of Shinar.

The italicized places above have been discovered by archaeologists, and are known by their parallel ancient names Babylon, Uruk and Akkad, respectively. (The identification of Calneh is still uncertain. The Hebrew word may simply translate to the phrase “all of them”—as in, “Accad, and all of them in the land of Shinar.”) The biblical city of Erech is this Sumerian city of Uruk, in which Kushim’s tablet was found.

The biblical Hebrew word “Cush” means black. Interestingly, the ancient Sumerians referred to themselves as the “Black-Headed Ones”—perhaps in reference to their patriarch? Later on in the biblical account, the Ethiopian nation is established—and the ancient historical name for the Ethiopian people is Cushim, signified as descendants of Cush.

As for beer? Beer is mentioned repeatedly in the Bible—the earliest mention (arguably) is in Numbers 6:3—long after the Sumerian period. But there is a biblical account of an incident involving alcohol—in this case, wine—linked to Cush’s brother, Canaan (Genesis 9:20-24).

While the “Kushim” tablet was uncovered several decades ago, its recent sale as the “world’s first signature” has returned to the headlines this fascinating discovery. A certain Kushim, connected to the city of Uruk in the land of Sumer. A close match in name (if not in person) to the biblical Cush, connected to the city of Erech in the land of Shinar—attesting to an accurate setting of even the earliest chapters of the Bible.

Read our article “Biblical Names Confirmed Through Archaeology” to see how even generic names—names that don’t necessarily “prove” a specific biblical character—point to the accuracy of the biblical account.