One of the largest-ever gold hoards discovered in Israel—by a pair of teenagers
By Christopher Eames • August 23, 2020 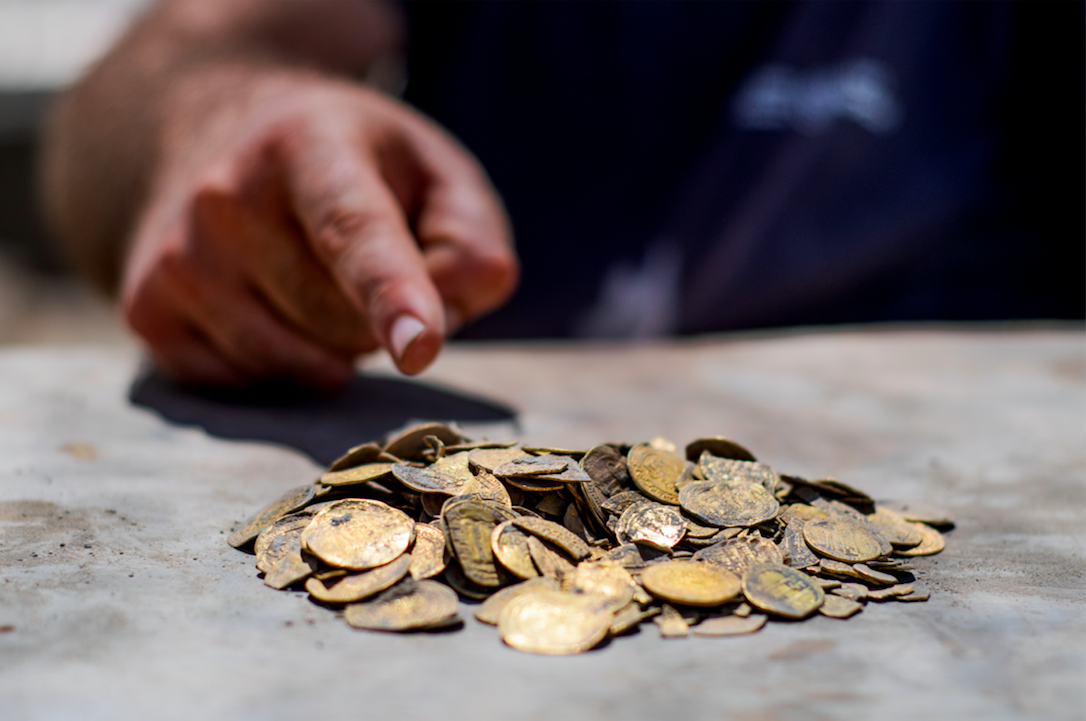 Photo of the cache as found on the site.
Yoli Schwartz, Israel Antiquities Authority

Two youths participating in an Israel Antiquities Authority (iaa) excavation—part of their pre-army service—were startled to discover a massive hoard of gold coins while excavating a site in central Israel, according to a press release issued today.

A total of 425 coins of pure gold were discovered at the site, dating to around 1,100 years ago—a period in which the land of Israel was a part of the Abbasid Caliphate, ruled from Baghdad. The coins had been placed in a pottery vessel, that had evidently been buried deliberately and secured with a nail. Because of the pure gold content of the coins (24 karat), they are not subject to oxidization—and thus looked “as if buried the day before,” the excavation directors noted. “Their finding may indicate that international trade took place between the area’s residents and remote areas.”

Most of the coins date to the end of the 9th century c.e. The hoard included full gold dinars, but also 270 small “cuttings” of gold coins, that started to be used during this period as small change—a time when the typical bronze and copper coins disappeared. One of the cut coins has never been discovered before in Israel—a Byzantine coin minted in Constantinople, displaying the emperor Theophilos (829-842 c.e.). This unusual Byzantine coin, found in an Islamic hoard, demonstrates the connections of war and trade between the two empires. According to Dr. Robert Kool, coin expert for the iaa, “this rare treasure will certainly be a major contribution to research, as finds from the Abbasid period in Israel are relatively few. Hopefully the study of the hoard will tell us more about a period of which we still know very little.”

The excavation was conducted at an unspecified site in central Israel, as part of pre-construction preparations in the area for the building of a new neighborhood. It is typical for Israeli archaeologists to first excavate an area before large-scale constructions are undertaken, in order to determine whether or not significant items of antiquity are buried beneath.

As part of their pre-army service, youths join archaeological excavations in the summer months. This is to help bring them “closer to their past,” and to help them understand what they are fighting for. Oz Cohen, one of the teenagers that discovered the hoard, stated:

It was amazing. I dug in the ground and when I excavated the soil, saw what looked like very thin leaves. When I looked again I saw these were gold coins. It was really exciting to find such a special and ancient treasure.

In 2013, a similar discovery was made during the Jerusalem excavations of Dr. Eilat Mazar (assisted by Watch Jerusalem staff)—the excavation of a hoard of 36 gold coins, a large gold menorah medallion, and other gold and silver items, dating to roughly 1,400 years ago, during the Byzantine period.

The largest gold hoard unearthed in Israel was discovered in 2015—nearly 2,000 gold coins were found by divers off the coast of Caesarea, dating to nearly 1,000 years ago.