A discovery of several dozen beautifully carved architectural elements from the time of the Judean kings
By Christopher Eames • September 2, 2020 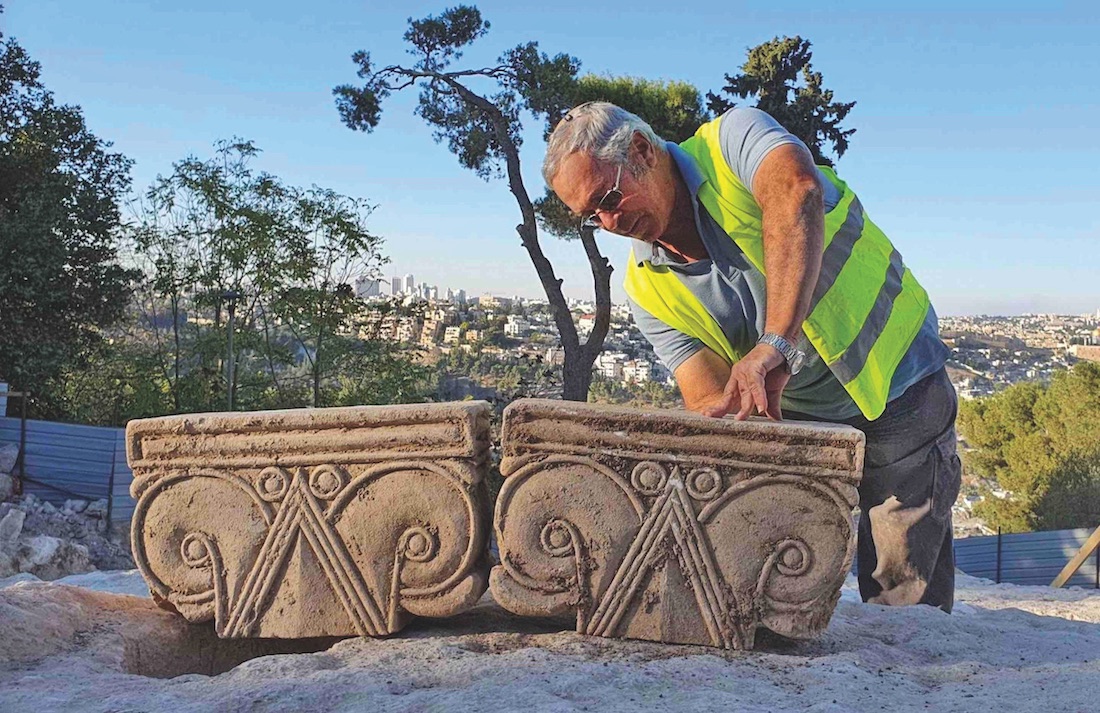 The director of the Armon HaNatziv excavation, Yaakov Billig, with two of the large capitals discovered at the site.
Yoli Shwartz, Israel Antiquities Authority

Archaeologists working at Armon HaNatziv (southeastern Jerusalem) have released an exciting new First Temple period discovery to the public—a trove of ornately carved architectural elements from a royal building dating to the seventh century b.c.e. The trove includes several dozen stone pieces, including the best-preserved proto-Aeolic capitals and “items from lavish window frames,” including balustrades of ornate columns, pointing to the palatial nature of the site.

Armon HaNatziv is a promenade area overlooking the City of David from the south. The location (whose modern name means “Commissioner’s Palace”) was built up by the British Mandatory administration a century ago. And it seems they had the same idea as the early royal Judahite administration, who built a palatial promenade structure here some 2,600 years earlier.

The excavation team, directed by Israel Antiquities Authority archaeologist Yaakov Billig, dates the construction of the structure to the seventh century b.c.e.—some time following the Assyrian siege during the days of King Hezekiah. Together with the recent discovery of a nearby, seventh-century Hezekiah-era administration storehouse in the neighborhood of Arnona, and another parallel palatial structure at nearby Ramat Rachel, the excavators attribute the construction of this royal promenade building as part of a wider “exit from the walls.” As the threat of foreign siege ended, a renewed building program began in the seventh century, with royal administration buildings, storehouses, and grand palatial buildings suddenly emerging outside of Jerusalem’s walls.

The Bible describes just such a national “rejuvenation,” following this Assyrian siege of Jerusalem:

And Hezekiah had exceeding much riches and honour; and he provided him treasuries for silver, and for gold, and for precious stones, and for spices, and for shields, and for all manner of goodly vessels; store-houses also for the increase of corn, and wine, and oil; and stalls for all manner of beasts, and flocks in folds. Moreover he provided him cities, and possessions of flocks and herds in abundance; for God had given him very much substance. (2 Chronicles 32:27-29)

The most notable discoveries made at the Armon HaNatziv site are the proto-Aeolic capitals. The term “proto-Aeolic” refers to a particular style of capital—the stylized uppermost part of a column. It is highly decorative and makes the pillar more stable. Proto-Aeolic capitals are famous architectural features from First Temple period Israel, featuring two palm volutes (the palm is a common motif in ancient Israel, featured most notably in the temple). Dozens have been found around the country, dating across the spectrum within the First Temple period. Today, they can be seen depicted on the five-shekel coin.

Earlier this summer, we published an article about the “finest proto-Aeolic capital” ever discovered—from Kathleen Kenyon’s 1963 excavations. Yet the immaculate preservation of these newly-discovered capitals far exceeds this example. Of the three large capitals discovered at the site, two of them were found to have been deliberately buried, one carefully placed atop the other, before the rest of the palatial building was destroyed as part of the sixth century Babylonian conquest. “This is one of the mysteries at this unique site, to which we will try to offer a solution,” noted Billig. Perhaps the royal owner of the site—a nobleman, or maybe even the King of Judah himself—had wanted to ensure that the building’s finery was preserved for the prophesied Jewish Return (Jeremiah 29:10).

Together with the three large capitals, miniature proto-Aeolic “capitals” were discovered at the site (the first time such a discovery has been made). These fantastic little carved items served as the caps of balustrade columns. Billig noted about these artifacts:

This is a very exciting discovery. This is a first-time discovery of scaled-down models of the giant proto-Aeolian capitals, of the kind found thus far in the Kingdoms of Judah and Israel, where they were incorporated above the royal palace gates. The level of workmanship on these capitals is the best seen to date, and the degree of preservation of the items is rare.

This combination of large proto-Aeolic capitals with matching miniature balustrades, as part of a Jerusalemite palace, was somewhat “prophetically” depicted several years ago in the below painting of David’s palace in Jerusalem, by Balage Balogh:

The Armon HaNatziv finds were released to the public Thursday as part of a festive event in the City of David. The Armon HaNatziv excavation had been funded by the City of David’s Elad Foundation, led by David Be’eri, as well as the Ministry of Tourism and the Jerusalem Municipality. The Minister of Culture and Sport, Hili Tropper (who attended the event), noted the importance of the discovery:

I am happy and excited with the revelation of the remains from the period of the Kings of Judah. The uncovering of the remains of the building reflects the glorious roots of the Jewish people and our rich past here in the capital city Jerusalem. I see great importance in the work of the Israel Antiquities Authority and in the work of the City of David in their discoveries over the years, which reveal parts of the illustrious Jewish past. This is an opportunity to thank the Ir David Foundation (Elad) that funded this important excavation. The past is the cornerstone of a nation, and the cornerstone of culture, and its discovery also affects the present as well as the future.