Do You Understand English? Then You Can Read Ancient Hebrew*

Here’s how the ancient alphabet of the Israelites has come to be used by nearly 70 percent of the world’s population.
By Christopher Eames • September 29, 2020 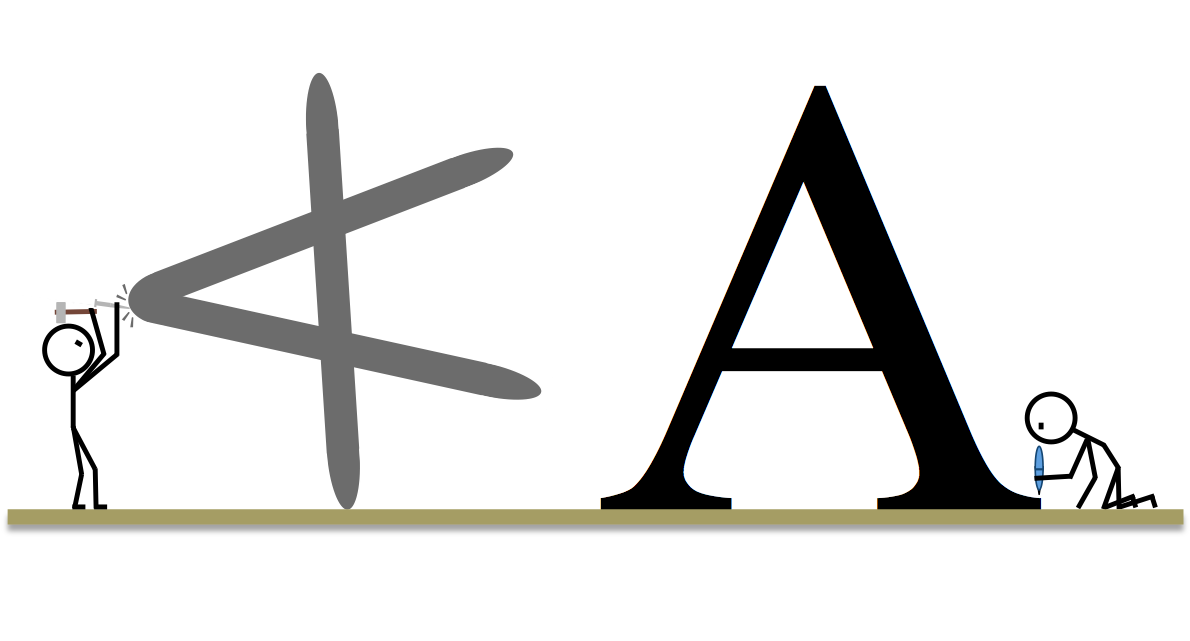 Here’s a crazy proposition for you: You evidently understand English, since you are reading this article; I’ll wager, then, that you can read ancient Hebrew text—the script used in biblical times.

If, however, you only understand modern Hebrew (again, obviously not the case, since you are reading this article), I’ll wager that you cannot read ancient Hebrew.

Let me qualify that. *You, the English speaker, can recognize—even roughly sound out—the letters of ancient Hebrew (rather than understand the language).

Let’s do a little exercise. Here are three English phrases, but spelled with their related, ancient Hebrew letters (mirroring or rotating some of the letters slightly, but not changing their shape at all). Can you read them?

(Here’s a hint—don’t focus in on each individual letter—“step back” and view each sentence as a whole.)

“The apple of my eye.” “I think, therefore, I am.” “A piece of cake.” Did you get all of them? Then congratulations—you can “read” (or rather, “sound out”), ancient Hebrew! (Probably the trickiest letter was the “p”—“p” and “ph/f” are the same in Hebrew. Again, the exercise is somewhat of an oversimplification—based solely on related individual letters, rather than proper pronunciation of the words as a whole.)

The question, then, is this: How did our English letters come to resemble the ancient Hebrew script so closely? Here’s a pretty good table showing the historical transmission in briefest form—note the “Phoenician” line, second from the top:

This second line contains the letters of our above exercise. These Phoenician letters are one and the same as the ancient Hebrew. In fact, the script is often called “Hebrew-Phoenician,” or even simply, “Hebrew.” A strong case has been made that this script began with the Hebrews and was then passed on to the Phoenicians. See the top, “Proto-Siniatic” line, that predates it? This was a script belonging to a Semite community working as slaves in Egypt—dating to roughly the same period as the Israelite captivity.

The modern Hebrew script, on the other hand, followed a very different evolution: After the circa 586 b.c.e. destruction of Jerusalem, the alphabet transformed dramatically, with Aramaic taking hold on the region (the lingua franca of the Babylonian Empire—the book of Daniel is written nearly entirely in Aramaic). It is from this Aramaic “evolution” that both the modern Hebrew- and Arabic-style scripts derive. The Hebrew script changed again around the turn of the millennium into what is known as the rabbinic Hebrew script, not far removed from modern Hebrew—revived in the 19th century into common use by lexicographer Eleazar ben-Yehuda. And while modern Hebrew words are the same, or related to, their ancient Hebrew counterparts, any connection between the alphabets is almost unrecognizable.

So, again, the question: How—and why—did the ancient Hebrew-Phoenician alphabet become the basis of our English language? How did the very same writing system of the ancient Israelites become the most widely used writing system in the world today? After all, there are over 5 billion active users of the various alphabet derivatives from Hebrew-Phoenician (as shown on the map below)—accounting for nearly 70 percent of the world population!

Was It Phoenician Influence? Or Israelite?

Let’s cover the past nearly 3,000 years in a short paragraph. The British Empire, from the 19th to 20th centuries, was the largest empire the world had ever seen—hence why we all speak English. We took our alphabet from the earlier Roman Empire—their Latin alphabet. The Italians of old were in love with ancient Greek culture—an “affair” known as Hellenism—and based their alphabet on the one used by the prior Greek Empire. Over the course of these roughly 3,000 years of history, impressively little has changed about our alphabet given the great length of time. But where, how and from whom did the Greeks get it?

If you’ve skimmed one or two articles or textbooks, you may assume that the Greeks, who originally used a completely different Mycenaean alphabet (actually a “syllabary” known as Linear B), adopted their new “Classical” alphabet from the Phoenicians around the ninth century b.c.e. The Phoenicians were a small coastal nation essentially paralleling the borders of modern-day Lebanon (though perhaps smaller, and more limited to the coastal edge), known for trade throughout the Mediterranean—thus, they must have passed on this alphabet to the Greeks. Further, Greek historian Herodotus claimed that Phoenician King Cadmus gave the alphabet to the Greeks.

But what is the level of evidence these conclusions are based on? Actually, very little is known about the Phoenicians. The Phoenicians are regarded as a “lost” civilization—ironically, due to a lack of written records! Scholars still don’t even agree on whom these people were—whether or not they were distinct from the Canaanites or “other residents” of the Levant—“other” including the Israelites. There is even one position that the Phoenicians were Israelites—because much of the “Phoenician” territory was part of the tribe of Asher (Joshua 19:24-31—see map, right). A general in-between theory is that it was a “melting-pot” region, which at least included an Israelite population. (Indeed, as the Bible repeatedly brings out, it was not unusual for the early Israelite tribes to “go rogue.”)

As for Cadmus, Herodotus claimed that he ruled 1,600 years before his lifetime—around 2100 b.c.e. But this is at least 1,000 years before the Greeks adopted the alphabet—even hundreds of years before the proto-Siniatic development of it. (An unsurprising statement, though, given some of Herodotus’s extremely skewed, nationalistic writings.)

Is the classic “Phoenician” response really the right one? It’s no secret that modern academia has a bias against Israel, the significance of the ancient Israelite and Judahite kingdoms, their impact on the surrounding regions, and the biblical account. This bias meant scholars were “surprised” to find that literacy was widespread in ancient Judah. That when an Assyrian inscription was discovered mentioning King Ahab of Israel with a force of 10,000 soldiers and 2,000 chariots, “scribal error” was assumed. This bias led one famous Israeli archaeologist to admit to Haaretz, “In the past, archaeological evidence has often been stretched to fit the biblical narrative, so researchers today tend to reject any such possible link out of hand” (emphasis added).

Should the possibility of a Hebrew transmission of their alphabet to ancient Greece be “rejected out of hand” as well? Calling the original Classical Greek alphabet “Phoenician” or even “Phoenician-Canaanite” may sound more sophisticated and academic (never mind that from this Iron Age period, far more artifacts with Hebrew script have been discovered than Phoenician, Canaanite, Moabite, Ammonite and Edomite combined—all ancient nations that used the same alphabet). Is the convention justified? Is the jury in on this subject?

Is there any more evidence for a Hebrew transmission to the Greek world—and thus, to ours?

In the next article, we’ll look at the case put forward by certain scholars, clergy and historians—ancient and modern—arguing a Hebrew transmission of the alphabet to Greece vs. a Phoenician. We’ll examine a trove of new archaeological evidence, as well as internal biblical evidence, attesting to a close Hebrew connection with, and influence on, the ancient Greek world—a connection that could explain not only the transmission of an alphabet, but also that of Israelite stories to ancient Greece. And in the third and final article, we’ll examine a biblical individual who may be most responsible for this transmission—and why the Hebrew-Phoenician alphabet became so wildly popular that nearly every country uses a derivative of it today.