The archaeological record of seal stamps in ancient Israel matches closely with the biblical record of their use.
By Christopher Eames • October 14, 2020 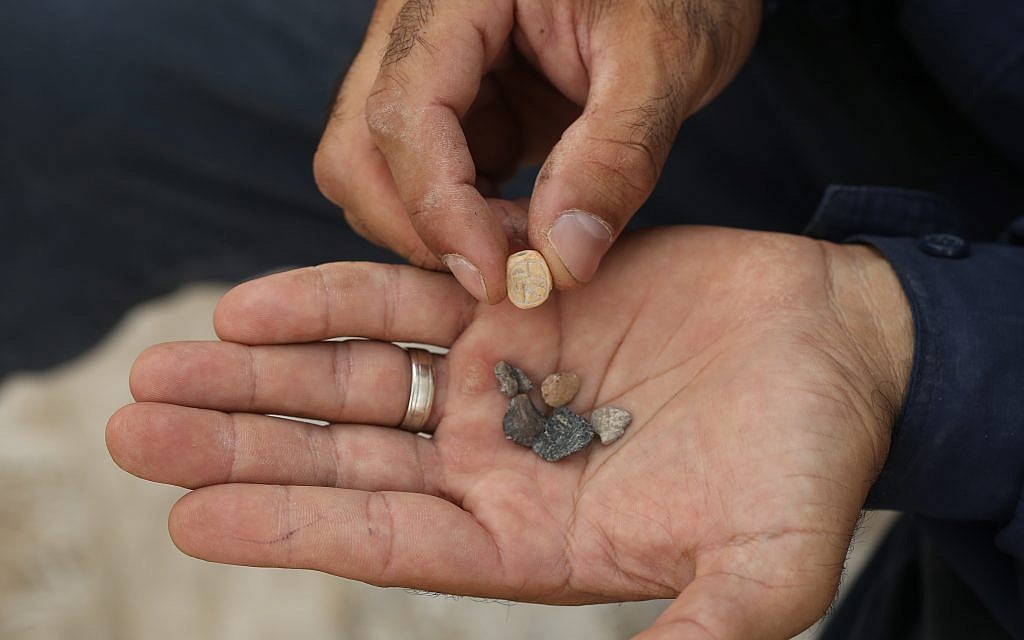 Occasionally in archaeological news, you’ll read about the discovery of a seal or seal impression (bulla) of a famous biblical individual. We’ve reported our fair share on Watch Jerusalem: from the scriptural imagery on the earliest seals of ancient Mesopotamia, to the royal seals of Jezebel, King Hezekiah and Isaiah, to the Persian administrative stamps of Zerubbabel-era Jerusalem.

Thus far, roughly a dozen biblical Israelite and Judahite kings and officials have been confirmed by the discovery of their personal seals. Occasionally on our excavations, we joke about finding—or losing, if we’re in a rush to excavate a certain patch—a seal impression belonging to King David. It’s a sentiment I’ve heard a few times actually: Wouldn’t it be great to find a bulla belonging to David?

Thus far, no such item has been discovered. But actually, the lack of discovery fits well with the biblical account.

Biblical archaeology understandably highlights “proof” of a certain biblical individual discovered. But there’s another, fascinating way to look at seal stamps. Their use is actually mentioned numerous times in the Bible. And the way they are described—when they are described—corresponds neatly to where they appear in the archaeological record.

The Hebrew word for a seal is “hotam,” with the related verb “hatam.” These words, along with their derivatives, are used over 30 times in the Hebrew Bible.

The biblical account begins with a brief mention of seals at the end of the “patriarch” period (the patriarch Judah has one: Genesis 38:18, 25; see also references in Job 14:17; 38:14; 41:15). This is followed by numerous mentions of seals in relation to the Israelite Exodus from Egypt. Exodus 28 and 39 are filled with references to seal stamp-type engraving work.

This fits with the archaeological record. Several early seals have been discovered in and around the land of Canaan, fitting with the late patriarchal period—including one seal type that may directly reference the later patriarch Jacob (see here for more details). And Egyptian seals—known perhaps most famously as “scarabs”—are plenteous during this middle-second millennium b.c.e. period. With the Exodus setting, the Israelites would have been well familiar with the famous royal Egyptian items—hence, the repeat references in the book of Exodus to creating fine inscriptions for the tabernacle service, “like the engravings of a signet” (Exodus 39:14).

What follows this period, however, is a complete dearth of reference to seal stamps. Within the following 600-year period from the Exodus, only one scripture makes an (allegorical) allusion to a general act of sealing, as with a stamp (Song of Songs 8:6). Not until the ninth century reign of Ahab and his evil wife, Jezebel, does the Bible begin to describe the administrative use of seal stamps (note Jezebel’s use of Ahab’s seal to condemn Naboth to death).

This picture, again, fits well with the archaeological record. There is a complete dearth of Hebrew-language seals dating to the judges period, as well as the period of the earliest Israelite kings. That’s not to say that they were completely unknown—we know that Egyptian stamps continued to be used during this time—and basic pictographic stamps have been discovered, such as the “Samson seal” from Beth Shemesh. But there is an utter, glaring void of Hebrew administrative seals during this period in the archaeological record. And it fits well with the biblical account.

From the ninth century onward, however, the picture changes.

We have a tentative ninth century b.c.e. start date, with the mention of royal administrative use in 1 Kings 21:8. And then in the eighth century, the biblical references pick up. The Prophet Isaiah mentions bullae sealing documents three times. (There is also a theory, based on linguistic analysis, that Isaiah translated the book of Job from its original language—if so, attesting to several more references within to sealing. See Craig Davis’s Dating the Old Testament for more information.) The Prophet Ezekiel, around the end of eighth century b.c.e., likewise referenced “sealing” terminology (Ezekiel 28:12).

In the archaeological record, administrative seals likewise begin to emerge in Israel around the ninth to eighth centuries b.c.e. Interestingly, one of the earliest is a royal Phoenician seal, discovered on the antiquities market, belonging to a Jezebel (see our article here for more information on this seal and how it matches up with the biblical figure.) Royal administrative seals become increasingly common into the eighth century—during this period, seals belonging to kings Ahaz, Hezekiah and Isaiah have been discovered, along with those of numerous royal servants to kings Jeroboam II and Uzziah.

On into the biblical seventh to sixth centuries b.c.e., we hit—if we can call it—“peak seal.” The Prophet Jeremiah references seals, including his personal use of them, five times (e.g. Jeremiah 32). The Prophet Daniel references them four, possibly five, times (e.g. Daniel 12:4, 9). And the Prophet Haggai contains a reference (Haggai 2:23).

This is, likewise, the period in which archaeology is awash with seals and seal stamps—literally thousands of bullae and their fragments have been discovered in excavations and on the antiquities market. Many such relate to biblical individuals of this period, such as Nathan-Melech, Jehucal, Shelemiah, Gedaliah, Pashur, Gemariah, Shaphan, Hilkiah and Azariah. Many more contain possible-to-likely references to individuals such as Delaiah, Hananiah, Elishama, Shemaiah, Ishmael, Jaazaniah, Maaseiah, Meshullam, Zaccur, Nahum and Mattaniah. The use of administrative seals in this period is ubiquitous—both in the Bible and in the archaeological record—to the point that an entire building of this period in Jerusalem is known as the “House of Bullae,” after at least 51 were found within (see our article here for evidence linking this scribal chamber to one mentioned in the book of Jeremiah). Dr. Eilat Mazar, whom we assist in her archaeological efforts in Jerusalem, has uncovered some 300-plus bullae within her City of David and Ophel excavations.

And finally, from the fifth century b.c.e.—deep into the Persian period—there are two references in the book of Nehemiah. Of course, post-destruction Jerusalem saw a collapse in governance, but with the Jewish return, evidence has recently been discovered showing a reinstitution of administration, even with the resumption of the use of seal stamps in the later sixth to fifth centuries b.c.e. And besides Nehemiah, the book of Esther references sealing four times within the royal Persian courts at Susa. Persia has its own corpus of royal seal stamps used during this period.

We may not have seal stamps belonging to kings David or Solomon, or any of the famous biblical judges. But even that lack of evidence supports the biblical account. Seal stamps were apparently not a regular administrative item in the land during this period.

There are several ways to view archaeological discoveries. There is the common, face-value approach—the most impressive artifacts that prove biblical personalities. Then there are the simple use of generic names found in any given period, which may not “prove” a biblical figure but attest to the right setting of certain names during certain periods. (Names anciently, as they do today, fell in and out of use.)

And as we have seen, even a dearth of certain archaeological items during a given period can match up with the biblical account. The amount of times an important item, such as a seal stamp or bulla, is mentioned in the biblical text can directly relate to its prevalence “in the ground” at a certain period.

Why is all this important? The common scholarly position is that the majority of the Hebrew Bible is a series of stories imagined long after events it describes—just before or just following the Babylonian destruction. Yet the archaeological record consistently demonstrates the accuracy of the biblical account: from “proven” personalities and geopolitical events, right down to period-specific names, clothing, food items, literacy, methods of transport, rituals, sayings; and even the tiniest of administrative objects used, the seals.