Did King Ahab Really Have 2,000 Chariots?

Archaeological discoveries are often used to ‘fact check’ the biblical account. This time the roles are reversed: A dramatic claim on an artifact was dismissed as ‘scribal error.’ Was it? What does the Bible say?
By Christopher Eames • November 2, 2020 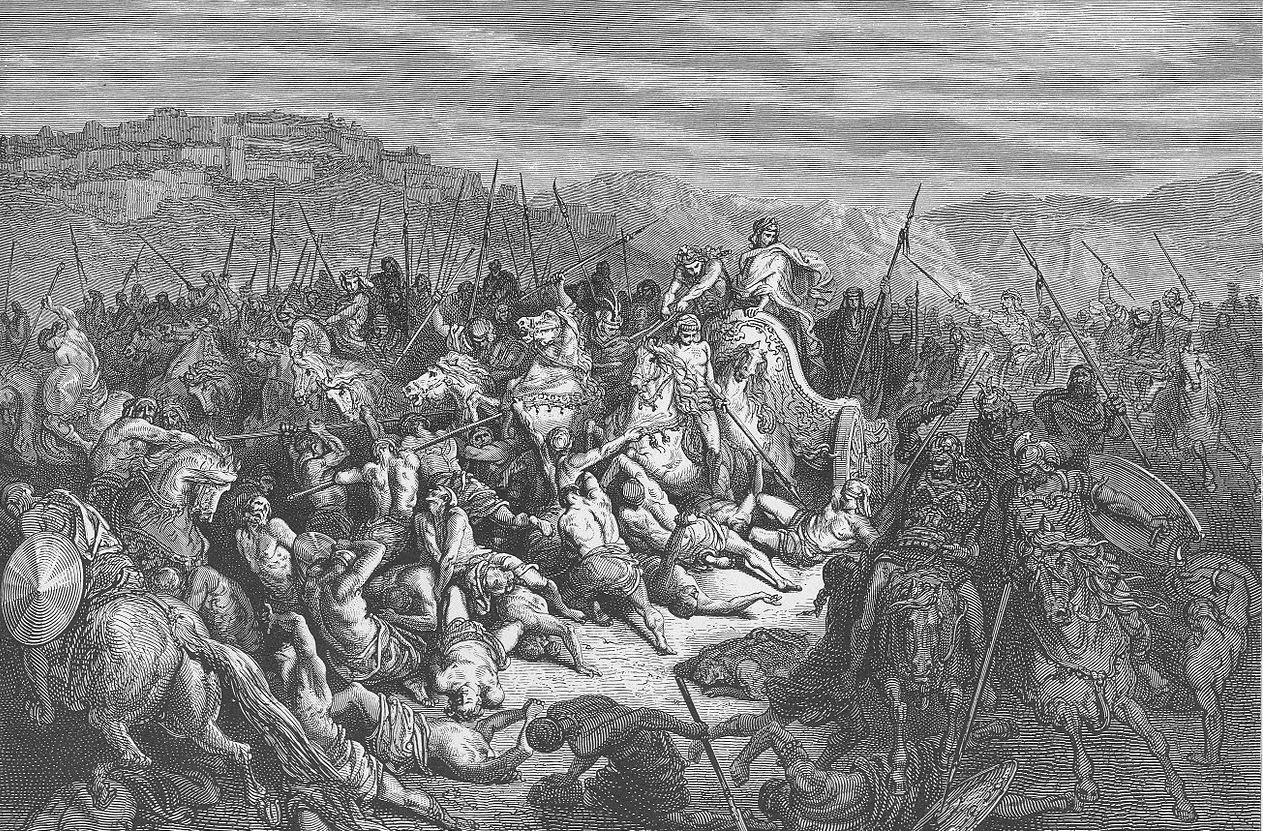 “The Israelites Slaughter the Syrians,” by Gustave Doré (1866), depicts King Ahab on his chariot, leading his cavalry against the forces of Ben-Hadad.
Public Domain

The Kurkh Monolith is an impressive Assyrian artifact dramatically detailing King Shalmanezer iii’s victory at the battle of Qarqar (circa 853 b.c.e.). The stele describes the Assyrian king’s victory against a coalition of 12 kings of the Levant—including Israelite King Ahab.

The 2-meter-tall artifact is notable: It is the first evidence of the existence of King Ahab, and one of the earlier references to “Israel.” However, it provides a hotly contested notation on Israel’s power at this time. Note: This isn’t the biblical account being contested—but the monolith inscription’s testimony. Shalmaneser iii outlines the enemy numbers committed to the fight against him:

A king of Israel committing 2,000 chariots and 10,000 soldiers to a battle? According to a common academic view, this is far too powerful a force to be attributed to Israel. According to the common minimalist approach, ninth-century b.c.e. Israel was a minor, relatively weak tribal sideshow during this period. Certainly not the powerful kingdom described by the Bible—and certainly not powerful enough to contribute 2,000 chariots.

As such, “scribal error” has commonly been assumed for this artifact. Either that, or the inscription is referring to another Ahab—not the biblical king. Where does the evidence lead? First, let’s briefly address the latter point.

Wrong Use of ‘Israelite’?

The “Ahab the Israelite” translation comes from the cuneiform “A-ha-ab-bu Sir-ila-a-a.” The dating of the inscription fits precisely with the timeframe of Israel’s King Ahab, as well as the geopolitical situation in the Levant, and pairs him with the same Syrian king mentioned in the Bible. This would then have to be some other as-yet unknown Ahab from another as-yet unknown, yet extremely large and powerful polity whose territorial name closely matches that of Israel. The coincidences are too great—and as such, the general academic consensus is that this does refer to Ahab the Israelite.

Some, however, take issue with the fact that this would be the only Assyrian inscription to use the term “Israel”—all others use some form of the term “House of Omri” to describe Israel. But this argument lacks historical context. This happens to be the earliest Assyrian inscription referencing the Israelite kingdom. King Omri, the father of Ahab, had only died years earlier—hardly enough time for a dynastic name “House of Omri” to be established and applied to the entire nation, and to have been quickly recognized as far away as Assyria. Instead, the use of the term “Israel” (a term long in use by the Egyptians) makes sense. Likewise, the Syrians referred to the territory as “Israel” during the reign of Ahab’s son. It would not be until two or three kings after Ahab that “Omri” would finally emerge as an established, dynastic territorial term.

Ten thousand Israelite troops, maybe. But 2,000 chariots? This is a huge force any way you look at it. Therefore, either Israel was a powerful entity—or this is a case of scribal error. Tel Aviv University professor Nadav Na’aman proposes that, in essence, an “extra zero” must have been mistakenly added—that the real number was 200.

Typically, scientists use archaeology to “fact check” claims in the Bible. Here, though, we have a situation in reverse—large numbers presented in an archaeological setting. Is there any supporting biblical evidence for or against this claim? To use a biblical saying: “by the mouth of two or three witnesses the matter shall be established” (Deuteronomy 19:15; New King James Version).

From the outset, the Bible itself may appear to reject this number. Deuteronomy 17:16 states that a king of Israel “shall not multiply horses to himself, nor cause the people to return to Egypt, to the end that he should multiply horses”—part of a general position that Israel was to rely on God rather than superior military might (see also Deuteronomy 20).

Yet the story of biblical Israel is in many ways a story of rebellion against God. A century before the reign of Ahab, King Solomon did the exact opposite of these instructions in Deuteronomy (which also included not multiplying wives!). Solomon became a major arms dealer, importing chariots from Egypt and selling them to the northern Syrian and Hittite kingdoms (1 Kings 10:28-29). This would fit with the setting of the Kurkh Monolith, which (besides Israel) describes the Syrians as wielding 1,200 chariots. But the sheer numbers?

Solomon was no mere merchant of horses and chariots. 2 Chronicles 1:14 describes him establishing his own chariot cities. The same verse claims that he owned 1,400 chariots, and had 12,000 horsemen.

Excavations at Tel Megiddo, for example, have revealed a significant area of the upper city designed to accommodate 150 horses—perhaps this was one of Solomon’s original “chariot cities.” These features have been variously dated by archaeologists to the reign of either Solomon or Ahab. (See the reconstruction below. The sign at the site reads, “Assyrian records from the 9th and 8th c. B.C. praise Israel’s skills in chariotry.”) If Ahab really did only send 200 chariots to the battle, this city alone could have made up much of the force (depending on the number of horses per chariot).

The overall significance of horses in ancient Israel is perhaps missed. Numerous scriptures describe Israelite kings living, riding, fighting and dying in their chariots. Chariots are mentioned nearly 200 times in the Hebrew Bible, and horses over 150 times. One of the gates of Jerusalem was specifically labeled the “horse gate” (2 Chronicles 23:15). And during the eighth century b.c.e., the prophet Isaiah writes of the Israelites: “Their land also is full of horses, neither is there any end of their chariots” (Isaiah 2:7).

Most significantly, as far as sheer numbers are concerned, King David is described as fighting a joint Ammonite, Syrian and Mesopotamian force of 32,000 chariots (1 Chronicles 19:7). Of those, he destroyed 7,000 chariots and 40,000 footmen (verse 18). A century later, Egypt’s King Shishak came against David’s grandson Rehoboam with 1,200 chariots (2 Chronicles 12:3).

These are, of course, immense numbers. But they fit with the early historical emphasis on chariot warfare in the Levant. The Battle of Kadesh, fought between the Egyptians and the Hittites in Syria around 1275 b.c.e., is currently the largest-known chariot battle from archaeological evidence. In this battle, 2,000 Egyptian chariots went head-to-head against up to as many as 10,500 Hittite chariots. Was it therefore impossible for this once-Hittite area, 400 years later, to wield a mere fraction of these numbers (totaling 3,940 chariots) against Assyria’s King Shalmaneser?

All the King’s Horses

The biblical account of Ahab’s time period, specifically, reveals that King Ahab was quite literally “attached” to his chariot—and would eventually die in his chariot (1 Kings 22:35; as would his son Jehoram). Ahab was heir to the masses of horses and “chariot cities” of King Solomon—indeed, during the great drought of Ahab’s reign, his chief concern was to send out search parties to “find grass and save the horses and mules alive, that we lose not all the beasts” (1 Kings 18:5).

There is significant mention of chariots during Ahab’s day. Syrian King Ben-Hadad amassed a large chariot force to challenge him; the Syrian chariot force was so large that it required 32 captains over the divisions (1 Kings 20:1; 22:31). Ahab utterly defeated Ben-Hadad, and the two united in a truce (1 Kings 20:34)—likely including the acquisition of Ben-Hadad’s chariots. Further, Ahab controlled large swathes of territory surrounding Israel, including Moab (2 Kings 3:4-5). He would have had additional resources thanks to these territories.

So is the Kurkh Monolith claim of 2,000 chariots of Ahab an extreme, impossible number—a tenfold exaggeration?

The logical conclusion? One must go with the weight of evidence. Multiple biblical, historical and archaeological accounts describe the early Levant, around the start of the first millennium b.c.e., flush with chariots—be it Israel, Syria, the Hittite empire or Egyptian forces. The weight of this evidence—and in this case, the Kurkh Monolith—attests to a powerful and significant ninth-century b.c.e. Israel and Israelite military.

The world’s bestselling book is held in awe by some, in passive discredit by others, and understood by virtually none. Why is that? Order your free copy of The Proof of the Bible to find out.