Iran-backed militias in Iraq are increasing their activities in response to the Iraqi government’s effort to rein them in.
By Watch Jerusalem Staff • October 31 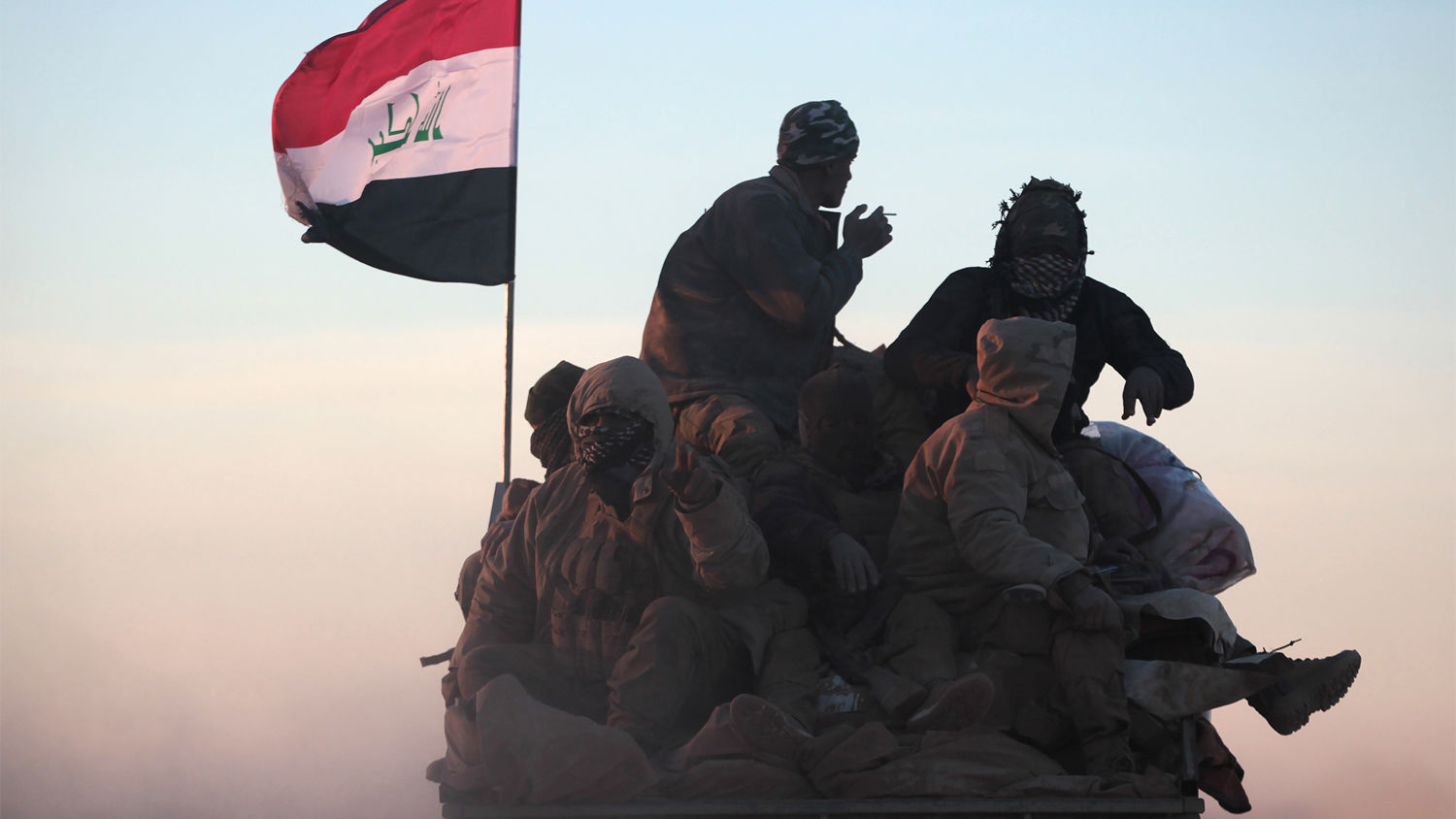 Iraqi forces, supported by the Hashed al-Shaabi paramilitaries, advance near the village of Sheikh Younis, south of Mosul on Feb. 19, 2017.
AHMAD AL-RUBAYE/AFP/GETTY IMAGES

After nearly two decades of fighting in Iraq, the United States issued an ultimatum to the Iraqi government late last month: Prevent the frequent attacks on our soldiers, bases and convoys, or we will shut down and withdraw from our embassy in Iraq.

But dismantling the militias is proving to be an impossible task for the Baghdad government.

In an October 2 statement, former Iraqi Foreign Minister Hoshyar Zebari said that Baghdad’s Green Zone, where most governmental buildings and foreign ministries are located, “should be cleansed from the militias and the pmu [Popular Mobilization Units] presence.”

On Saturday, October 17, pmu loyalists attacked the headquarters of the Kurdistan Democratic Party (kdp), burning the building and raising the pmu flag. On the same day, another pro-Iran militia kidnapped 12 and executed at least eight citizens of the Salahuddin province.

Some claim that the recent attack on the Kurdistan Democratic Party office was in response to the October 2 statement. According to Arab News, however, some observers believe it was motivated by an agreement between the federal government and the Irbil authority to co-manage the Sinjar district, thus ending the militias’ presence and allowing thousands of refugees to return to their homes.

Last month, Iraq’s top cleric, Ayatollah Ali Al-Sistani, called for the disbanding of all militias. However, similar to Hezbollah in Lebanon, some of the militias have become a state within a state, with their own agenda that is in line with Tehran. And under the previous administration, pro-Iran activists were allowed to infiltrate the army and security bodies, as well as key governmental ministries.

This means there is no easy solution for the Iraqi government or the United States. A full American withdrawal would signal victory to Iran, essentially saying the U.S. believes Iraq is beyond saving and has fallen irredeemably into Iran’s hold. That means Iraq would face similar financial sanctions as those against Iran. But if he were to bring the Iran-backed militias to justice for their attacks against the U.S., Iraqi Prime Minister Mustafa al-Kadhimi would likely face revolution from within his own ranks.

But there is hope for freedom-loving Iraqis and for the friends and families of fallen allied servicemen who have died on Iraqi soil.

The U.S. threatening to evacuate its largest diplomatic mission validates a landmark forecast by Watch Jerusalem editor in chief Gerald Flurry made nearly three decades ago. Since 1992, Mr. Flurry has warned of an Iranian takeover of Iraq. Following U.S. President Donald Trump’s declaration of victory against the Islamic State in 2018, Mr. Flurry wrote:

Since Mr. Flurry made that statement, the U.S. has withdrawn from eight facilities or bases in Iraq, consolidating its forces to better protect from the incessant attacks. And now it is threatening to pull out altogether.

Will America hand over Iraq to Iran? Mr. Flurry states in his booklet The King of the South, based on an end-time prophecy in the biblical book of Daniel, that Iraq will fall under the power of the Iranian regime. Please read Watch Jerusalem writer Brent Nagtegaal’s article “America Threatens to Evacuate Its Largest Diplomatic Mission on Earth” to better understand these events and their implications for the future.