After its last facility in Natanz was destroyed, Iran promised to rebuild it. Now construction has begun—underground.
By Watch Jerusalem Staff • November 4, 2020 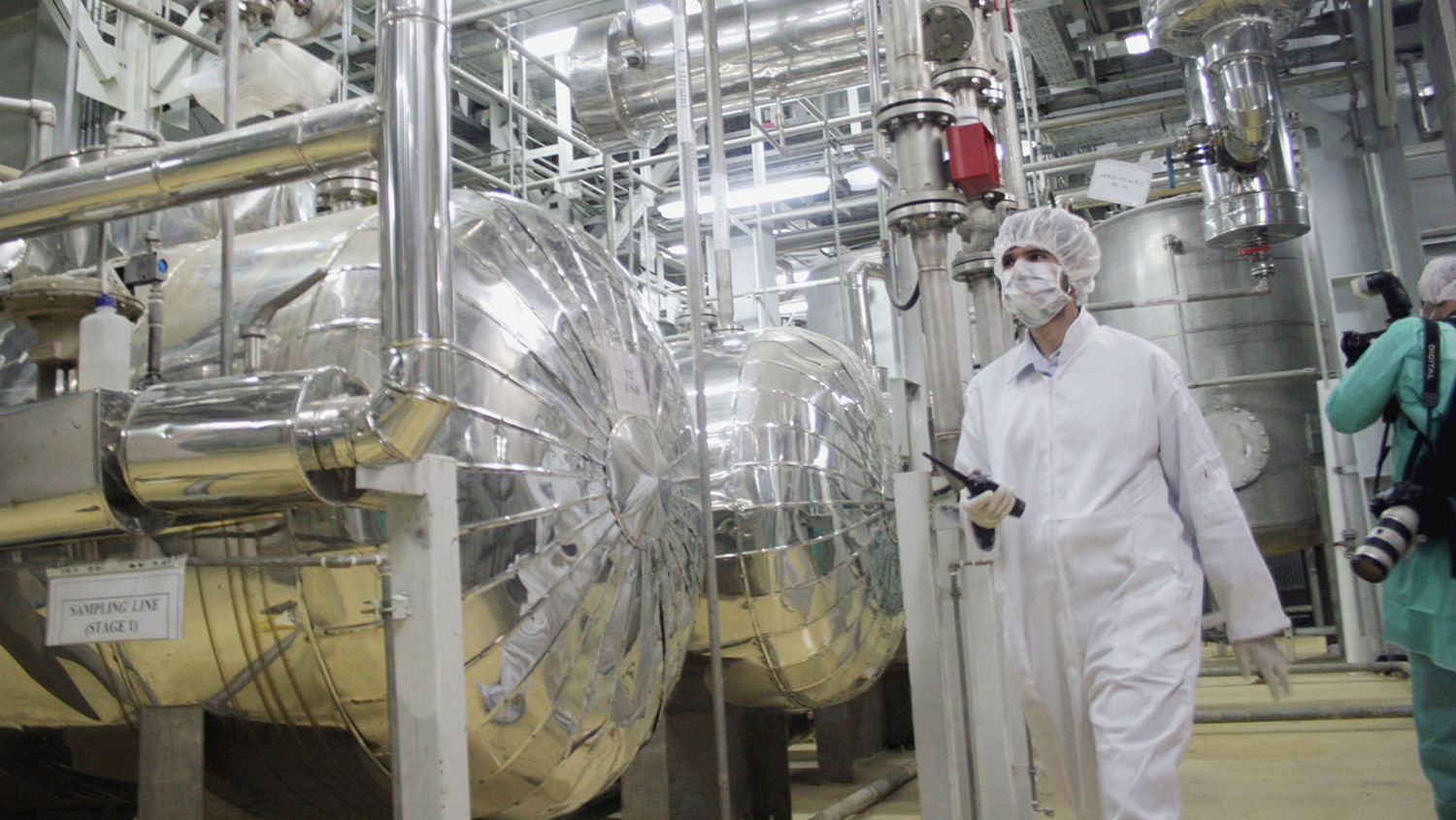 A worker walks inside of a uranium conversion facility in Iran.
GETTY IMAGES

Satellite images from Planet Labs Inc. and inspectors from the United Nations’ atomic watchdog confirmed last week that Iran has started building an underground advanced centrifuge assembly facility. This facility in the mountains around Natanz is replacing the one that exploded this summer in what Tehran called a sabotage attack.

Iran announced it would rebuild the destroyed Natanz facility; those plans are now moving forward.

This is the start of a new and dangerous chapter in the nuclear standoff.

Following a June attack that destroyed a facility linked to the production of solid-propellant rockets, a July 2 explosion destroyed the Natanz nuclear complex. This crucial facility in Iran’s nuclear program was constructed in 2012 to develop advanced centrifuges used to produce weapons-grade uranium for use in nuclear warheads. Only recently has Iran mastered the more advanced IR-4 and IR-6 centrifuges. These advanced centrifuges enable it to enrich uranium at a much higher rate than the IR-1 and IR-2Ms, which made up nearly all of its approximately 20,000 centrifuges over the past decade. Until the July 2 attack, there was concern that Iran could use these advanced centrifuges to weaponize uranium quickly enough that the United States, Israel and others would not be able to prevent it.

When these centrifuges became operable, they would have been moved deep underground, protected by layers of concrete and steel to make it impossible for Israel (or anyone else) to destroy them by military strike. The centrifuges were vulnerable only while they remained aboveground.

After the July 2 attack, Iran is going underground in Natanz.

Chairman of the Atomic Energy Organization of Iran (aeoi) Ali Akbar Salehi announced on September 8 that Iran had begun construction on a new facility to replace the destroyed aboveground facility. He said that it will be built “in the heart of the mountains around Natanz.”

Rafael Grossi, director general of the International Atomic Energy Agency (iaea), told the Associated Press that his inspectors were aware of the construction. “As long as they declared to the iaea in the proper timeframe, there’s no prohibition on putting things underground,” he said.

Following the completion of the new facility, however, Iran may try to expedite the production of advanced centrifuges. The Jerusalem Center for Public Affairs reported that “at the pilot fuel enrichment plant, Iran is enriching uranium in advanced experimental centrifuges, developing a wide variety of advanced centrifuges, and violating the timetable for [research and development] that is included in the jcpoa [Joint Comprehensive Plan of Action].”

The nuclear deal was supposed to limit Tehran’s uranium enrichment in exchange for the lifting of economic sanctions. However, Iran publicly abandoned those limits on enriching uranium, and the U.S. withdrew from the deal in 2018 and ramped up sanctions.

Iran is also violating the jcpoa by enriching uranium with 1,044 centrifuges in the underground Fordow facility near Qom. On September 13, Salehi declared that his organization “activated an enrichment wing in the Fordow nuclear facility … in line with steps to reduce its commitments to the nuclear deal. … We had promised not to enrich using these 1,044 centrifuges, but according to the reduction of commitments, enrichment will be done as needed, and we will also store the enriched materials” (emphasis added).

Iran now enriches uranium to up to 4.5 percent purity, higher than the 3.67 percent allowed under the deal. According to the latest iaea quarterly report, Iran has a stockpile of 2,105 kilograms (2.32 tons) of low-enriched uranium, 10 times greater than the 202.8 kilograms (447.1 pounds) allowed under the jcpoa. Experts say that 1,050 kilograms of low-enriched uranium is usually enough to be re-enriched up to weapons-grade levels of 90 percent purity for one nuclear weapon.

Iran has enough low-enriched uranium to build at least two nuclear bombs, and its breakout time is as little as three months. The 2015 jcpoa was supposed to limit Iran to being a year away from obtaining sufficient fissile material for one explosive device. Installing advanced centrifuges at the enrichment site could shorten the time required for military-level enrichment by a few weeks.

In the midst of these developments, Iran continues to develop long-range missiles capable of launching nuclear weapons against not only Israel, but also Europe. The U.S. is trying to renew the international sanctions against Iran, but Europe, China and Russia are resisting those attempts. They are determined to allow the Iranian regime to continue violating the nuclear deal.

Many now believe it is inevitable that Iran will obtain a nuclear bomb—it is just a matter of time. In a July 8 interview with the Times of Israel, former head of Mossad Shabtai Shavit accepted that Iran would get the bomb. Israel’s goal, he said, was to deter Iran from using it.

That outlook misses one crucial fact: Rationality and logic are often sacrificed on the altar of religion. This is especially true with Iran, which has been ruled by radical Islamist ideology since 1979. The Islamic Republic’s founding leader didn’t value national self-preservation. Above all, he glorified martyrdom in order to spread Islam.

In August 2006, Watch Jerusalem editor in chief Gerald Flurry wrote, “Imagine: Iran is the world’s top terrorist-sponsoring nation. It is about to get nuclear bombs, and its leaders believe a nuclear war will speed the return of their version of the Messiah. That means they are eager for a nuclear war. And once you start a nuclear war, how do you stop it?”

This is why it is alarming to see Iran’s nuclear program moving forward speedily. This new underground facility may take a while to be built, but once it’s up and running, Iran could use the advanced centrifuges to weaponize enough uranium at a fast enough rate to take the world by surprise.

Watch Jerusalem assistant managing editor Brent Nagtegaal, in his article “Can Israel Prevent Iran From Using a Nuclear Weapon?” wrote about the possibility of a nuclear Iran and where these events are leading:

Since 1993, Gerald Flurry has prophesied that radical Islam, led by Iran, would fulfill the biblical role of “the king of the south” mentioned in Daniel 11. … This prophecy says that Iran and its radical Islamist supporters will initiate a violent conflict with a German-led European empire (“the king of the north”). This terrible conflict will thrust the whole world into great calamity. …

This prophecy doesn’t say whether or not Tehran will ever go nuclear. Daniel 11 does, however, show that Iran will grow so confrontational that it will motivate a blitzkrieg-like response from Germany and Europe (explained in our free booklet The King of the South).

Iran is working hard to develop a nuclear bomb. Its pushy foreign policy is leading to war. To understand what is happening, and what the hopeful implications are in all of this, please read Mr. Nagtegaal’s article “Can Israel Prevent Iran From Using a Nuclear Weapon?”