50 years after we discovered the last ones
By Christopher Eames • November 8, 2020 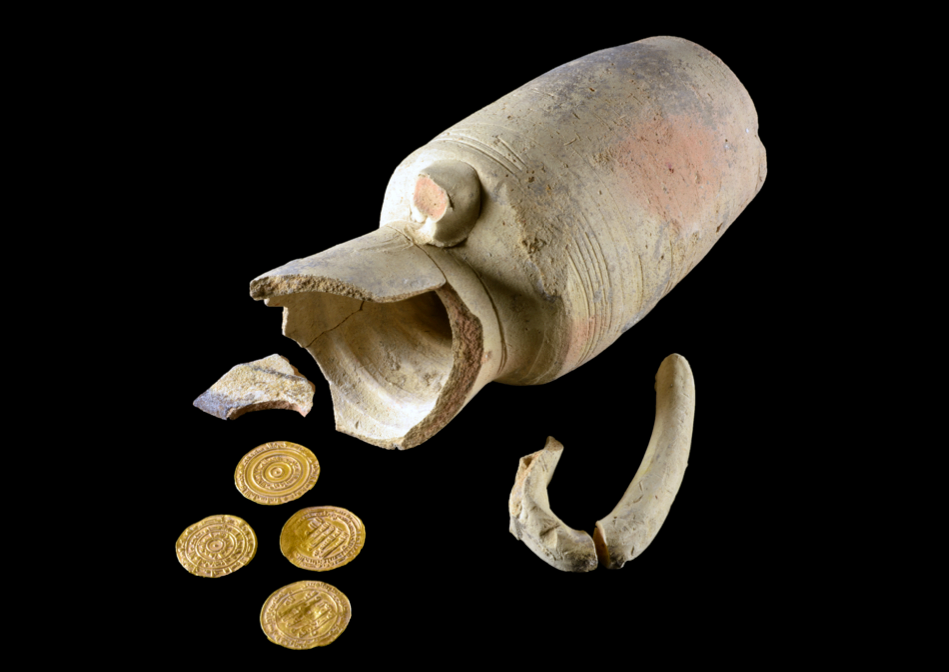 A small, unassuming Islamic-era juglet was unearthed in early October during excavations at the Western Wall plaza. It wasn’t until weeks later that excavation director David Gellman decided to empty the contents. “To my great surprise, along with the soil, four shiny gold coins fell into my hand,” said Gellman. “This is the first time in my career as an archaeologist that I have discovered gold, and it is tremendously exciting.”

The coins are in mint condition, and were immediately identifiable without cleaning. They fit within a tight window (940-970 c.e.), at which time Jerusalem began to be ruled by the Fatimid Caliphate (c. 909-1171 c.e.). Coin expert Robert Kool provides context:

This was a time of radical political change, when control over Eretz Israel passed from the Sunni Abbasid caliphate, whose capital was Baghdad, Iraq, into the hands of ​​its Shiite rivals—the Fatimid dynasty of North Africa, who conquered Egypt, Syria and Eretz Israel in those years. The profile of the coins found in the juglet are a near perfect reflection of the historical events. Two gold dinars were minted in Ramla during the rule of Caliph al-Muti‛ (946–974 c.e.) and his regional governor, Abu ‛Ali al-Qasim ibn al-Ihshid Unujur (946–961 c.e.). The other two gold coins were minted in Cairo by the Fatimid rulers al-Mu’izz (953–975 c.e.) and his successor, al-’Aziz (975–996 c.e.).

The discovery is especially significant to us, as it marks 50 years since the last Fatimid gold hoard was found in Jerusalem—during our own excavations led by Prof. Benjamin Mazar, in partnership with our predecessor Herbert W. Armstrong. Kool continues:

This is the first time in fifty years that a gold cache from the Fatimid period has been discovered in Jerusalem’s Old City. In the large-scale excavations directed by Prof. Benjamin Mazar after the Six Day War, not far from the current discovery, five coin and jewelry hoards from this period were uncovered south of the Temple Mount.

This decade of excavations, beginning in 1967, were the largest to have ever taken place in Israel, with the brunt of the workforce supplied by our predecessor institution, Ambassador College. (Listen to our podcast, below, where I interviewed one of our workmen who was on the scene at the time—and who made some exciting discoveries of his own.) Our archaeology partnership continues to this day—with Prof. Mazar’s granddaughter, Dr. Eilat Mazar.

The discovery of gold treasure is always a “holy grail” of archaeology. But perhaps even more exciting is the human story told by such finds—the multi-faceted, often-troubled story of a Jerusalemite resident in the most contested city on Earth. And 1,000 years later, the history remains relevant—as Israel faces up to the threat of another Shiite “caliphate”: the Islamic Republic of Iran.

Get Our Magazine Request your free subscription
to Watch Jerusalem magazine
Subscribe
Related
Offers
Isaiah’s End-Time Vision
Isaiah had a prophecy for the end time that was twofold. He delivered his message to the temple priests and to the people of Israel.
Request Now