Fortress on the Golan

An exciting discovery: A lookout post, possibly built at the command of David’s father-in-law.
By Christopher Eames 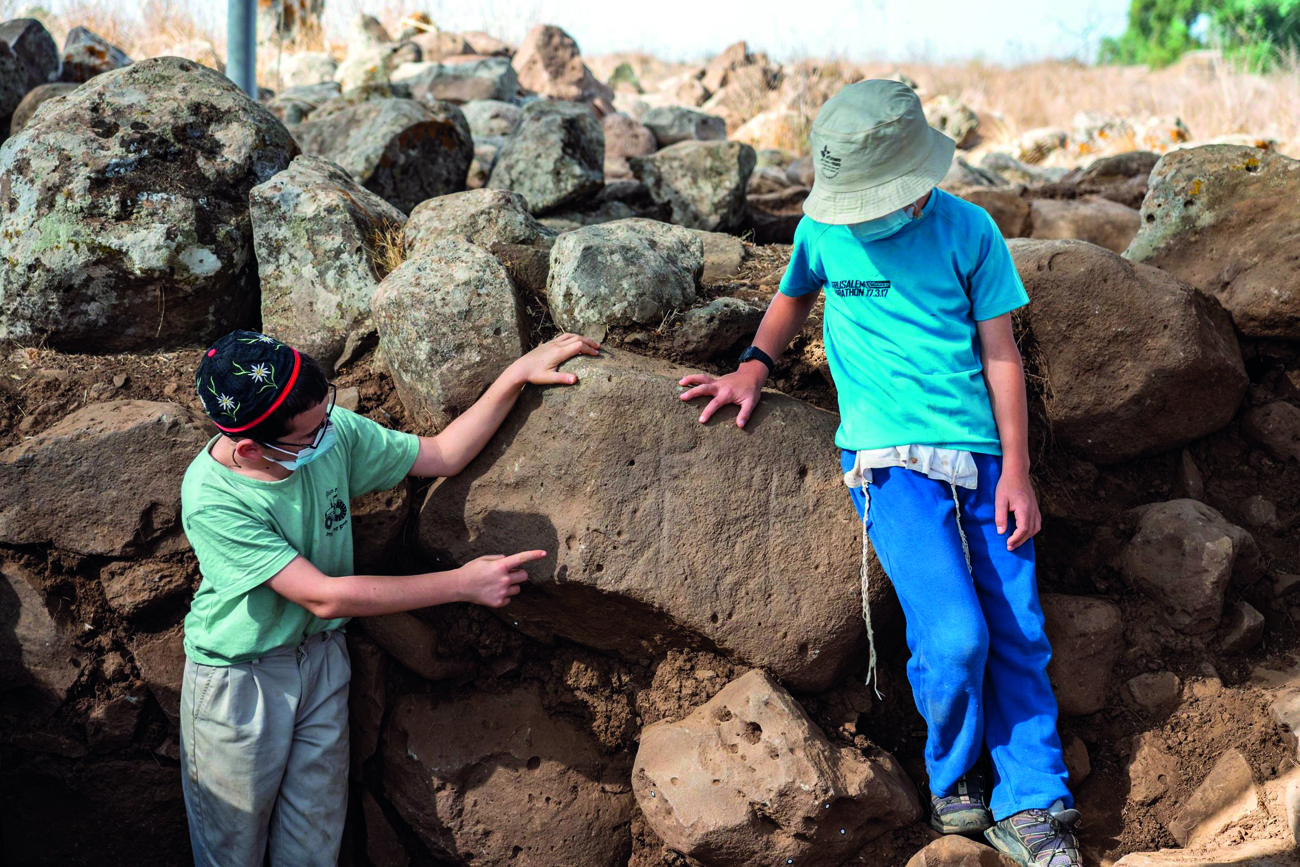 Excavations conducted over the summer by the Israel Antiquities Authority in the far north of Israel have uncovered an impressive fortification dating to the time of King David (11th to 10th centuries b.c.e.). The fortress, discovered near the Golan Heights town of Hispin, is believed to have been built as part of the kingdom of Geshur, which controlled this area and had close ties to King David.

The fortress was situated on a strategic hilltop location overlooking the El-Al canyon, sporting 1.5-meter-thick walls built of large basalt boulders. One clue revealing ownership of the fortress came from one of the wall boulders near the entrance: The stone bears an engraving of two horned moon-gods with outstretched arms.

A near-identical discovery was made last year at Tel Et-Tell (Bethsaida). Tel Et-Tell is believed to have been the capital of the kingdom of Geshur. A number of impressive finds have been found at the site, including a massive 10th-century b.c.e. gatehouse, 6-meter-thick walls, and a basalt stone engraving of the same moon-god dating to the same period. The Hispin gods, then, were probably a local copy of the royal Geshurite-Canaanite moon-god cult centered at this capital.

The Bible contains several details regarding the relationship between King David and the Geshurite kingdom. 1 Samuel 27:8 reveals that David and his men “made a raid upon the Geshurites” during the days of King Saul. (This raid took place while David was residing at the Philistine city Ziklag. Last year, the discovery of this site made world headlines.) Later, David took “Maacah the daughter of Talmai king of Geshur” as his wife (2 Samuel 3:3). It was from this ill-fated, diplomatic union that his son Absalom and daughter Tamar were born.

After Tamar was raped by her half-brother Amnon, Absalom killed Amnon and fled to the land of Geshur, where he stayed for three years to escape the fallout of his actions (2 Samuel 13). Perhaps he even spent time at this fortress, which would have been close to the northern boundary of Geshurite territory.

David secured control over the Geshurite kingdom and even further north (e.g. 1 Chronicles 18; 1 Kings 5:1). The returning Absalom would eventually be killed while attempting to overthrow his father. His daughter Maacah (named after his Geshurite mother), however, would go on to become the wife of David’s grandson Rehoboam—and thus would produce the next heir to the throne of Judah: the sinful King Abijam (1 Kings 15:1-2). Interestingly, she would eventually be deposed by her grandson for the idol worship she brought into Judah—likely the worship of the very same Geshurite moon-god (1 Kings 15:13).

The kingdom of Geshur (including the Hispin fortress) would have been well familiar with the key individuals described in the Bible. Based on the dating, the Hispin fortress may have even been constructed at the order of Talmai himself.

A number of other ancient Geshurite city-sites are known, including Tel Hadar, Tel En Gev and Tel Sorag—but the site at Hispin is unique in its northern location on the Golan. The site has proved exciting to the local community, whose “Golanite” residents and youth have joined the excavations.

Hagar Ben-Dov describes the outreach: “For us in the Israel Antiquities Authority, it’s very important to connect the people that live nearby the excavation to the story of this place. The students are very excited to hear that here we have found buildings from the period they learn about in school—King David, about his son Absalom, about the Iron Age. And when they see it here, in the earth, they feel the connection between the story and the reality.”