In search of peace, Israel is allowing the U.S. to arm a potential enemy with sophisticated weapons of war.
By Watch Jerusalem Staff • December 15, 2020 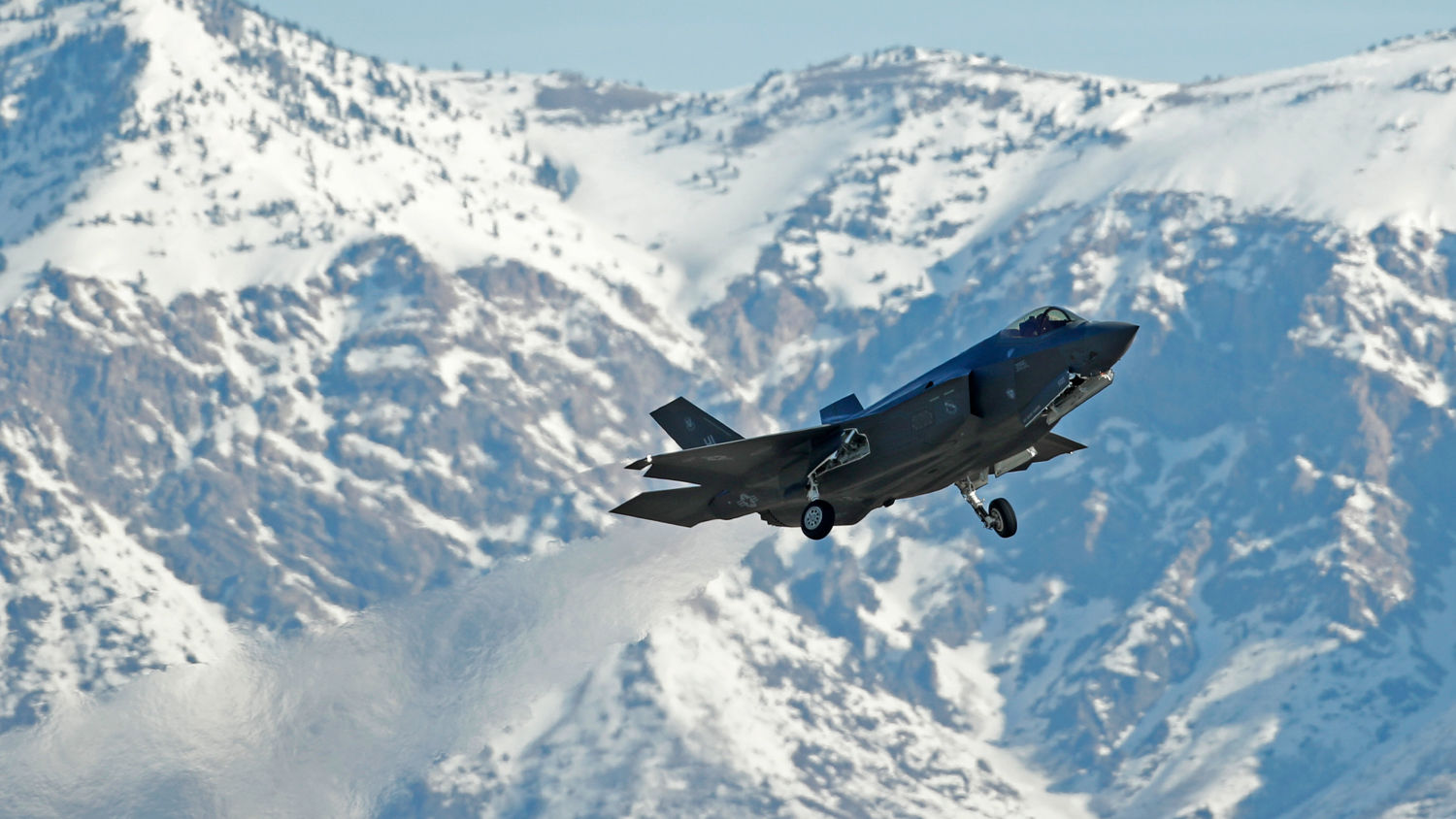 A F-35 fighter jet takes off for a training mission at Hill Air Force Base in Ogden, Utah.
GEORGE FREY/GETTY IMAGES

The United States Senate voted on December 9 to reject a pair of resolutions aimed at stopping the Trump administration’s $23 billion sale of armaments to the United Arab Emirates. After the Trump administration officially notified Congress of the sale last month, a few Democratic senators and one Republican senator attempted to block the deal, saying that one of America’s newest and most sophisticated warplanes should not be entrusted to the U.A.E.

The four resolutions submitted by senators Chris Murphy, Bob Menendez and Rand Paul, according to the Times of Israel, were rejected by the Senate in a vote that split mostly along party lines. The first resolution aimed at blocking the sale of 18 advanced Reaper drone systems fell 50-46; the measures aimed at stopping the sale of 50 F-35 stealth fighter jets was rejected 49-47.

In a Twitter post, Democratic Sen. Chris Murphy pointed to the U.A.E.’s cooperation with Saudi Arabia in Yemen’s civil war, where their troops have “have killed thousands of civilians with U.S.-made weapons.” He also mentioned alleged U.A.E. violations of the international arms embargo in Libya and the possibility of U.S. technology landing in the hands of competitors such as Russia and China. He wrote, “Fueling an arms race in the Middle East is just bad policy—Iran will respond with its own ramp up, and every other Gulf nation will want similar weapons to keep up with the U.A.E.”

I have introduced a privileged resolution (meaning it must receive a floor vote) with @SenatorMenendez and @RandPaul to stop a massive, $23 billion sale of F-35s, Reaper drones, and munitions to the UAE.

This is really important, and I want you to understand why.

Robert Menendez, the top Democrat of the Senate Foreign Relations Committee, asked on the Senate floor, “Do we really think that we can sell this just to the U.A.E. and not have those other countries come knocking on our door and starting a very sophisticated arms race in the tinderbox of the world?”

These senators are not the only ones concerned about the deal. The far-left lobby J Street announced on December 7 that it supported the Murphy-Menendez-Paul resolutions. It argued that the “proposed sale of a massive quantity of advanced, highly destructive weapons systems to the U.A.E. would only fuel a region-wide arms race and exacerbate ongoing conflicts that are having devastating consequences for civilians’ human rights and are imperiling U.S. interests.”

Some Israeli commentators are wary about the deal too.

Jerusalem Post editor in chief Yaakov Katz wrote, “If the U.S. sells F-35s to the U.A.E., it won’t be able to deny a similar request from the Saudis. And even if Israel wanted to lobby the administration or Congress against the sales, its hands will be tied—it’s not going to engage in a political battle against a country with which it just moments ago signed a peace deal.”

In September, Israeli Air Force Chief Amiram Norkin confirmed the potential danger this deal poses to Israel. “These things are not reflected in the strategic analysis as endangering Israel next week,” he said. “These are things that could produce processes that may, in the long-term strategic balance, be less optimal for the State of Israel.”

In stark contrast, however, the Israeli government officially announced on December 7 that it does not object to the proposed sale.

Ambassador to the U.S. Ron Dermer said that Israel is “very comfortable” with Washington’s proposed sale and stressed that he is far more concerned about President-elect Joe Biden’s plan to reenter the Iran nuclear deal.

“We believe that the U.A.E. is an ally in confronting Iran, and we do not believe that this arms package will violate the U.S. commitment to maintain Israel’s qualitative military edge,” Dermer said in a joint interview on msnbc with U.A.E. Ambassador to the U.S. Youssef al-Otaiba.

Washington is looking for ways to make the F-35 more visible to Israeli radar systems. A 2008 U.S. law and decades of precedent show the U.S. is committed to making sure Israel is stronger militarily with better defenses than other Middle East nations. Esper told Gantz that the “cornerstone of our defense relationship is preserving Israel’s qualitative military edge in the region.”

Dermer told the Times of Israel that both Israeli Prime Minister Benjamin Netanyahu and Defense Minister Gantz signed off on the U.A.E. arms deal—something that doesn’t happen often in Israeli politics. Within minutes of securing their assurance of a compensation package from the U.S., Netanyahu’s office released a joint statement on behalf of himself and the defense minister saying that the Israeli government would not object to the supply of advanced weapons to the U.A.E.

Israel’s confidence in this deal with the U.A.E. is based on one thing: a common enemy in Iran. In fact, it’s Iran’s pushy foreign policy, along with the U.S. withdrawal from the Middle East, that motivated this deal in the first place. But that outlook is short sighted.

Watch Jerusalem assistant managing editor Brent Nagtegaal wrote in “Arming Israel’s Future Enemy” that “as is often the case in the Middle East, regime change is always possible, which could see the F-35s fall into the hands of a future adversary. It is the long-term forecast that has Israelis uneasy about the deal.”

These deals represent a relationship more of convenience than of a newfound love between Gulf Arabs and the Jewish state. It will not take much for this relationship to fall apart.

In “Deadly Flaw in Mideast Peace Deals,” Watch Jerusalem editor in chief Gerald Flurry wrote of the Abraham Accords as “a relationship of convenience, rooted in the need to counter the radical Islamic state of Iran.”

Biblical prophecy reveals that the Iranian threat will soon be removed. Daniel 11:40-41 describe a colossal clash between the “king of the north” (German-led Europe) and the “king of the south” (Iran-led radical Islam). …

After crushing Iran, Germany will “enter also into the glorious land, and many countries shall be overthrown …” (verse 41). Germany and its European allies will enter “the glorious land,” Jerusalem—not by force, but under the guise of peace. The indication here is that Israel will actually invite the Germans in because they believe they already have peace with them.

The current peace deals between Israel and the Arab states are creating this sense of security. But Israel should be more aware of history and prophecy!

What awaits the Jews at the hands of this European-Arab alliance is one of the most treacherous betrayals in history!

The anti-Iran alliance now forming between the Gulf states and other Arabs was prophesied in Psalm 83. As the Anchor Bible explains, this alliance has never formed in history—it is specifically for the latter days. And one nation not mentioned as part of this alliance is Israel.

The Psalm 83 alliance will come together to counter Iran, but the main purpose of this alliance is to destroy Israel. When considering the high-tech military hardware the U.A.E. is set to receive, this prophecy adds a terrifying dimension.

Mr. Flurry explained the “deadly flaw” in the peace plan and discussed the true peace soon to come to this region in his article “Deadly Flaw in Mideast Peace Deals.” Please read that article and watch Mr. Flurry’s Key of David program titled “Psalm 83 Prophecy” to see where the peace deals fit in the prophetic timeline leading to the coming of the Messiah.