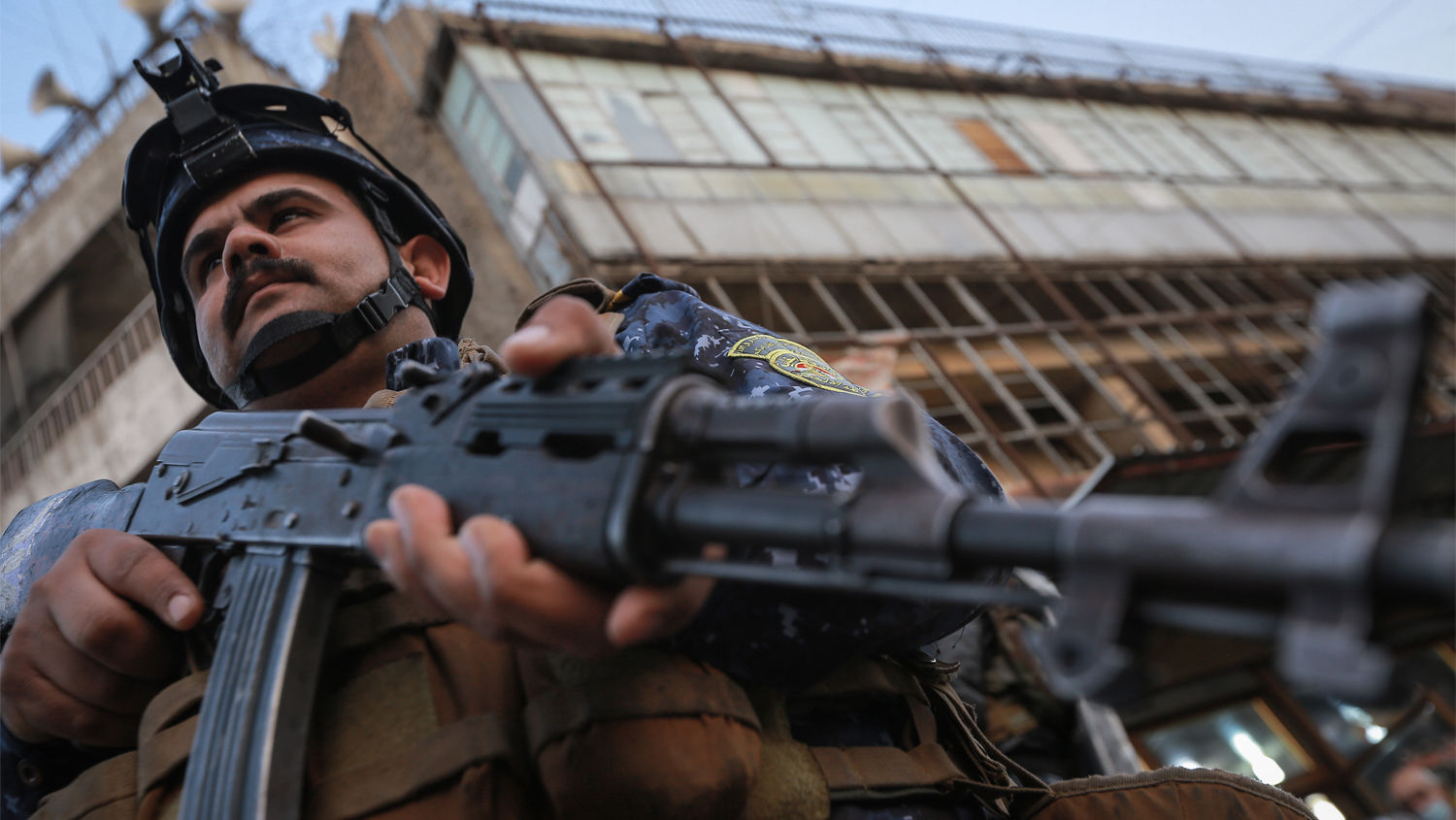 An Iraqi police officer stands guard near the U.S. Embassy in Baghdad a day after several rockets were fired into Baghdad’s Green Zone.
AMEER AL MOHAMMEDAW/PICTURE ALLIANCE VIA GETTY IMAGES

Iran-backed Popular Mobilization Forces (pmf) in Iraq launched eight rockets at the United States Embassy in Baghdad, Iraq, on Sunday. Despite the activation of the embassy defenses, one housing area was damaged and at least one local civilian was killed.

These attacks in the fortified Green Zone are relatively rare due to the site’s heavy defenses and location in the capital. The fact that forces were able to successfully carry out the attack speaks of an inside job.

The ongoing hostility of pmfs in Iraq and the tacit approval of the Iraqi government are all part of the legacy established by late Iranian Gen. Qassem Suleimani.

The attack has been interpreted in part as a “welcome” to United States presidential nominee Joe Biden and his assembling foreign-policy team. But more clearly, the attack is a sign of growing unrest in the lead-up to the anniversary of the assassination of Suleimani.

The Islamic Revolutionary Guard Corps (irgc) Quds Force leader was killed in a U.S. air strike on January 3. In recent weeks some U.S. Embassy personnel were withdrawn as a security measure. Indications are that American forces were preparing for Iran to try some kind of anniversary retaliation. Since the death of the general, the looming threat of reprisals has been hanging over the Middle East.

U.S. President Donald Trump tweeted in response to the most recent attack: “Our embassy in Baghdad got hit Sunday by several rockets. … Guess where they were from: Iran. Now we hear chatter of additional attacks against Americans in Iraq ….” He then added, “Some friendly advice to Iran: If one American is killed, I will hold Iran responsible. Think it over.”

Regarding Iran’s efforts to infiltrate and destabilize the Middle East, Suleimani was seen as the grand strategist. He was in Russia speaking at the Kremlin. Then he was in Syria hobnobbing with President Bashar Assad. Then he was inspecting troops in Lebanon. Then leading the pmf in the fight against the Islamic State. Despite heading up the international arm of a foreign terrorist organization, he seemed to traverse the region unchallenged. But when his convoy was vaporized near the Baghdad International Airport, so too was the brief era of Iranian impunity in the post-Islamic State world.

Suleimani’s death was extremely public and extremely embarrassing to Tehran. In a thunderous instant American firepower had struck at the highest levels of the Iranian regime. The world immediately began to consider what retaliation might come from such a high-profile killing. President Hassan Rouhani promised that Iran “will take revenge.” It launched rockets at a number of U.S. bases in Iraq, but with no casualties. On January 9, two Katyusha rockets were fired into the Green Zone. But again there were no casualties.

Iran’s limited response could be seen as the result of President Trump’s foreign policy toward the rogue regime. Unlike his predecessor, Mr. Trump has shown himself unafraid to threaten tougher punishments for Iran. But with the media talking about a Biden presidency, it is clear Iran is returning to a pushy pre-Trump footing.

During the Obama years, Iran actively targeted U.S. forces throughout the region—and often with Iraqi aid. There was no fear of U.S. reprisals. Instead, the Obama presidency bent over backward to appease the belligerent Iranians while their influence in Iraq and the broader Middle East continued to grow.

Biting the Hand That Feeds Baghdad

For the past four years it has been in Iraq’s best interest to contain its aggression toward America. Iraq has been in dire need of U.S. help through the years of the Islamic State crisis. At the height of the problem, when terrorists were knocking at the gates of Baghdad, America was called on to provide air cover—which led to working alongside Iran.

But as the years pass, the appreciation fades. Aggressive anti-Americanism is reemerging within Iraq’s political sphere—just as Suleimani demanded.

We are seeing a return of Iraq’s “old guard.” Many of these men owe their careers to the Iranians, Suleimani in particular.

Take Nouri al-Maliki for instance. Maliki served as Iraqi prime minister from May 2006 to September 2014. Of all the Central Intelligence Agency-approved candidates for prime minister, Maliki was Suleimani’s favorite. In fact, Suleimani brokered the deal between the Shiites and Kurds that led to Maliki’s election victory. Maliki’s subsequent eight years in office made him the longest-serving prime minister since the formation of the Republic of Iraq. In that time, he gained a reputation for turning a blind eye to Iran’s Shiite militias in the country.

Today, Maliki is leader of the Dawa Party and a key leader of the broader Bina’a bloc, bringing him extremely close to the levers of power in the nation. He did not land here by accident—nor was his arrival without kickbacks for Iran.

Notice the conditions Suleimani attached to the support of Maliki, as reported by the New Yorker in 2013:

Most remarkable, according to the Iraqi and Western officials, were the two conditions that Suleimani imposed on the Iraqis. The first was that Jalal Talabani, a longtime friend of the Iranian regime, become president. The second was that Maliki and his coalition partners insist that all American troops leave the country. “Suleimani said: No Americans,” the former Iraqi leader told me. “A 10-year relationship, down the drain.”

It worked. America was pushed out of Iraq by 2011. With just a few thousand troops remaining today, the U.S. is completely outnumbered by Iran-funded pmfs. Making matters worse, the pro-Iran politicians are coming back into power.

Following Sunday’s attack on the Green Zone, former Intel Officer Michael P. Pregent tweeted out the “Anatomy of a Rocket Attack on the U.S. Embassy.” He explained how the Iraqi government is not only aware of an impending attack, but actively working to support it.

After the briefing, Prime Minster Mustafa al-Kadhimi stands down the International Security Forces in the area—paving the way for the attack. Quick Reaction Force is also told to keep away. To make sure the U.S. doesn’t see what is about to happen, intelligence, surveillance and reconnaissance are also grounded.

The operation is then led by Hadi al-Amiri, the pro-Iran leader of the Fatah Alliance, which includes the political branches of the pmf. This alliance is comprised exclusively of those groups that receive funding from Iran.

Then Abu Fadak, the leader of the pmf and former secretary general of Hezbollah, and Qais Khazali, head of the Asaib al-Haq terror group, direct their men to start lobbing missiles.

The result is an attack on the U.S. Embassy in the heart of Baghdad. And nobody can seem to find out exactly who shot the missiles. And they never will. To make sure, the Iraqi government has put Fadak in charge of investigating the irgc attack. “In other words,” Pregent wrote, “the puppet government in Baghdad is directed by Tehran to put Iran’s man in Iraq in charge of covering up the attack.”

From start to finish, this team effort paints a picture of Iraq-Iran cooperation to kill U.S. personnel in the Green Zone. And even if Pregent’s rundown is not completely accurate, the fact remains that Iran-backed pmf troops could not carry out these brazen attacks without Iraq’s support.

If Suleimani were alive, he would be pleased to see the Iran-Iraq relationship flourishing in exact accordance with his plans. The U.S. is out; Iran is in.

Watch Jerusalem editor in chief Gerald Flurry has forecast a full Iranian takeover of Iraq. Since 1992, he has pinpointed Iran as the fulfillment of a Bible prophecy in Daniel 11: “And at the time of the end shall the king of the south push at him: and the king of the north shall come against him like a whirlwind, with chariots, and with horsemen, and with many ships; and he shall enter into the countries, and shall overflow and pass over” (verse 40).

In his booklet The King of the South (free upon request), Mr. Flurry shows how Iraq is prophesied to join this “king of the south,” or radical Islam led by Iran. For more information, read Mr. Flurry’s 1994 article “Is Iraq About to Fall to Iran?” (updated in 2003, when the U.S. ousted Iraq’s Saddam Hussein from power) and The King of the South.

The prophecies of the Old Testament are coming alive in Baghdad today. Suleimani’s dream is kept alive by those he helped put in place—those whom Iran finances today. A year on from the death of the Iranian general, the truth is plain to see. Iran has won the war for Iraq.