Palestinian factions put aside their differences to face a common enemy. What do the joint drills mean for Israel?
By Watch Jerusalem Staff • January 5 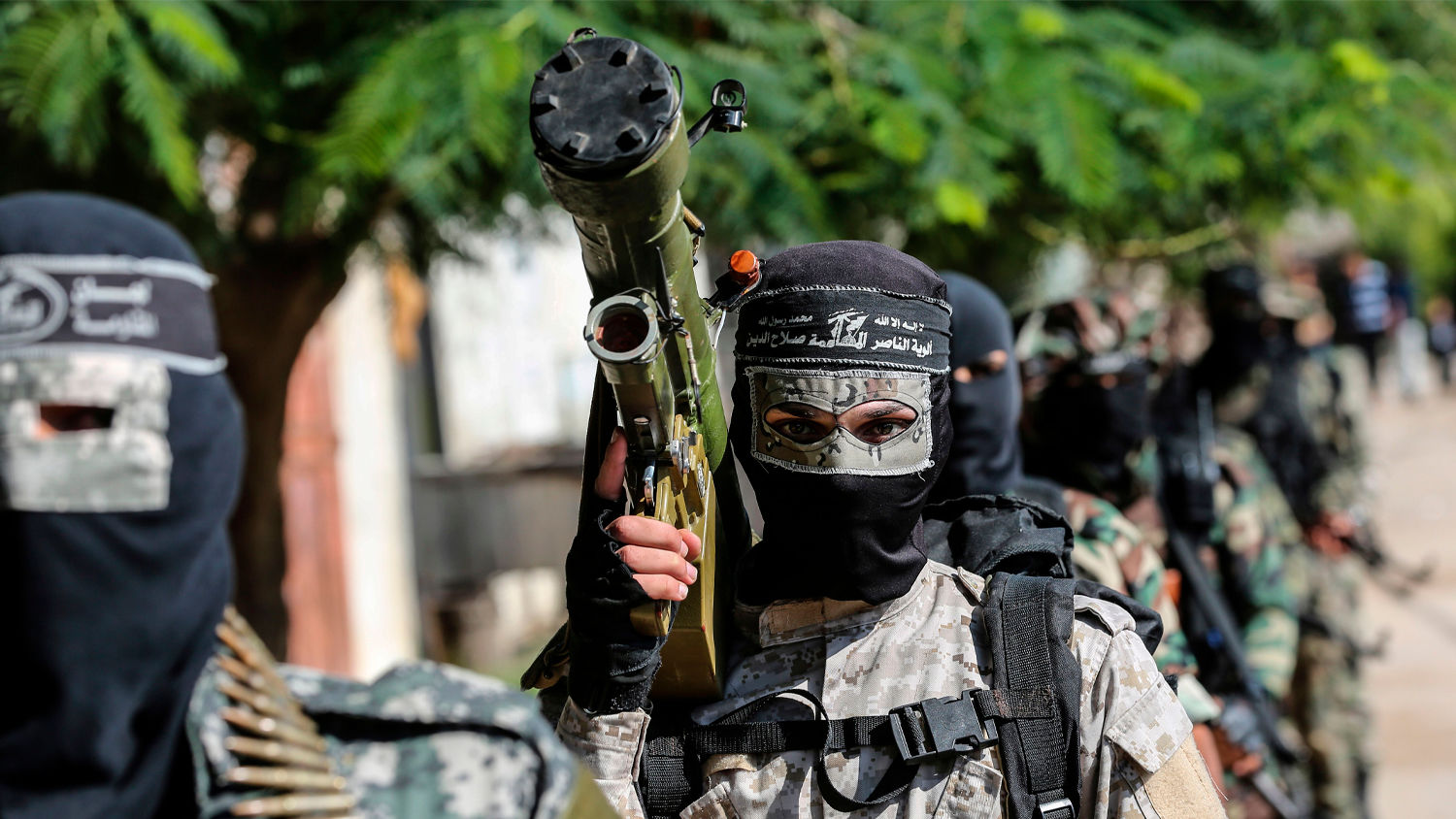 Several armed groups in the Gaza Strip participated in drills on December 29 that Palestinian sources say are part of an effort to build a military. The Jerusalem Post reported that these were the first joint exercises held by factions from Hamas, Palestinian Islamic Jihad and other local groups.

The “a-Rukn a-Shadid” (“Strong Foundation”) drills began with an announcement by Abu Hamza, spokesman for Palestinian Islamic Jihad’s armed wing, the al-Quds Brigades, who stated that the “defensive exercise affirmed our readiness to defend our people.” Hundreds of gunmen participated in the land, sea and air exercise, some firing missiles toward the Mediterranean Sea and some piloting drones over the Gaza Strip. The event was heavily publicized on social media and other news platforms.

Cooperation between Gaza’s differing factions has been rare, so these exercises are significant, especially since Palestinian elections might be held later this year.

Palestinian jihadists likely intended the drills as a response to exercises conducted by the Israel Defense Forces in the area in recent months, including a multi-day Northern Command drill called “Lethal Arrow” that involved thousands of army, navy and air personnel, military intelligence officers and others and simulated war with Hezbollah. Southern Command and the Gaza Division held another drill testing the readiness of all military branches for confrontation with Hamas.

According to the Palestinian terrorist groups, this drill in Gaza aimed to send a “message of deterrence” to Israel. “The main message is that the Palestinian resistance groups are ready to respond to any Israeli aggression,” a Hamas official in the Gaza Strip told reporters. Senior Hamas official Ismail Radwan said the joint military exercise in Gaza was meant to deter Israel from conducting future military strikes in the Gaza Strip.

This drill also showed that the Palestinian factions in the Hamas-ruled enclave want to establish a regular military. Abu Hamza said, “The leadership of the occupation needs to realize that another adventure against our people will be met with full force and unity, accompanied by many surprises. The armed groups are today stronger and more capable of confronting and deterring the enemy. We won’t allow the enemy to impose rules of engagement on us.”

Some Israel Defense Forces officers say that Tuesday’s drill in Gaza poses no immediate threat to Israel, and the event appears to be more of a publicity stunt, with Hamas advertising it ahead of time and during the drill, and inviting journalists from the Arab world and the international community to watch.

The Jerusalem Post wrote that “Hamas doesn’t really need to hold such large-scale media-focused events to improve its military power. The military wing of the organization carries out drills on a daily basis and regardless, would not want to necessarily reveal its true capabilities to Israel and the world.”

The terrorist groups were also using this event to send a warning to the Arab states who have signed peace agreements with Israel. In an announcement just before the drill, Abu Hamza strongly condemned these agreements, saying, “Those who establish relations with the occupation will end up in the dustbin of history. … We won’t allow the enemy to prey on our people, and our weapons are ready.”

Although Palestinian terrorist groups, even when combined, are nowhere close to a powerful, unified military, events like these drills are worth watching closely. The Fatah faction has controlled the Palestinian Authority for years. Its leader, Mahmoud Abbas, has remained president long after his term officially ended in 2009. Although many Palestinians in the West Bank are suspicious of Hamas leadership, they are also tired of years of corrupt rule from Abbas. If Hamas can gain control of the Palestinian Authority, it will be able to extend its control over the West Bank, and put more populated areas of Israel in range of its weapons. Palestinian leaders have repeatedly said if they are given statehood, they must control East Jerusalem and the Temple Mount. A Hamas control of the PA would inevitably mean an armed struggle East Jerusalem.

For decades, Watch Jerusalem has forecast that half of Jerusalem will fall into the hands of Islamists. A prophecy in Zechariah 14 indicates that Palestinians will eventually succeed in this. And this prophecy holds sure, even as Israel looks to become increasingly sovereign in the West Bank.

Hamas and other Palestinian factions are overcoming some of their differences to work together and even consider forming a more regular, more permanent military. Continue to watch Jerusalem. More Palestinian drills may be ahead, and Bible prophecy states that Islamist aggression will lead to a massive chain reaction that will consume the whole world. And it all starts with the fall of East Jerusalem. Although these prophecies are hard to consider, there is peace in their latter end. To understand more about where these events are leading, please read Watch Jerusalem editor in chief Gerald Flurry’s article “Jerusalem Violence Triggers the Coming of the Messiah.”