In its biggest move toward a nuclear bomb, Iran has reduced its nuclear breakout time to six weeks.
By Watch Jerusalem Staff • January 5 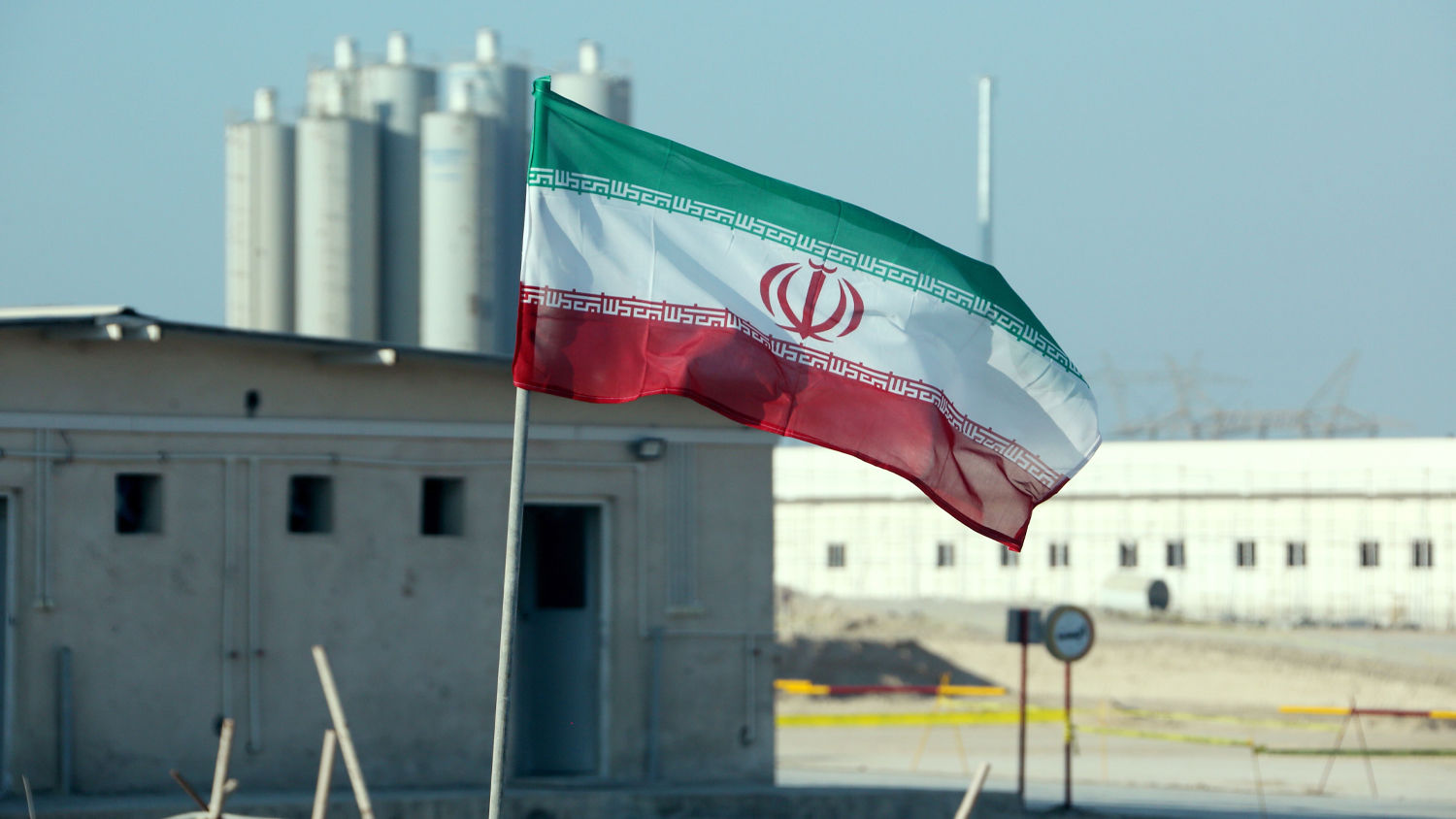 A picture taken on November 10, 2019, shows an Iranian flag in Iran’s Bushehr nuclear power plant, during an official ceremony to kick-start works on a second reactor at the facility.
ATTA KENARE/AFP/GETTY IMAGES

Iran told the International Atomic Energy Agency (iaea) on January 4 that it has begun the process of enriching uranium up to 20 percent purity. This concentration of uranium, which Iran hasn’t produced since before the 2015 nuclear deal, could reduce the time it needs to produce a nuclear weapon from three months to as little as six weeks.

The day after this announcement, the head of Iran’s Atomic Agency, Ali Akbar Salehi, said that the Islamic Republic is installing 1,000 new centrifuges to help increase the production of enriched uranium. He also revealed that Iran has increased its supply of yellowcake by 8-fold in the last two years, from 4-5 tons to 35-40 tons.

The Iranian regime’s announcements come as a result of a law recently approved by Iran’s parliament and Guardian Council in response to the November assassination of top Iranian nuclear scientist Gen. Mohsen Fakhrizadeh. The law calls for 20-percent enrichment, installation of advanced centrifuges at Natanz and Fordow nuclear facilities, and the halting of iaea inspections. All of these actions violate the 2015 Joint Comprehensive Plan of Action nuclear deal that Iran signed with the five permanent members of the United Nations Security Council and Germany.

Reports from November and December show that Iran started building an underground advanced centrifuge assembly facility at Natanz and engaged in similar construction at its nuclear facility at Fordow, almost certainly for the purpose of protecting them from potential airstrikes.

“Director-general Rafael Mariano Grossi has informed iaea member states that Iran today began feeding uranium already enriched up to 4.1 percent U-235 into six centrifuge cascades at the Fordow Fuel Enrichment Plant for further enrichment up to 20 percent,” the iaea told the Jerusalem Post. This is a blatant rejection of the nuclear deal, and the most significant nuclear step Iran has made in the last five years.

Israeli Prime Minister Benjamin Netanyahu said in a statement on January 4, “Iran’s decision to continue violating its commitments, to raise the enrichment level and advance the industrial ability to enrich uranium underground, cannot be explained in any way except as the continued realization of its intention to develop a military nuclear program. Israel will not allow Iran to manufacture nuclear weapons.”

In a 2012 speech to the United Nations General Assembly, Prime Minister Netanyahu drew his red line for what would prompt Israel to attack Iran. He defined this line as Iran producing enough 20-percent enriched uranium to create one bomb.

Natural uranium contains 0.7 percent of the U-235 isotope that is used in nuclear reactions. Enriching this ratio to 20 percent concentration is the most difficult and time-consuming part of the technical process. Uranium enriched to 20 percent is only a small technical step away from becoming 90 percent enriched weapons-grade uranium.

In the enriching process, the uranium ore is crushed and treated with acids to produce a concentrated uranium oxide known as yellowcake. To increase the concentration of the isotope U-235, the uranium is then converted to uranium hexafluoride gas, and the isotopes are separated. Iran does this using thousands of centrifuges that spin the gas to separate the heavier isotope, with the slightly enriched gas feeding from one centrifuge into the next. These lines of centrifuges are called a cascade.

United States Secretary of State Mike Pompeo said in a press statement on December 11, “The United States condemns the law recently approved by Iran’s Majles and Guardian Council, which is nothing more than the regime’s latest ploy to use its nuclear program to try to intimidate the international community.” He added, “The international community must not reward the regime’s dangerous gamesmanship with economic appeasement.”

Under this new Iranian law, the European signatories to the 2015 nuclear deal have until February to reduce their compliance with American sanctions on Iran’s energy and financial sectors. After that, the nuclear measures come fully into effect. Yet, Iran has already started implementing this law by building facilities underground, and now it has started enriching. All that’s really left is for the Iranian regime to block iaea inspectors.

The Trump administration withdrew from the nuclear deal and has implemented a policy of maximum pressure on Iran. Joe Biden has promised that, as president, he would re-join the agreement on the condition that Iran returns to strict compliance. Yet Iran has become even less compliant.

With only two weeks before the United States presidential inauguration, Iran is banking on the Trump administration having too little time to respond and on the Biden administration being too lenient to respond.

After Biden made comments about Iran’s ballistic missile program recently, Iranian Foreign Ministry spokesman Saeed Khatibzadeh pushed back hard, saying, “Iran’s defense capability has never been and will not be negotiated. We will not renegotiate any parts of the jcpoa, and these are internal comments and have no value for Iran. Our response is the full and unconditional implementation of the jcpoa and compensation for the events of the past.”

Iran claims its ballistic missiles are for defensive purposes only, but these same missiles can be fitted with nuclear warheads and can reach not only Israel but Europe as well. Former Israel Defense Force intelligence chief Amos Yadlin said in a tweet that Israel must pressure a Biden administration to use the sanctions it will inherit from the Trump administration to force Iran to agree to enough changes in the jcpoa so that these holes regarding the ballistic missiles can be filled.

Outside of Israel and the United States (at least under the Trump administration), most of the rest of the world is allowing Iran to develop a nuclear bomb based on the idea that Iran will act rationally and only use such a weapon to defend itself. But Watch Jerusalem assistant managing editor Brent Nagtegaal wrote in “Iran’s Terrifying Drive Toward Delivering a Nuclear Weapon”:

Iran is not defensive, but offensive. It doesn’t need to be provoked to act. Iran initiates conflict all by itself.

And that’s precisely how the Bible describes the end-time nation of Iran.

For almost three decades, Watch Jerusalem editor in chief Gerald Flurry has shown that Iran fulfills the role of the prophesied “king of the south” spoken of in the book of Daniel. This is a king that leads a radical Islamic kingdom and initiates conflict, not just against Israel, but against Europe as well.

Iran has always been pushy with its foreign policy, and this new law is just another step closer to provoking conflict. For more information on how Iran is pushing the world toward war, read our editor in chief Gerald Flurry’s booklet The King of the South.