A massive trove of discoveries found during a survey of Judean Desert caves—including the first such biblical scroll discovered in 60 years.
By Christopher Eames • March 16 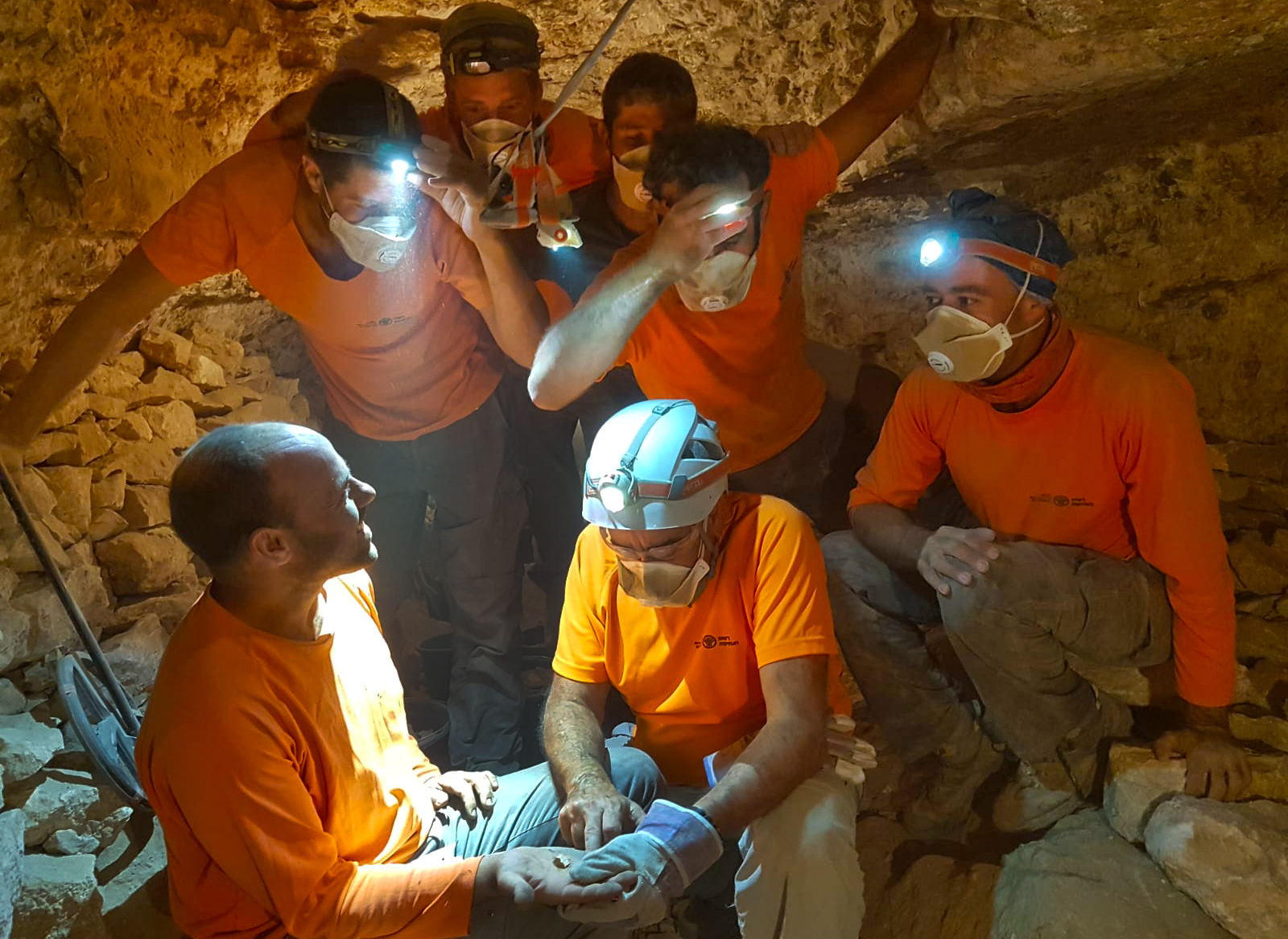 Captured: The moment one of the scrolls is discovered.
Highlight Films, courtesy Israel Antiquities Authority

Since the revolutionary discovery of the Dead Sea Scrolls in the 1940s and ’50s, archaeologists have been in a veritable race against time (or rather, antiquities robbers) to scour caves surrounding the Judean Desert for any remaining parchments.

In 2017, the Israel Antiquities Authority (iaa) led a special national initiative to survey and excavate the desert caves and ravines, and just yesterday, the first incredible results of that effort have been revealed. Within a cave located on the edge of a sheer cliff (ominously called the “Cave of Horror”), archaeologists uncovered a trove of discoveries, including some 80 fragments of a Bible scroll containing preserved verses from the books of Nahum and Zechariah.

Due to the sheer drops surrounding the cave, archaeologists had to rappel 80 meters down from the cliff top to the cave entrance, where excavations could take place. Remains found within the cave revealed that daring Jews had taken refuge there at the time of the failed Bar Kochba Revolt of the early second century c.e.

The scroll fragments discovered by the team were a Greek copy of the 12 Minor Prophets (this is the last part of the Prophets section of the Bible, from Hosea to Malachi—the shorter prophetic books). 11 lines of text were preserved on the fragments, which turned out to be from the books of Nahum and Zechariah. The iaa Dead Sea Scrolls unit examined the script, and determined that it was the product of two different scribes. The passages are as follows:

The Nahum passage is especially fitting given the location of the discoveries—as well as the frightening period in which the cave was used as a refuge. The texts were also notable in that, while they were written in Greek, the names of God were written in the original Hebrew language used during the First Temple period.

Besides the scroll fragments, the archaeologists discovered a series of other finds buried in the cave. One in particular was the mummified body of a child buried beneath two flat stones. Tucked into a fetal position, the child—aged somewhere between six and 12—had been wrapped with cloth around its head and body, and clutched in its hands another piece of cloth (buried as if it was merely sleeping). The mummy was carbon dated, giving a date of roughly 6,000 years old.

The dead body hearkens to how the Cave of Horror originally got its name: Officially catalogued as “Cave 8,” a series of surveys during the 1950s and ’60s revealed that the cave had been a hideout for some 40 individuals—men, women and children—during the Bar Kochba Revolt. The Romans, aware of the hideout, set up camp on the clifftop directly above, thus trapping the occupants inside. Rather than surrender, the Jewish refugees stayed put, apparently succumbing to thirst and dying within the cave. The nickname “Cave of Horror” was given following the discovery of the skeletons.

Another notable find for the current survey team (this from another cave) was the oldest known basket ever discovered, carbon dated to the Neolithic period. The large woven storage basket, of roughly 100-liter capacity, was beautifully preserved—as with the other discoveries—thanks to the dry, arid climate of the Dead Sea desert region.

Thus far, more than 80 kilometers of desert caves have been surveyed by the iaa. Other discoveries found include coins, a mat, jars, arrowheads, spearheads, a 2,000-year-old sandal, lice combs, fabric and date pits. Where possible, youths and members of pre-military programs have joined in the excavation efforts in more accessible areas, as part of an educational program to connect the younger Israeli generation with its heritage.

At the unveiling of the discoveries, Raz Frohlich, Director General of the Ministry of Sports and Culture, stated the following: “This is a historic discovery, on an international level at this time. Alongside progress and technology, we are reminded of the rich historical heritage of the Jewish people. The importance of this event took an additional turn … when dozens of youth took part in the excavations and were given the chance to meet with the Jewish ethos, which lives on from the days of the Bible, face to face.”

There remains some 25 percent more of the Judean Desert to survey by the team, with another 20 promising caves to be excavated. There are bound to be more exciting discoveries to come.

Iaa Director Israel Hasson summarized his team’s efforts: “The desert team showed exceptional courage, dedication and devotion to purpose, rappelling down to caves located between heaven and earth, digging and sifting through them, enduring thick and suffocating dust, and returning with gifts of immeasurable worth for mankind.”