A three-millennia-old offering to Zeus—and a link to the infamous deity of the Bible, Baal
By Christopher Eames • March 25 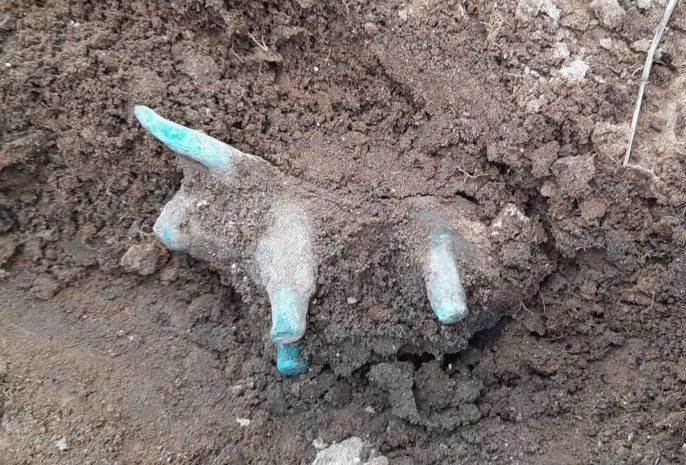 Rain can be a real pain to ongoing archaeological work—but it can also bring with it new discoveries. Such was the case with a new discovery released from Greece last week: Following a heavy downpour at the ancient site of Olympia, a sharp-eyed archaeologist discovered a blue-green horn sticking out of the ground—the tell-tale color of an ancient bronze artifact.

The item was excavated, cleaned and revealed to be a bronze bull statuette. Dating to somewhere within the Geometric Period (around 1000–700 b.c.e.), the burned artifact had evidently served as a “sacrificial offering” to the god Zeus, whose temple and grove it was discovered alongside. While such votive offerings of small statuettes are well-known to the Greek world (a large number have been discovered at this altar to Zeus), what is particularly unique about this artifact is that it is bronze—a more expensive commodity.

The bull was a valuable physical animal to Greece and was religiously symbolic—particularly in the worship of Zeus. It is one of the symbols of the god (the Myth of Europa, for example, relates Zeus’s transformation into a bull).

The Zeus-bull connection goes even further, however, to one of the most infamous deities in the Bible: Baal. That’s because Zeus is the Greek equivalent of the Canaanite-Phoenician god Baal (in the same way that the Roman Jupiter is the later equivalent of Zeus). The pantheons of the Mediterranean and Middle East are indelibly linked, derivative and easily traceable. In such manner, we see names including Zeus Belus (“Zeus Baal”) and Jupiter Belus. Zeus and Baal were respected in their various regions as “thunder god,” and were often depicted armed with a fiery “thunderbolt.”

Bull-worship and sacrifice related to Baal features throughout the Bible. Judges 6 describes Gideon destroying an altar and grove of Baal and capturing the bulls at the site. 1 Kings 12-13 describe the official establishment of pagan Israelite worship before calves (also note Exodus 32).

An especially famous episode is the showdown between the Prophet Elijah and the 450 priests of Baal to establish the identity of the true God: Both sides prepared a bull on an altar to see which sacrifice would be divinely ignited (1 Kings 18). “And they took the bullock which was given them, and they dressed it, and called on the name of Baal from morning even until noon, saying: ‘O Baal, answer us.’ … [And] Elijah mocked them, and said: ‘Cry aloud; for he is a god; either he is musing, or he is gone aside, or he is in a journey, or peradventure he sleepeth, and must be awaked’” (verses 26-27).

Again, the common symbol of Zeus-Baal is his fiery bolt of lightning: It is interesting that here in this biblical account, it is the God of Elijah who lights his sacrifice with a literal bolt of fire from heaven—not Baal for his priests (verse 38). The symbolism would surely not have been lost on the Baal-worshiping audience gathered to witness the event.

It was during this same Israelite Iron II/Geometric period that a worshiper at Olympia presented his or her own “bull offering” (a rather more metallic one) to the god of thunder.

Discoveries such as the Olympia bronze bull highlight how even the most miniature of finds speak volumes of the ancient world—a devout belief, a ritual, a sacrifice frozen in time—and help bring to life the stories of the Bible.