Will the pope’s visit to Lebanon be enough to unite this small, fractured nation?
By Watch Jerusalem Staff • April 28 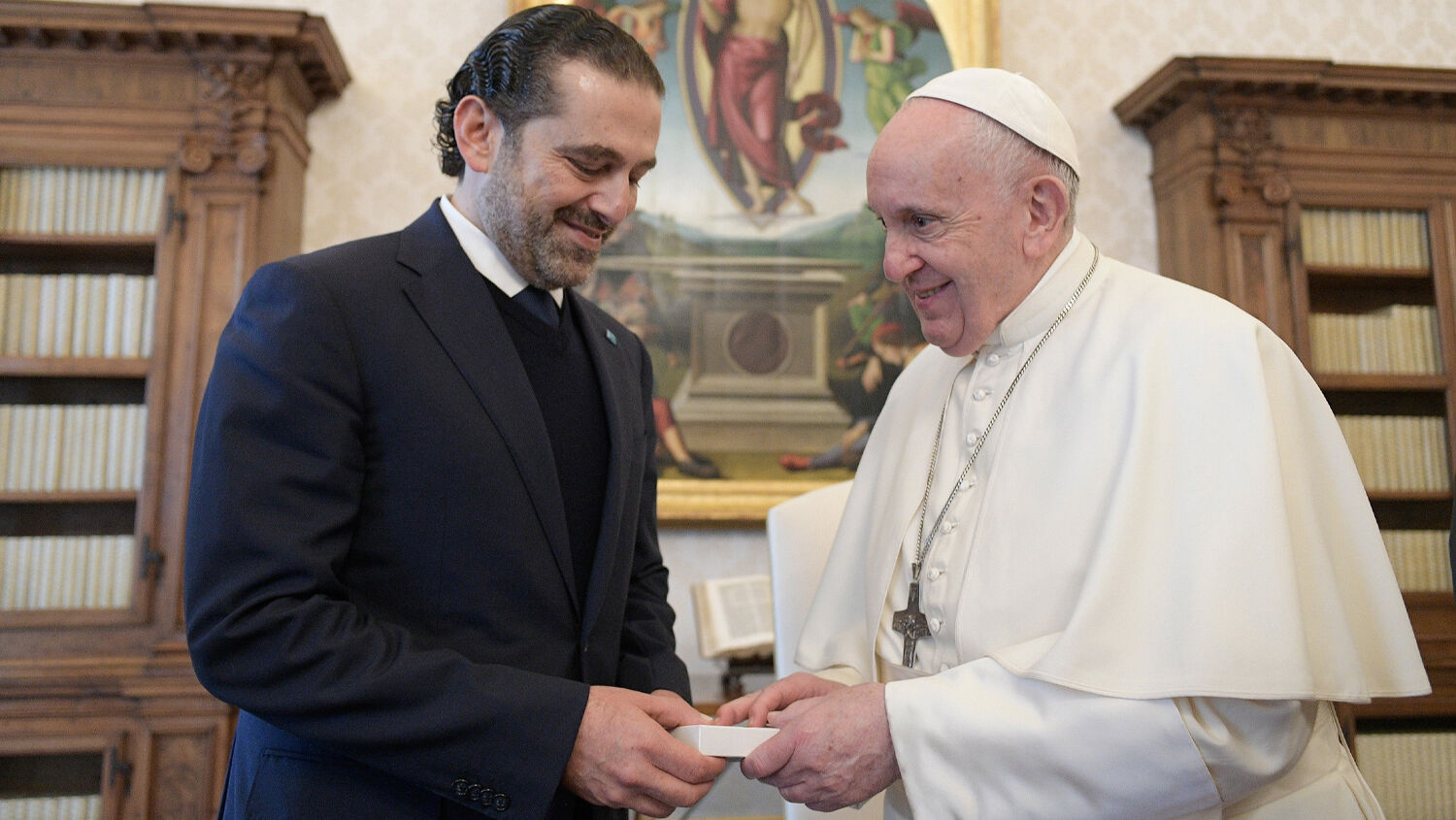 Pope Francis met with Lebanese Prime Minister-designate Saad Hariri to discuss the political situation in Lebanon on April 22. The pope urged all Lebanese political leaders to “urgently commit themselves to the benefit of the nation,” especially as the nation has been locked in a stalemate over the formation of a new government since October 2020.

After the meeting, Hariri said that Pope Francis “was aware of the current problems in Lebanon and was understanding and encouraging that we can form a government. He also expressed his keenness to visit Lebanon, but only after the government is formed. This is a message to the Lebanese that we must form a government so that all powers and countries come together to help us.”

Hariri has been working since his designation last October to form a government of nonpartisan specialists, but as a result of disagreements between him and President Michel Aoun—a Maronite Christian—his work has been largely to no avail. “The Vatican knows very well who is and who is not obstructing the government formation process,” said Hariri.

Hariri presented Aoun with his proposed government back in December; his aim with the list was to pick members who are not affiliated with Hezbollah in order to break Hezbollah’s hold on the government. However Aoun, who is in alliance with Hezbollah, refused and instead put forward his own list of names for the cabinet. Hariri told Aoun that he continues to stick with the original list he presented more than 100 days ago. He told the media that “it is not the duty of the president to form a government.”

Hezbollah has had a death grip on Lebanon’s government for many years, but now we are beginning to see signs of it slipping. Lebanon has the largest percentage of Christians in the Middle East and it is the only Arab country with a Christian as the head of state. Europe has a history with Lebanon. And now the Vatican is taking note of the situation too.

Will the pope’s visit to Lebanon be enough to unite this small, fractured nation?

Hariri’s visit with Pope Francis comes as Lebanon is in its worst economic and financial crisis, a result of decades of corruption in the top positions of the Lebanese government. For nearly 18 months, Lebanon has been hit by one crisis after another, compounded by covid-19 and the explosion at the Port of Beirut on Aug. 4, 2020. Since late 2019, Lebanon has been locked in a serious crisis, with the Lebanese pound having lost almost 90 percent of its value.

During the 30-minute meeting on April 22, the pope stressed his solidarity with the Lebanese people who are “living in great difficulty and uncertainty.”

According to Vatican spokesman Matteo Bruni, the pope hopes that “with the help of the international community, Lebanon will be able to once again be the land of gathering, coexistence and pluralism.”

The pope isn’t the only one looking for international help for Lebanon. Hariri himself has been seeking help from other nations too—specifically those in Europe.

He recently toured the Middle East and Europe, seeking to win support for his efforts to form a government. Among the countries he visited were France, Turkey, Egypt and the United Arab Emirates. Hariri also met with Italian officials after his meeting with the pope on April 22.

Hariri asked the Vatican “to be concerned about Lebanon and to intervene where they can be effective because this is what concerns Lebanon and the Lebanese. We are in a very bad situation, but once we form a government, we can stop the collapse.”

A few outside countries have discussed helping Lebanon, but many are afraid that any money given to help the Lebanese people will fall into the hands of the same corrupt politicians who wrecked the nation’s finances in the first place.

Shortly after the Beirut port explosion, French President Emmanuel Macron visited the country. To many, his visit was a watershed moment, a helping hand for a drowning man. And it illustrated that the Lebanese trust a foreign president more than their own politicians, whether Sunni, Shiite, Druze or Christian.

One young Beirut resident told the New York Times that “we’re asking for the president of France to take over Lebanon. Just throw away the government. There’s no future here for us if the current politicians stay. We’d rather get colonized than die here.”

Those are strong words.

Commenting on the situation in Lebanon, Maximilian Felsh, a professor at Beirut’s Haiganzian University, said, “In a situation like this, it’s perfectly understandable that people hope to get rid of their political leadership. Anything is better than this. So I can understand that the majority of the Lebanese people hope that, if it was possible, some foreign power will take control of the country.”

Since the Beirut explosion, Lebanon has been calling out for foreign aid.

And now the pope is also eyeing Lebanon.

Your Bible specifically prophesies such a change of government will take place soon in Lebanon.

For the past decade, Watch Jerusalem editor in chief Gerald Flurry has forecast that Lebanon will switch alliances from Iran to European and moderate Arab nations. This forecast is based on a prophecy found in Psalm 83; this psalm describes an alliance of nations that unite to fight against Israel. “They have said, Come, and let us cut them off from being a nation; that the name of Israel may be no more in remembrance. For they have consulted together with one consent: they are confederate against thee” (Psalm 83:4-5).

No such alliance has occurred in history, which is further proof that this is prophecy for the times just ahead.

Based on this prophecy, we can know that Lebanon will be allied with a German-led Europe.

In his article “The Beirut Blast: Catalyst for Biblical Prophecy,” Watch Jerusalem Jerusalem correspondent Brent Nagtegaal wrote, “While Europe has failed to act forcefully in the past, it appears that soon there will be European forces on the ground in Beirut directing money and aid, directly bypassing Lebanon’s Hezbollah-led government.”

That is exactly what Hariri, and now the pope too are calling for. And Europe helping to rid Lebanon of Iran’s death grip on the government is setting the stage for the fulfillment of these biblical prophecies.

The situation in Lebanon is starting to gain more attention from Europe, and as your Bible says, soon Europe will take action. Continue to watch Lebanon. Events in this small nation will soon reverberate across the Middle East and the whole world.

For more information about Lebanon and the crisis it is facing, please read “Why We Told You to Watch Lebanon” and “The Beirut Blast: Catalyst for Biblical Prophecy.”