What Does Haaretz Have Against Israel?

Have you seen the headlines?
By Christopher Eames • May 19 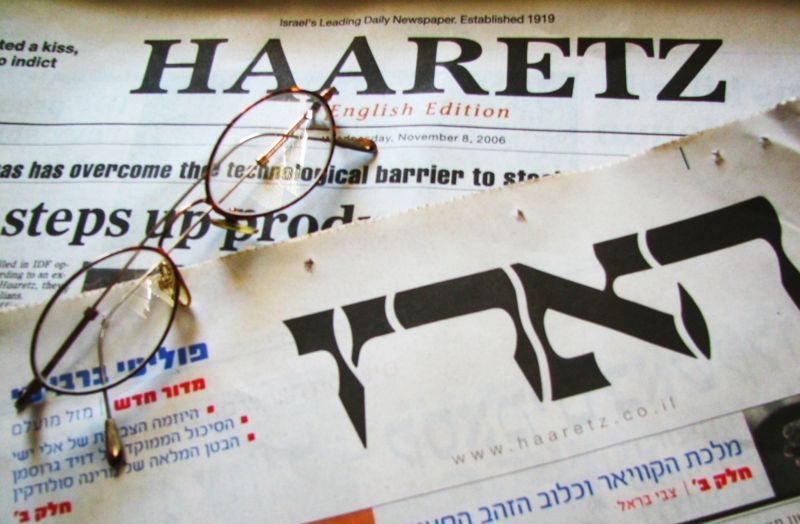 It’s no secret that the Tel Aviv- and New York-based newspaper and website Haaretz is left-leaning. This longest-running newspaper in Israel has made a name for itself as liberal, left-wing journalism. Haaretz describes itself as an “independent daily newspaper with a broadly liberal outlook both on domestic issues and on international affairs.” The Center for Research Journalism describes it as Israel’s “most influential and respected [daily] for both its news coverage and its commentary.”

In times of national turmoil, such as today in Israel, a nation’s media plays a significant role in how the world sees and interprets the situation on the ground, as well as affecting the mood of the national population and armed forces. With this in mind, Haaretz’s journalism can either be actively strengthening Israel—or weakening it.

The following are all headlines solely from Haaretz’s English-language website home page, as of Wednesday morning. See what you think:

And, ironically, the following:

Demoralization? You don’t say. But should you tire of reading about the Israeli-Palestinian conflict, you could turn to the following title and subhead (likewise featured on the home page; emphasis added):

Not even a hint toward a Holocaust? It’s certainly an inflammatory statement—one for which there is significant disagreement.

These kinds of individual articles are par for the course for Haaretz; still, the sheer quantity (and during a national time of war), took me by surprise. What does Haaretz have against Israel?

Some years ago, while living in Jerusalem, I queried what Israelis think of Haaretz given this type of highly biased, anti-Israel coverage. One of my friends informed me that the Hebrew version of the website and magazine is apparently not as extreme as the English one (putting aside such famously provocative writers as Gideon Levy). If that is indeed the case, I wonder how many Israelis, who frequent the Hebrew website, are aware of this type of journalism being disseminated to the wider world on their behalf? I struggle to believe that a bulk of the Israeli public enjoy a steady stream of self-abasement and disdain.

As primarily an archaeology contributor for Watch Jerusalem, I keep abreast of and cover archaeology-related articles—new discoveries and archaeology reporting. And the very same theme can be found here. Haaretz archaeology articles, when covering discoveries related to the Bible, are typically written with a view to undermine or disprove the biblical account or Israel’s significance in the ancient world. Minimalist and provocative scholars, such as Prof. Israel Finkelstein, can almost be counted on to be selectively featured in such articles. (For more on this subject, take a look at our article “Haaretz’s Hit Job On the Bible.”) It’s no coincidence that an embarrassment of the Bible features with an embarrassment of the nation.

Again, what is Haaretz’s problem with Israel? It is undoubtedly serving to weaken Israel from within. The same type of media forces are unabashedly at work in the United Kingdom and the United States of America—actively promoting revisionist history, loudly condemning national flaws and founding, encouraging race riots and race reparations, tearing down statues, blotting out historically significant leaders. Winston Churchill is now popularly characterized as an “evil” figure, even being compared to Adolf Hitler; Abraham Lincoln, a racist and a supporter of slavery.

One of the more recent, famous episodes was the New York Times-driven “1619 Project,” aimed at anchoring America’s founding to the slave trade rather than 1776—with the Founding Fathers, the drafting of the American Constitution and the Revolutionary War. (Is it any surprise that Haaretz is published and sold in conjunction with the New York Times?)

What is behind this clearly biased, left-wing media spirit of national self-hatred, appeasement of enemies and veritable betrayal? It’s not a new phenomenon (although today, it is more widespread and prevalent). The same was true just prior to World War ii, with the bbc famously effusive toward Hitler and UK Prime Minister Neville Chamberlain’s attempts to appease him, and famously unsupportive and critical of Churchill. How does the media get it so wrong?

What is Haaretz’s problem with Israel? The bbc’s problem with (once-Great) Britain? cnn’s, msnbc’s and the New York Times’ problem with the United States? Are these nations the worst blight on human history? You’d almost be forgiven for thinking so, despite living through a century of history’s three-greatest mass-murderers—Mao, Hitler and Stalin—and two world wars. But where is the gratuitous stream of German, Chinese, Russian, Japanese self-flagellation? These remain proud nationalistic countries.

What is the answer? It happens to be found in, and indelibly tied to, that Book often actively undermined by Haaretz—a book that is today widely rejected and criticized in the media and education today: the Bible.

The Times is fomenting racial hatred that will end in death and suffering and the burning of America’s cities. Abraham Lincoln was right when he quoted the Bible in saying: “A house divided against itself cannot stand.” …

These journalists and politicians are hastening the fulfillment of the terrifying prophecy of Isaiah 1: “Your country is desolate, your cities are burned with fire: your land, strangers [Gentiles] devour it in your presence, and it is desolate, as overthrown by strangers” (verse 7).

There is a biblical reason for why specifically America and Britain (alongside Israel) are enduring this kind of media coverage and assault on their history. For a full explanation, request the free booklet by our editor in chief Gerald Flurry, America Under Attack.

Israel’s presence in the land is inseparably connected to the Bible. Thus, as the Book goes, so too go the “People of the Book”—the Jews.

Modern-day Judah is in a war—a war within its borders, a war with Hamas, but also a war for truth, accurate reporting and the perspective of the wider world. The fighting spirit of frontline Jews is indelibly affected and harmed by such media narratives as the above, from Haaretz. The Bible speaks to this damaged spirit.

Genesis 49, in the very first book of the Bible, is labeled from the outset as an “end of days” prophecy for Israel (verse 1). It describes Judah, the Jews, as a lionlike people (verse 9). But it describes them in this end-time context as a lion being worn down. “Judah is a lion’s whelp: from the prey, my son, thou art gone up: he stooped down, he couched as a lion, and as an old lion; who shall rouse him up?” (verse 9; King James Version).

In fraught times like these, Israel needs stirring and encouragement, direction and a firmly anchored sense of national pride, unity and identity. It needs purpose and proper encouragement. The Bible provides that, and has indeed been the bedrock text for the Jews for millennia. On a different level, the media should do that too. That is the aim of our magazine.

Who shall “rouse Israel up”? Not Haaretz, that’s for sure.