Spain Sends in the Troops Against North African Migrants

Europe is getting fed up with its migrant problem. Where will this lead?
By Mihailo S. Zekic • May 24 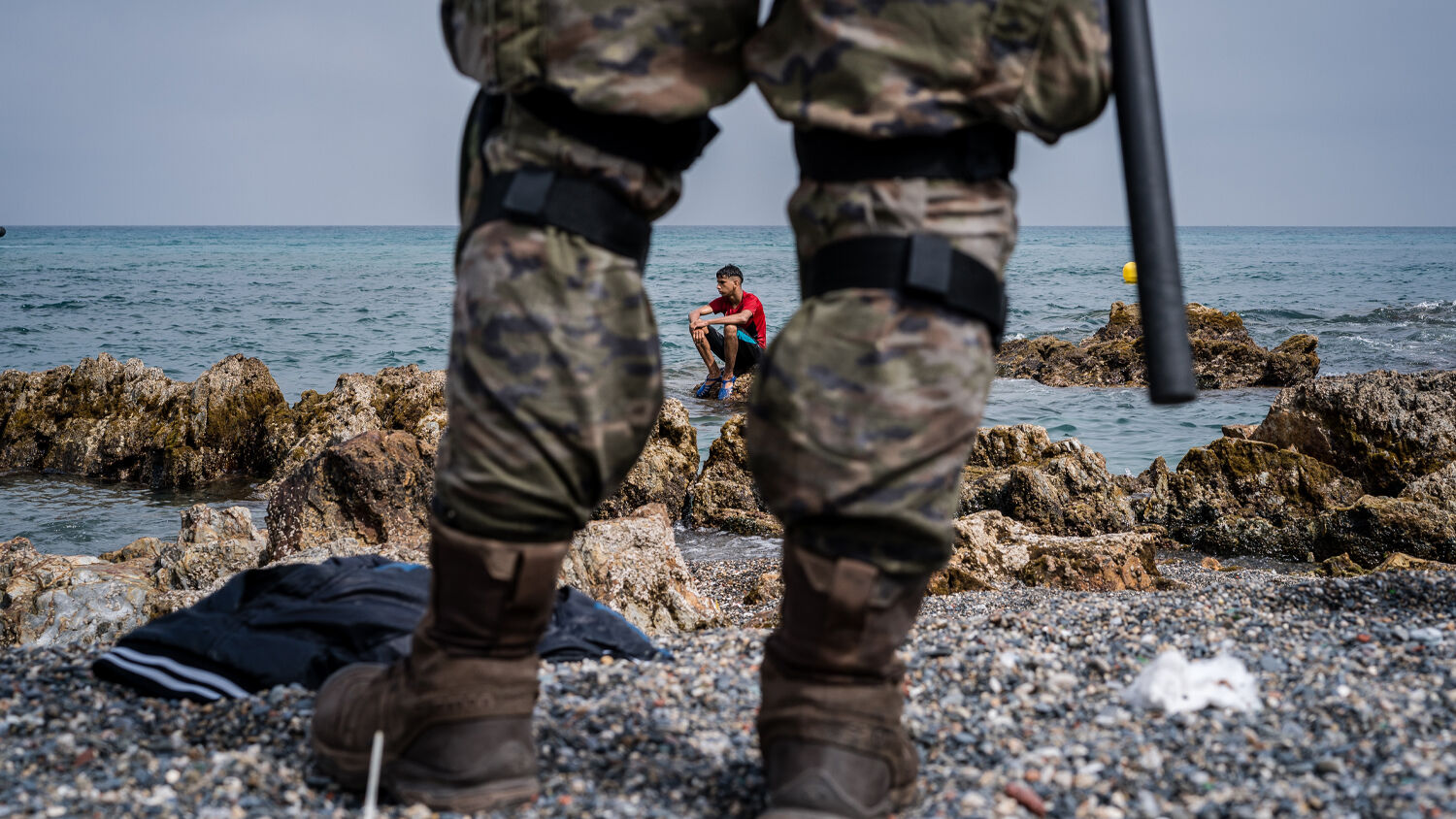 A young migrant who has just swam to Ceuta is watched by soldiers of the Spanish army, on May 19, 2021.
DIEGO RADAMES/ANADOLU AGENCY/GETTY IMAGES

Over 8,000 illegal migrants from North Africa arrived in Ceuta between May 17 and 18. Ceuta is a small Spanish territory in North Africa, bordering Morocco. The group includes about 2,000 minors. Spain had already sent several thousand migrants back across the border to Morocco. To combat the migrant surge—one of the largest in the area in years—Madrid called in the military. Spanish soldiers in armored personnel carriers landed to stop migration. Soldiers—along with reinforcements from the Spanish police—will now patrol the border.

Many of the refugees swam from Morocco into Ceuta. But many others were let in by Moroccan authorities on the other side of the border. Spain and Morocco are currently having a spat over the hospitalization of Brahim Ghali, the leader of the Polisario Front. The Polisario Front is the rebel group fighting for Western Saharan independence. Western Sahara is a region administered by Morocco but not widely recognized internationally. Many suspect Morocco helped the migrants as revenge for Ghali’s hospitalization. “This is happening because of the absolute passivity of the Moroccan authorities,” said Ceuta regional leader Juan Jesús Vivas.

As evidenced by the troop deployment, Madrid is taking this very seriously. “We are going to restore order to the city and its borders,” said Spanish Prime Minister Pedro Sánchez in a televised address. “We’ll be firm to guarantee your safety in face of any challenge.”

Despite Morocco’s territorial claim on Ceuta, Spanish Interior Minister Fernando Grande-Marlaska said Ceuta “is as much Spain as Madrid, Seville or Barcelona.”

The European Union has also expressed concern about Spain’s migration crisis. “The most important thing now is that Morocco continues to commit to prevent irregular departures, and that those that do not have the right to stay are orderly and effectively returned,” said Ylva Johansson, EU Home Affairs Commissioner. “Spanish borders are European borders.” Ceuta has long been a popular way for migrants to get into Europe.

This latest crisis comes after 20,000 migrants tried to enter the Canary Islands last year. Many of the migrants came from Morocco and even as far away as Senegal.

But it’s not only Spain that is struggling. Europe as a whole has been dealing with illegal Muslim immigration and even terrorism. Last month, a Tunisian man, who entered Europe illegally, committed a terrorist act in suburban Paris. In March, Denmark became the first European country to revoke the residency permits of Syrian refugees. In the recent Dutch parliamentary elections, the far-right, anti-Islam parties had their best results ever.

Modern Europe prides itself in its forward-thinking progressiveness. Policies like multiculturalism used to be something that Europeans took pride in.

But on the shores of Ceuta—and in the rest of Europe—the tide is turning.

“There are cities and suburbs in France, Germany, Britain and other European countries that look, sound and smell more like Riyadh or Damascus,” wrote theTrumpet.com managing editor Brad Macdonald in April 2015. “Islamic communities are expanding across Europe that are choosing not to integrate, and instead are establishing Muslim culture in their host nations. “In some cities, minarets are as common as steeples. In some communities, the law is sharia. More than a few cities in Western Europe have ‘no-go’ neighborhoods that are simply too dangerous for native Europeans to venture into.”

This wasn’t what Europeans had in mind when they decided to embrace multiculturalism.

And with each provocative push from the Muslim world—whether it be a terrorist attack in Paris, or Morocco encouraging illegal immigration to Spain—Europe gets more and more fed up with its “Muslim problem.”

Where will this lead?

The Bible provides the answer in the book of Daniel. “And at the time of the end shall the king of the south push at him: and the king of the north shall come against him like a whirlwind, with chariots, and with horsemen, and with many ships; and he shall enter into the countries, and shall overflow and pass over. He shall enter also into the glorious land, and many countries shall be overthrown …. He shall stretch forth his hand also upon the countries: and the land of Egypt shall not escape. But he shall have power over the treasures of gold and of silver, and over all the precious things of Egypt: and the Libyans and the Ethiopians shall be at his steps” (Daniel 11:40-43).

As Watch Jerusalem editor in chief Gerald Flurry explains in his free booklet The King of the South, this is referring to a clash between two power blocs. The “king of the south” is radical Islam. The bloc will be led by Iran, the biggest state sponsor of terrorism worldwide. But it will also include many African countries like Egypt, Libya and Ethiopia. The “king of the north” is a united European power.

The king of the south specifically “pushes” at the king of the north. In other words, radical Islam stirs Europe to anger through provocative measures.

The masses of North African refugees trying to push their way into Spain is reflective of this. And Spain sees it as big enough of a threat to involve the army.

To learn more, request your free copy of The King of the South. Please also read “Je Suis Charles the Hammer,” to learn about Europe’s growing angst with its Muslim populations.