A Tale of Two Flags 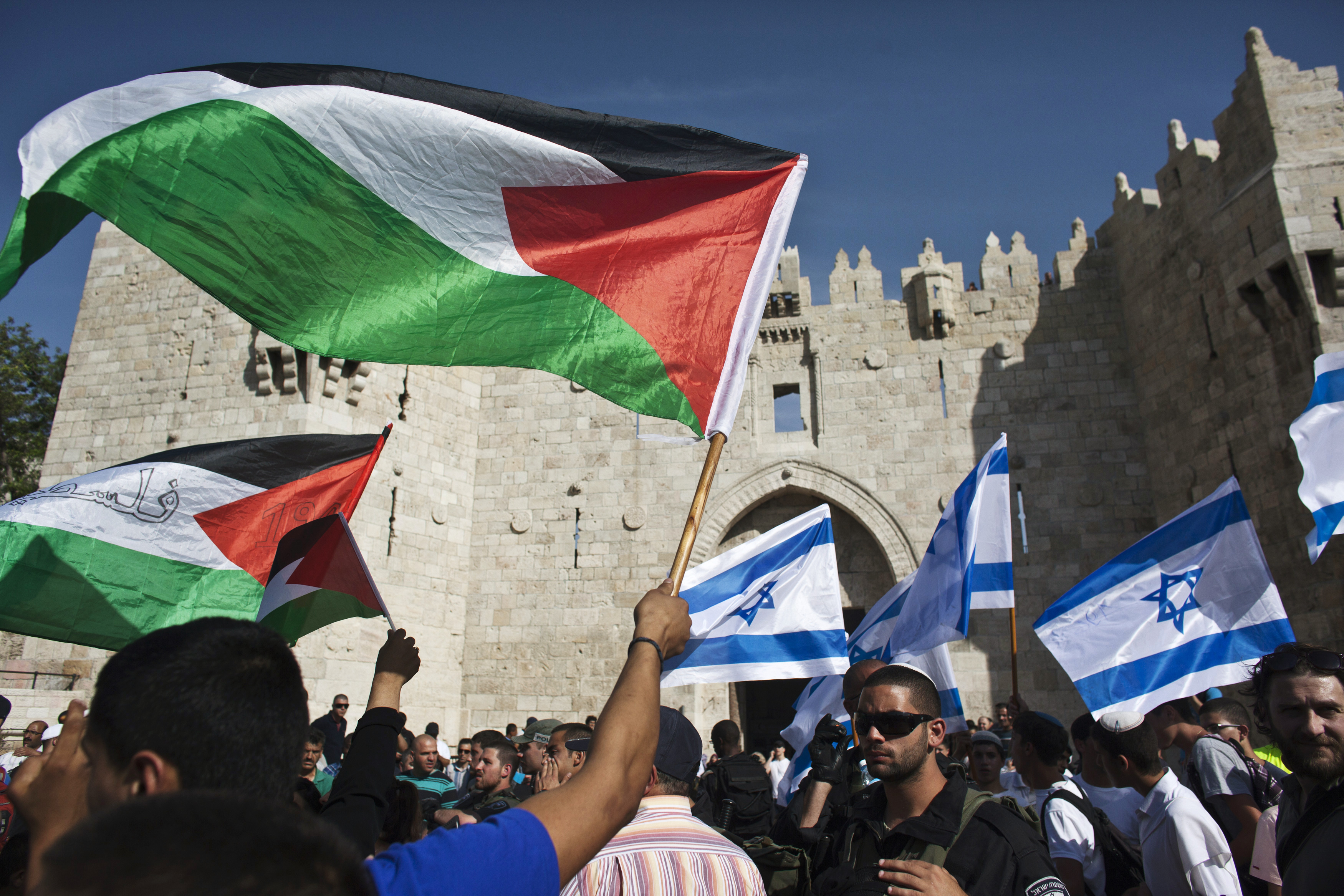 Israeli and Palestinian flags are waved at the 2019 demonstrations of “World Week for Peace in Israel and Palestine.”
Jerusalem Online

Flags are the most ubiquitous symbols of nations and peoples. And when it comes to the Israeli-Palestinian conflict, they are marched out in full force. During the latest round of fighting, Israeli and Palestinian flags have been brandished with inflamed passions in major cities around the world.

Everyone knows who they represent. But how many know what these literal symbols actually symbolize?

Any flag can be interpreted as a symbol of “oppression” or a symbol of “freedom” based on nationality. But what were these flags designed to symbolize?

Here’s a brief history and comparison of the modern Israeli and Palestinian flags. As it turns out, the symbolism is rather fitting.

It might come as a surprise, but the Palestinian flag is a relatively recent creation. It was first adopted on May 28, 1964, by the Palestine Liberation Organization (plo), officially formed on the same day with the goal of the “liberation of Palestine” through armed struggle. In 1988 (a year after the plo was declared a terrorist organization by the United States), leader Yasser Arafat declared a new “State of Palestine” and adopted this as the state flag.

The theme of the flag is almost identical to that of Jordan and other Arab nations, which use variations of the “Pan-Arab colors.” The origin of these flags are also relatively recent and surprising: The original design is attributed to British diplomat Sir Mark Sykes in 1916 (Sykes was a strong supporter of Zionism and a key player in the Balfour Declaration, aimed at establishing a “national home for the Jewish people” in the Holy Land). The flag was designed as a way of unifying the Arab world at the time in overthrowing the Ottoman Empire, which was then at war with Britain and its allies and had controlled much of the Middle East (including Palestine) for centuries. Known as the “flag of the Arab Revolt,” it was designed to fuel a nationalist uprising, and it became especially associated with Jordanian, Hashemite rule.

The Pan-Arab colors are also suggested to be a nod to the 13th-century Arab poet Safi al-Din al-Hili, who wrote: “White are our deeds, black are our battles, green are our fields, red are our swords.”

Specifically, the colors were chosen to variously highlight different Arab dynasties through history: white for the Umayyad dynasty (c.e. 661–750); black for the Abbasid (c.e. 750–1517, off and on); green for the Fatimid (c.e. 909–1171); red for the Hashemite (c.e. 1916–present). Within this dynastic delineation, the colors have their own symbolic meaning: Black is the color of revenge, from pre-Islamic time, and the Abbasid color of mourning; white was used by the Abbasid-opposed Umayyads as their symbol of mourning, and also symbolized the Prophet Mohammed’s first battle of Badr; the Fatimid green symbolized allegiance to the prophet’s cousin Ali, who famously wrapped himself in green to prevent an assassination attempt; the red symbolizes the bloody struggle for freedom.

The current Israeli flag has flown in the Holy Land for more than twice as long as the Palestinian flag. It was first designed in 1885 and flown that same year over the Jewish community in Rishon leZion (south of Tel Aviv). The flag was formally adopted in 1897 by the First Zionist Congress. When the State of Israel was formed in 1948 by a United Nations resolution, it immediately became the national flag.

The blue-and-white flag was designed to reflect the traditional blue-bordered, white Jewish prayer shawl (below). At a group meeting in Basel, Switzerland in 1897, Zionist David Wolffsohn wrote: “What flag would we hang? … We have a flag—and it is blue and white. The talith with which we wrap ourselves when we pray: That is our symbol. Let us take this talith from its bag and unroll it before the eyes of Israel and the eyes of all nations. So I ordered a blue and white flag with the Shield of David painted upon it.”

The symbol in the middle is the famous Star of David, which in Hebrew is actually known by an entirely different name: the Shield of David. There are several different theories about the origin of this symbol (as the use of a simple twin-triangle symbol can be found in other ancient cultures). It can be found in Jewish contexts at least as far back as the third century c.e. The shape was used by Jewish Kabbalist mystics in the Middle Ages, including as a protective amulet, and the shape is related to the arrangement of the Passover Seder. The six points and six sides are sometimes interpreted as a nod to the 12 tribes of Israel. The title “Shield of David” is linked to God’s name as such in several Bible verses.

There is a common misconception that the two blue bands of the flag represent an Israeli desire to spread an empire between the Nile and Euphrates rivers, based on a couple of verses about the biblical borders of Israel (Genesis 15:18; 1 Kings 8:65). This flag-theory was promoted in the Arab world, most notably by Yasser Arafat and Hamas, but has been broadly dismissed (even in Arab journalism). Wolffsohn’s original flag declaration refutes this, and Israel’s actions of repeatedly relinquishing such territory (such as the Sinai Peninsula and the Gaza Strip), and its failure to launch offensive land wars, attest to this.

Two very different flags, for two very different movements. One, the younger, unabashedly tied to revolt, warfare, revenge, mourning and the sword. The other symbolically tied to God, prayer and the shield. The flags representative of each side fit well alongside the below picture that became famous during the recent round of fighting between Israel and Hamas. (Can you tell which flag is representative of which?) It is perhaps also no coincidence that the general nature of protests and support by each group around the world often fits with the flag—one side often calling for violence, war, rape and extermination from the region (along with the assault of pedestrians and damaging of property); the other calling for unity and the right to remain in the land of their ancestors.

It is a struggle highlighted in the earliest pages of the Bible, nearly 4,000 years ago—a clash of related Abrahamic peoples. One side that lives by the sword; the other, covenanted to God (Genesis 17:20-21).

One can never find peace living by the sword; conversely, one can never truly win from a defensive position.

As such, can there ever be peace between these nations in the Middle East? Is there a solution? There has never been any real progress with the much-talked-about “Two-State Solution” (and the Jews know all too well about the dangers of final “solutions” imposed by other nations)—only more violence. The withdrawal from Gaza has demonstrated that only too well.

Did you know that the Israeli-Palestinian conflict, including the embittered “peace process,” was prophesied in the Bible? It not only prophesied about the conflict, but it reveals the only solution—and what the end result will be. To learn more, request your free copy of Gerald Flurry’s booklet Jerusalem in Prophecy.