The Enheduanna Disk: An Early ‘Tower of Babel’ Depiction?

A 4,300-year-old artifact with a rather familiar picture
By Christopher Eames • July 7 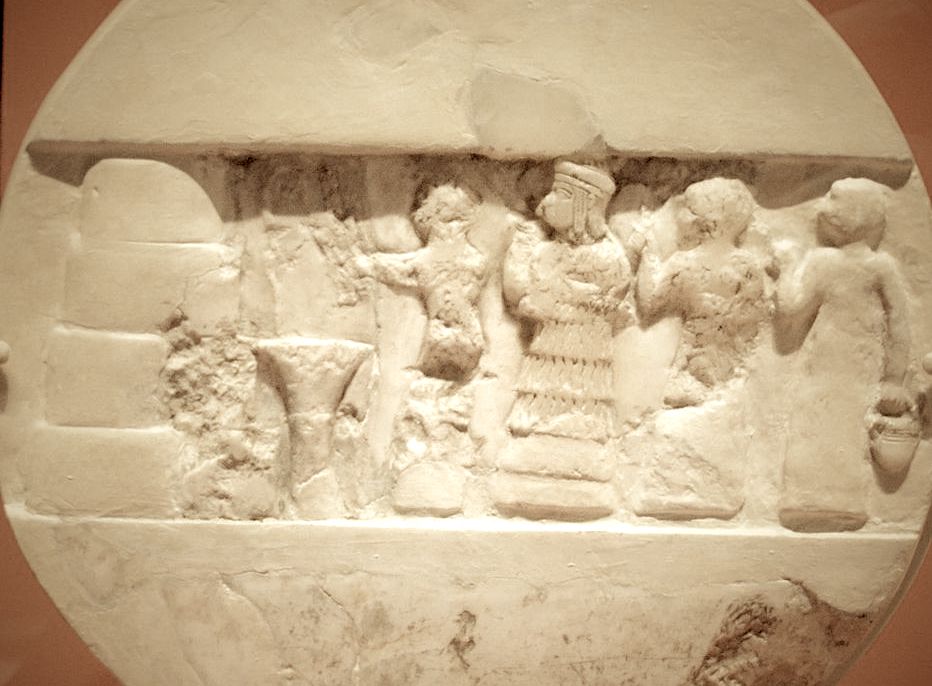 You’re probably familiar with the famous renaissance art depictions of the tower of Babel, classically depicting a precipitously tall building made up of several levels, spiraled or stacked like a wedding cake. Thanks to archaeological work throughout Mesopotamia over the last two centuries, we now know that the tower of Babel was almost certainly a ziggurat, by far the most imposing early religious buildings found throughout Mesopotamia; tall, yes, but oftentimes remarkably wide and blockish. They give us a fascinating illustration of what the tower of Babel looked like.

And so does another peculiar, much smaller discovery.

In 1927, a large alabaster disk (or rather, large, broken chunks of it) was unearthed during Sir Charles Leonard Woolley’s excavations at Ur. On the face of the disk was a depiction of a tall, stepped structure, one strikingly resemblant of more modern art depictions of the tower of Babel. Could this be a contemporary example of what the infamous tower looked like?

Known as the “Enheduanna Disk,” the artifact is dated to between 2350 b.c.e. and 2200 b.c.e. The princess for whom it is named after, Enheduanna, served within this period as priestess to the moon-god Nanna. She is also known as the world’s earliest-named author, with numerous inscriptions attributed to her.

Though the disk was fragmentary, it was reconstructed (in the image below, the smoother parts of the artifact make up the reconstructed sections). The artifact somewhat resembles a cheese wheel in style and size—around 25 centimeters in diameter and 7 centimeters thick. The obverse side depicts four individuals (with Enheduanna second from left) in religious procession, approaching an altar. Behind the altar is a stepped structure; this is believed to represent (albeit not to scale) a tall ziggurat temple of Inanna behind its altar.

This structure is also indicated by an inscription on the reverse side of the disk, which reads: “Enheduanna, zirru-priestess, wife of the god Nanna, daughter of Sargon, king of the world, in the temple of the goddess Inanna.” Inanna was a chief Sumerian deity, later worshiped as the Ishtar of Babylon; the Astarte of biblical Canaan, Phoenicia and Israel; the Aphrodite of Greece; and the Venus of Rome—collectively known by the epithet “Queen of Heaven.”

Of course, the famous tower of the Bible was built at Babel, not at Ur (although the two city sites are relatively close). Still, the Enheduanna Disk is dated to roughly the same period as the tower of Babel, according to Bible chronology, and thus serves as a good representation of the type of towering religious construction going on in southeastern Mesopotamia at the time. And it fits well with other artwork (such as Nebuchadnezzar’s own later reconstruction of an original tower in Babylon—see left), along with the remains of various actual ziggurats themselves.

These all aptly illustrate the Bible description of southeastern Mesopotamia in the late third millennium b.c.e. as described in Genesis 11: “And they said one to another: ‘Come, let us make brick, and burn them thoroughly.’ And they had brick for stone, and slime had they for mortar. And they said: ‘Come, let us build us a city, and a tower, with its top in heaven …” (verses 3-4).

Based on the stylistic depiction of the Enheduanna Disk, perhaps those renaissance paintings weren’t far off the mark after all.