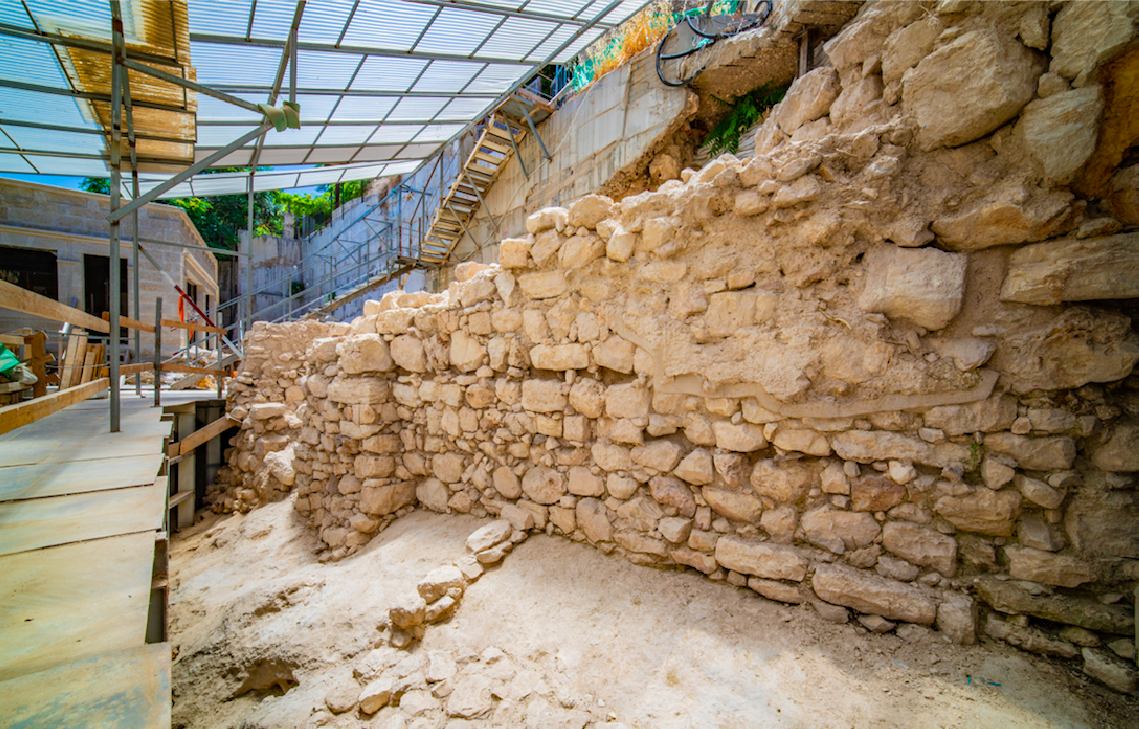 The exposed section of the wall
Koby Harati | City of David

Archaeologists working on the eastern slopes of the City of David have uncovered a significant stretch of Jerusalem’s First Temple period fortification wall, that stood at the time of the Babylonian invasion in the 6th century b.c.e. The imposing Kidron Valley wall was revealed to a length of roughly 40 meters, a preserved height of up to 3 meters, and a width of 5 meters.

This length of wall “fills the gap” between two separate sections of the same eastern fortification line that had already been excavated decades prior: A northern length discovered in the 1960s by Dame Kathleen Kenyon, and a southern section uncovered a decade later by Prof. Yigal Shiloh. The new discovery allows the impressive tracing of nearly 200 meters of fortification wall along the eastern side of the City of David.

Near the wall, the archaeologists—directed by Dr. Filip Vukosavović (Ancient Jerusalem Research Center), Dr. Joe Uziel and Ortal Chalaf (Israel Antiquities Authority)—discovered a number of significant small finds, such as administrative stamps including lmlk, rosette and circle-stamped vessel handles. Notably, a small stone Babylonian seal was found, depicting the symbols of the Babylonian gods Marduk and Nabu (named in the Bible as Merodach and Nebo), as well as a small Hebrew bulla. The bulla was damaged, but at least one personal name can be made out on it: “Zaphan/Tsafan.” (This is the same name-element, for example, for the prophet Zephaniah—and a “Zephaniah the priest” is also mentioned in the context of the Babylonian destruction of Jerusalem—2 Kings 25:18.)

Though the Babylonians had been ultimately successful in breaking through and conquering Jerusalem c. 586 b.c.e., this extremely thick southeastern fortification wall was not totally destroyed. This is perhaps partly due to the difficulty of breaching Jerusalem at this point in this steep eastern part of the city, the Kidron Valley, which slopes at an angle of over 30 degrees. (Recall the Jebusites taunting King David that even the “blind and the lame” could stop him from breaching the city; 2 Samuel 5:6-8.) Jerusalem’s strong fortifications, and especially its natural geographic defenses, allowed the Kingdom of Judah to resist the might of the Babylonian Empire for as long as it did—about one and a half years, before finally “a breach was made in the city” (2 Kings 25:1-4)—probably further north/west in the expanded, more level parts of the capital.

The Excavation⛏️ has exposed the missing section of the ancient city wall of Jerusalem that the Babylonians encountered on the eve of its destruction on Tisha B’Av, in 586 BCE. pic.twitter.com/hcwyKlJ76m

The archaeologists are yet to secure a definite date for the construction of the defensive wall, but state that it was probably constructed around the late eighth/early seventh century b.c.e. This would fit well with the biblical account, which describes much of the wall of Jerusalem broken down during an invasion from the northern Kingdom of Israel c. 800 b.c.e. (2 Kings 14:13), followed by a late eighth-century re-fortification of “the wall that was broken down” by King Hezekiah, in preparation of the oncoming Assyrian siege (2 Chronicles 32:5). Later, during the early seventh century, Hezekiah’s son Manasseh is described building a wall deep in the Kidron Valley in this very area (33:14).

This newly-discovered southeastern fortification line remained standing, then, following the Babylonian destruction. This has already been highlighted in the media as a “potential contradiction to the biblical account,” something that “puts in question [the] narrative of 2 Kings,” citing 2 Kings 25:10: “The entire Chaldean [Babylonian] force that was with the chief of the guard tore down the walls of Jerusalem on every side” (Jewish Publication Society Tanakh). The wall-discovery is hardly contradictory, however: The Hebrew text doesn’t state that every single wall was torn down all the way to bedrock (and scriptures indicate there were several such fortification lines around Jerusalem). The single Hebrew word translated as “every side” means “around” or “round about.” The passage in 2 Kings 25 could equally be translated “tore down walls around Jerusalem.” And as archaeological excavations in Jerusalem have revealed, this “tearing down” is especially apparent on the western side of the city.

Further, this present discovered section of wall is preserved, but only up to a comparatively short height of 3 meters—and with a width much greater than that of the preserved height, could have been originally higher. Indeed, the sections of eastern wall in their entirety do vary in remaining height along their length. And the famous account of Nehemiah describes a rebuilding of at least the damaged upper courses of an existing defensive wall around Jerusalem, just over a century later.

During earlier excavations, a building just inside of this “new” stretch of wall was found to have been destroyed during the invasion. It contained rows of storage jars that had been crushed when the burning building collapsed—a testament to the burning that the Bible describes, exacted by Nebuchadnezzar’s men (2 Kings 25:9).

Of the nature of the new wall-discovery, the press release details, “Over the years, claims have been made that despite the impressive nature of [these eastern] remains, these remnant stone structures should not be seen as wall remains [rather, as terraces allowing for level constructions along the eastern slope]. However, with the uncovering of this new section that connects with these past discoveries [of Shiloh and Kenyon], it seems that the debate has been settled, and that this was unequivocally the eastern wall of ancient Jerusalem.”

The destruction of Jerusalem and the temple is memorialized yearly on the month of Av, from the 7th to the 10th (2 Kings 25:8, Jeremiah 52:12), and particularly on “Tisha B’Av” (the 9th of Av). As such, it is especially meaningful for this latest discovery be released to the public on the same month, in the days prior—archaeology bringing to vivid and tangible life, for a public thousands of years removed, the dramatic history recorded in the Bible.

As well as that warning given long prior by the prophet Moses, for those who would misplace their “trust” in “thy high and fortified walls” (Deuteronomy 28:52)—that they would not be sufficient to save.