Archaeologists identify remains in the City of David as belonging to the infamous biblical catastrophe.
By Christopher Eames • August 3, 2021 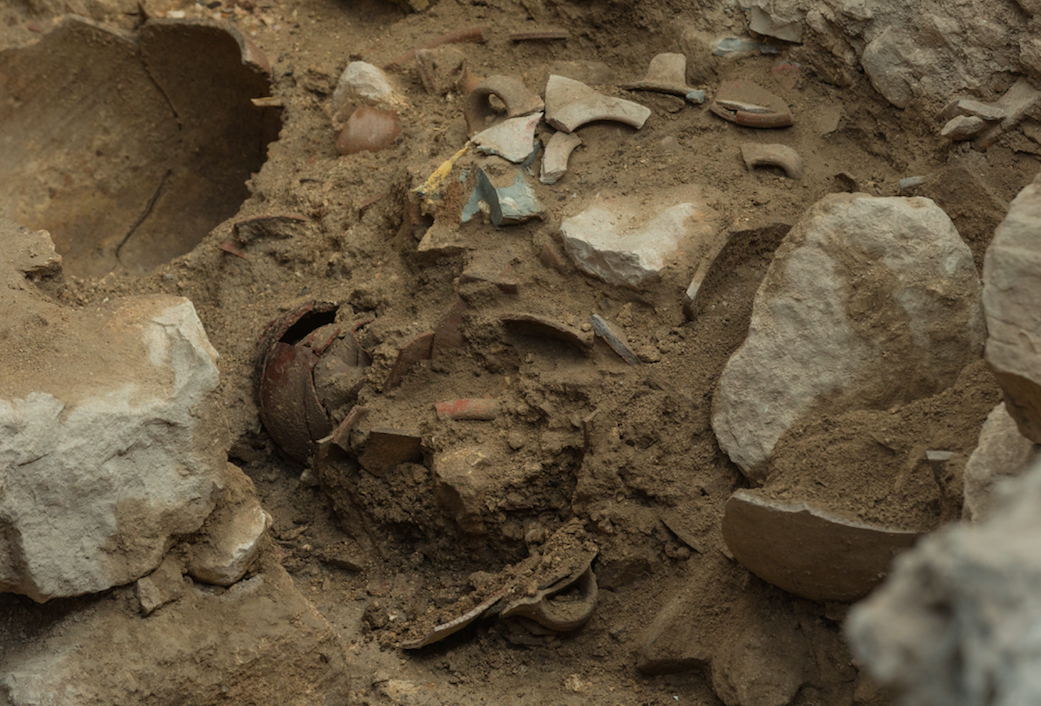 Remains of equipment shattered in the earthquake
Eliyahu Yanai, City of David

Archaeologists working on the eastern slope of the City of David have revealed what they believe to be remains of a catastrophic eighth-century b.c.e. earthquake event described in the Bible.

The Israel Antiquities Authority excavation directors, Dr. Joe Uziel and Ortal Chalaf, uncovered a wall and a series of buildings with remains dating to the eighth century b.c.e. The remains exhibited clear signs of a destruction event: smashed pottery vessels (including bowls, jars and lamps) as well as scattered utensils—even the complete skeleton of a piglet, which had been crushed alive as the surrounding building walls collapsed.

However, unlike with a destruction brought about by a military invasion, there was no burn layer or remains of weaponry. Indeed, the Bible makes no mention of Jerusalem being conquered throughout the eighth century b.c.e. It does, however, make mention of another destruction event entirely: an earthquake.

It was during the middle part of this century that “Amos’s earthquake” hit. It is mentioned in the very first verse of the prophet’s book, added later on to anchor the date of its writing: “The words of Amos, who was among the herdmen of Tekoa, which he saw concerning Israel in the days of Uzziah king of Judah, and in the days of Jeroboam the son of Joash king of Israel, two years before the earthquake” (Amos 1:1). The book contains prophecies of earthquake-type destruction. Furthermore, the eighth-century b.c.e. prophet Isaiah also warned the “City of David” of just such a dramatic earthquake (Isaiah 29:1, 6).

So significant was this event that it was recalled over 200 years later, by another prophet—Zechariah. “And ye shall flee to the valley of the mountains … Yea, ye shall flee, like as ye fled from before the earthquake In the days of Uzziah king of Judah …” (Zechariah 14:5). The reference shows that this catastrophic event was still clearly in the minds of the Jews.

Some six centuries after that, the first-century c.e. Jewish historian Josephus referred to the earthquake, linking it to King Uzziah’s sin of usurping the authority of the priests to make sacrifices in the temple: “[A] rent was made in the temple, and the bright rays of the sun shone through it, and fell upon the king’s face, insomuch that the leprosy seized upon him immediately” (Antiquities, 9.10.4; referring to the leprosy that Uzziah received at that moment, incapacitating him for the rest of his reign—2 Chronicles 26:16-21). Josephus stated that a nearby mountainside collapsed, causing a significant landslide in Jerusalem that destroyed roads and the king’s prized gardens. (As an aside, both kings mentioned as reigning during this time period—Uzziah and Jeroboam ii—have been confirmed by archaeology.)

Abundant evidence of this quake has been found all around Israel. Evidence at various sites include tilted or collapsed walls, twisted and sunken floors, masonry and stones split apart. And again, there is a common denominator—no burn layer or remains of weaponry, as associated with a military destruction, and all dating squarely to the middle-eighth century b.c.e. So great is the amount of evidence spread throughout the Levant, in fact, that scientists have determined that the epicenter was likely in Lebanon and that its strength was probably around a magnitude 8.2, with a Modified Mercalli intensity of 9. Dr. Steven Austin writes: “[This event] appears to be the largest yet documented on the Dead Sea Transform fault zone during the last four millennia. The Dead Sea Transform fault likely ruptured along more than 400 kilometers as the ground shook violently for over 90 seconds! The urban panic created by this earthquake would have been legendary.”

Uziel and Chalaf noted that their discovery may be the first solid evidence in Jerusalem of this very same earthquake. “Interestingly, the earthquake that appears in the Bible in the books of Amos and Zechariah occurred at the time when the building we excavated in the City of David collapsed. The combination of the finds in the field, together with the biblical description, led us to the conclusion that the earthquake that struck the Land of Israel during the reign of Uzziah king of Judah also hit the capital of the kingdom—Jerusalem.

“The earthquake that occurred in the middle of the eighth century b.c.e. was probably one of the strongest and most damaging earthquakes in ancient times, and evidence of its occurrence has been discovered in the past in excavations conducted at a variety of sites throughout Israel.”

Following the destruction, the remains at the City of David site revealed that the city’s inhabitants simply rebuilt on top of the destruction material and continued to occupy the area up until the Babylonian invasion in the sixth century b.c.e.

Uziel and Chalaf’s finds will be put on display for the public at the City of David Research Conference—the Megalim Institute’s annual archaeological conference, which will be held at the beginning of next month.

For more information about “Amos’s earthquake,” read our article “Amos’s Earthquake: A Mountain of Evidence.”