‘Oldest Example of Applied Geometry’ and the Patriarch Abraham

New study of a land survey tablet reveals the mathematical genius of Babylon—and a link to the biblical patriarch, Abraham?
By Christopher Eames • August 10, 2021 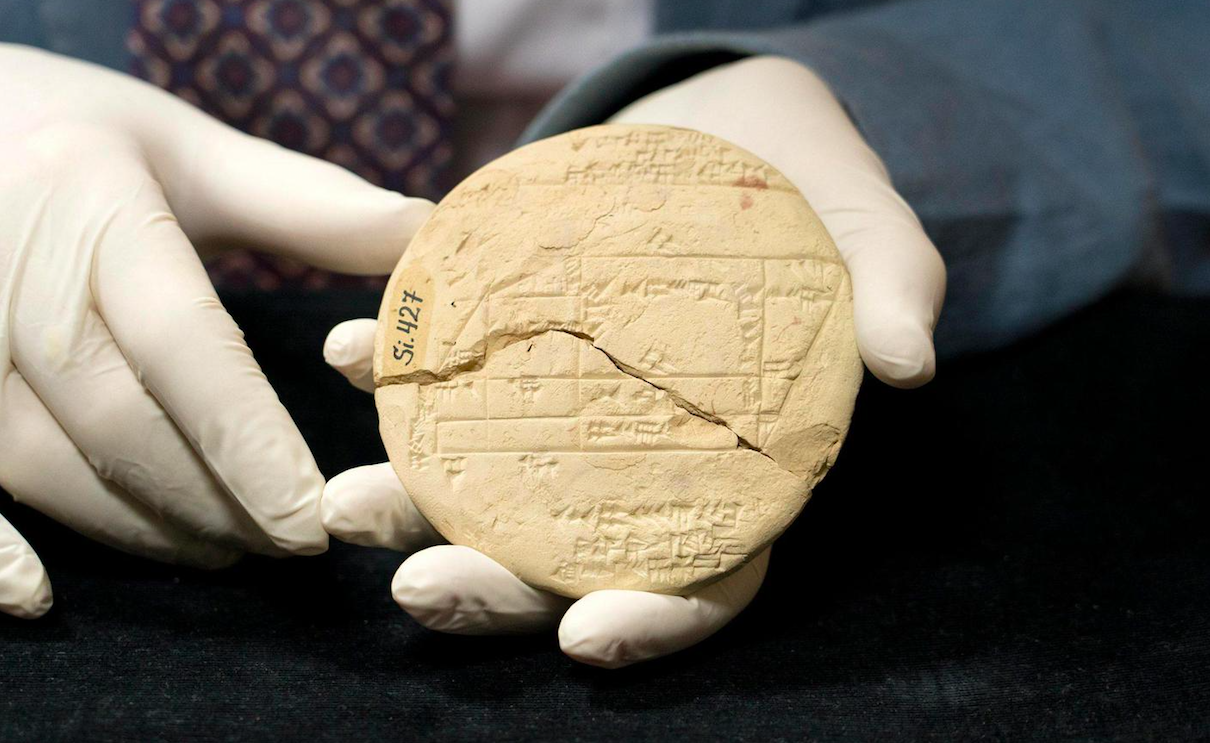 It’s an artifact that was first uncovered nearly 130 years ago. But thanks to recent research, its significance is only now becoming fully understood. According to Australian mathematician Dr. Daniel Mansfield, this Babylonian tablet, known as Si.427, represents the “oldest example of applied geometry in the world.”

Si.427 is a circular tablet discovered in 1894 at Tell Abu Habba (Babylonian Sippar, identified with the biblical Sepharvaim, in modern-day Iraq). It dates to the Old Babylonian Period (1900–1600 b.c.e.), and is currently housed at the Istanbul Archaeological Museum. The face of the disk shows a map of land divided into specific boundaries for the owner, Sîn-bēl-apli, who was selling a part of it. Alongside the outline, the tablet describes his real estate, detailing the type of marshy land and structures on it.

Following his new research published last Wednesday, Dr. Mansfield (of the University of New South Wales) reveals that the tablet shows much more than just a rough property sketch: It is an extremely accurate land survey, demonstrating the use of “Pythagorean triples”—showing an understanding of the Pythagorean theorem—over 1,000 years before the birth of the namesake, Pythagoras, who “discovered” it. “The discovery and analysis of the tablet have important implications for the history of mathematics,” Mansfield states.

Dr. Mansfield explains the tablet, with some of its fascinating details, in the short video below:

Mansfield first made headlines in 2017 with his reanalysis of a related Babylonian artifact from the same period, known as Plimpton 322—identifying it as a unique type of trigonometric table, serving as a sort-of clay “cheat sheet” for calculations necessary for architecture or land area. Mansfield at the time speculated that the triangular calculations of Plimpton 322 served such a practical purpose—now, Si.427 is evidence for the application of that purpose. He believes that the mathematical problems faced by surveyors such as those who documented Sîn-bēl-apli’s land led to the creation of tables like Plimpton 322.

Borders, after all, are a touchy subject, and one that must be absolutely precise. Our Sîn-bēl-apli is mentioned in another tablet in a dispute with a wealthy female landowner over the ownership of lush date palms along the border of their properties. The tablet reveals that their local administrator sent out a land surveyor to settle the matter.

Beyond this face-value demonstration of applied mathematics, however, ancient historians record a specific individual on the scene in Babylon at this very time period, who was a leading light in the subject—thus fitting nicely alongside this continually emerging evidence of Babylonian mathematical and astronomical prowess.

This was the biblical patriarch Abraham.

The Bible describes Abraham as growing up and spending much of his adult years in Babylon, specifically labeling him among the Chaldeans—a term many historians believe referred to the higher, educated classes of Babylon (i.e. Genesis 11:28-31).

The third-century b.c.e. Babylonian historian Berossus wrote: “In the 10th generation after the Flood, there was among the Chaldeans a man righteous and great and skillful in the celestial science.” While Berossus doesn’t give this great scientist a name, the first-century c.e. Jewish historian Josephus tells us that Berossus was writing about Abraham—a man listed in the Bible as being of the 10th generation after Noah. According to biblical chronology, Abraham fits squarely into the Old Babylonian Period—this very same period to which the above tablets, Plimpton 322 and Si.427, date.

Josephus wrote of Abraham’s journey later in life to Canaan and Egypt, explaining that Abraham spread his mathematical wisdom to these parts of the world. “Abram conferred with each of them. … He communicated to them arithmetic, and delivered to them the science of astronomy; for, before Abram came into Egypt, they were unacquainted with those parts of learning; for that science came from the Chaldeans into Egypt, and from thence to the Greeks also” (Antiquities of the Jews 1.8.2; emphasis added). This, in a nutshell, shows just what today’s researchers have discovered: Subjects such as the Pythagorean theorem, an understanding of pi, and elements of calculus can be traced before the Greeks all the way back through Egypt and into Babylon. (As an interesting aside, the Greek Pythagoras himself was educated in Egypt.)

The fourth-century c.e. Roman historian Eusebius cited a work by the second century b.c.e. historian Eupolemus, titled Concerning the Jews of Assyria. Quoting this source, Eusebius said Abraham “surpassed all men in nobility and wisdom, who was also the inventor of astronomy and the Chaldaic art.”

Sir Walter Raleigh’s The History of the World (1614) references several ancient historians, such as the first-century c.e. Philo, who collectively agreed “that Abraham the holiest and wisest of men, did first teach the Chaldeans, then the Phoenicians; lastly, the Egyptian priests, [astronomy] and divine knowledge.” Examples assuring the mathematical and celestial skill of Abraham abound.

And in the theme of this article, there is even a biblical connection of Abraham with land surveying.

Genesis 23 describes Abraham’s purchase of a certain plot of land in Canaan. This account describes him buying territory from the Hittite prince Ephron, who initially declined to accept money for it, offering it to Abraham freely. Upon Abraham’s insistence, the full price was paid.

“So the field of Ephron, which was in Machpelah, which was before Mamre, the field, and the cave which was therein, and all the trees that were in the field, that were in all the border thereof round about, were made sure unto Abraham for a possession …” (verses 17-18). The last part of verse 17, “were made sure,” is actually a single Hebrew word that is at the very start of verse 17 in the Hebrew text. It means to fix, establish, make sure, ratify—here in the context of land surveying, determining exact borders and land features, right down to the number of trees. As verse 18 explains, this documentation was done and assembled in the presence of witnesses who lived in the area. Si.427 certainly illustrates this kind of Babylonian mathematical exactness and pedantry.

But a necessary pedantry. Ephron had originally wanted Abraham to simply take the land—but Abraham (who would have been familiar with transactions in Babylon) insisted on paying the full price to the nearest “shekel,” and apparently insisted on drawing up a detailed agreement that would avoid any future land quarrels between descendants. (Such as was the case with Sîn-bēl-apli—and a theme that would feature repeatedly in the biblical account; for example, the disputing of Israelite, Amorite and Moabite land.) Of course, no one understands bitter land disputes better than the Jewish nation of Israel today.

The discovery of the world’s “oldest example of applied geometry” on Si.427, then, is a fascinating look at the early mathematical knowledge of the Babylonians. But it also reinforces what ancient historians had long affirmed: Greek scientific knowledge was inherited originally from Babylon—and from a leading light in the Babylonian Chaldean scientific community, at that, a patriarch who lived during the Old Babylonian Period: the patriarch Abraham.