Iran Pushes Into the Gulf of Oman

Iranian maritime attacks are growing bolder in the world’s most policed waters.
By Joshua Taylor • August 11 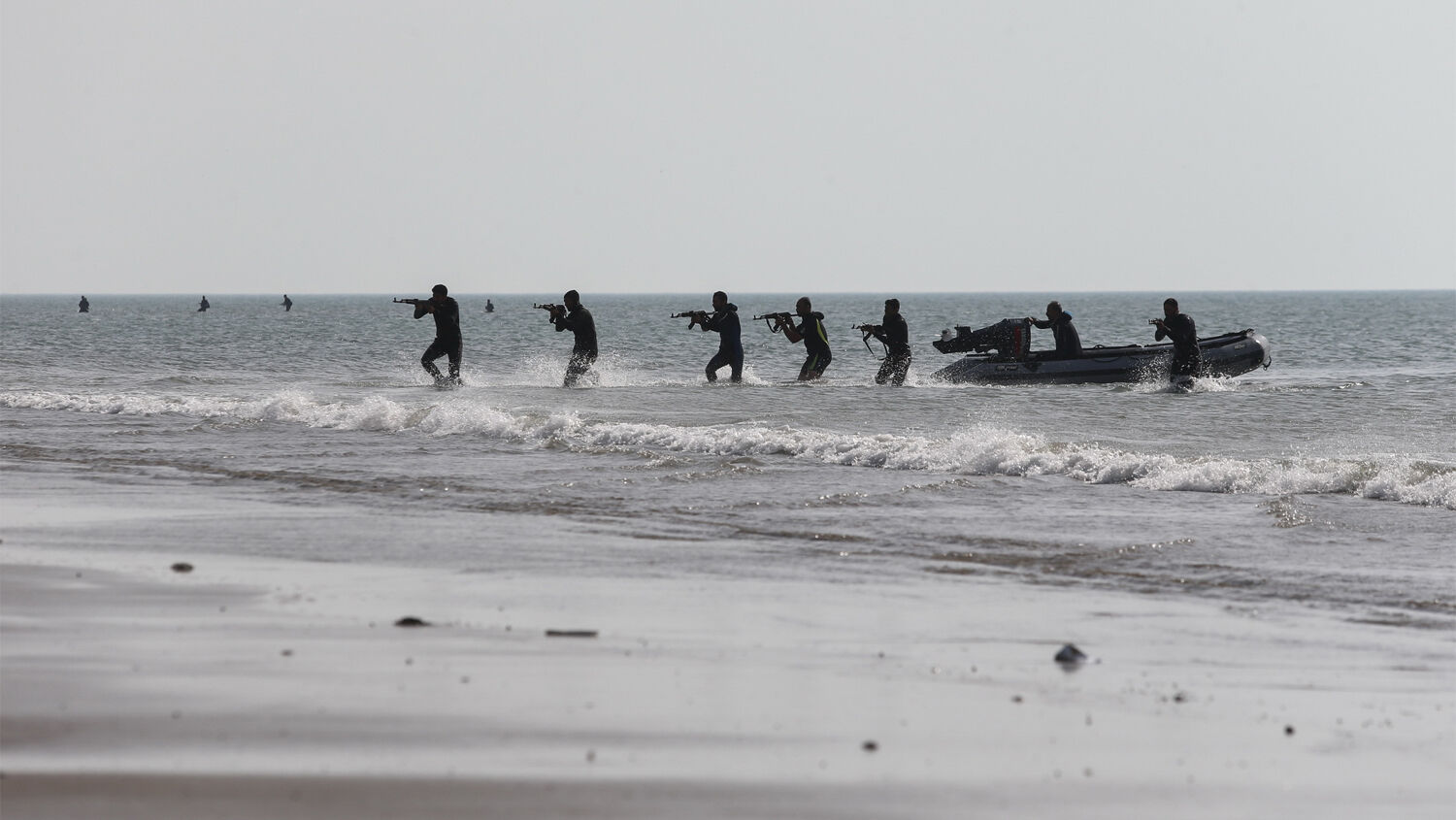 Commando units of the Iranian Army participate in a military drill along the coast of the Gulf of Oman in Makran, Iran, on January 19.
IRANIAN ARMY/HANDOUT/ANADOLU AGENCY VIA GETTY IMAGES

Iranian gunmen attempted to hijack the tanker Asphalt Princess off the coast of Oman on August 3. In an audio recording leaked to the Associated Press, crew members reported five to six armed Iranians boarding the vessel. At 5 p.m. GMT, the ship reported its last location before steering toward Iran. The crew jumped into action to save the tanker by sabotaging the engines. By the time United States and Omani naval forces arrived the next day, the gunmen had fled the ship. No injuries or deaths were reported.

The attempted hijacking came days after Iran attacked the Israel-managed Mercer Street tanker with a suicide drone on July 29. The drone killed a Briton and a Romanian when it struck the roof of the bridge. Britain, Romania and the U.S. reported that the evidence points to Iran. Israeli Foreign Minister Yair Lapid and Defense Minister Benny Gantz identified Saeed Ara Jani, drone commander for the Islamic Revolutionary Guard Corps (IRGC), as the man responsible for the attack. Iran denied any involvement.

This is not the first time Iran has seized tankers in the Strait of Hormuz. In July 2019, Iran took control of two British tankers and attempted to seize one other. This was in retaliation for the British seizure of an Iranian oil tanker passing through the Strait of Gibraltar; the tanker was carrying oil to Syria in violation of European Union sanctions.

Until recently, Iran has kept most of its attacks confined to the Persian Gulf and Strait of Hormuz. With the recent attacks, however, Iran is aggressively expanding its naval reach. Iran wants the world to know that it controls the Persian Gulf, Strait of Hormuz and Gulf of Oman; if you pass through those waters, Iran can reach you.

The Persian Gulf, Strait of Hormuz and Gulf of Oman are crucial to global oil supply. Almost all the Middle East’s oil-exporting countries use these waters to export oil. The Strait of Hormuz is particularly important; last year, 18 million barrels of oil passed through the strait every day.

Iran has threatened on many occasions to shut down the Strait of Hormuz. In July 2018, then Iranian President Hassan Rouhani threatened to close the strait when United States President Donald Trump attempted to cut off Iran’s oil exports. IRGC Cmdr. Mohammed Ali Jafari said, “We will make the enemy understand that either all can use the Strait of Hormuz or no one.” When President Trump announced sanctions on Iranian oil exports in April 2019, IRGC Navy Cmdr. Alireza Tangsiri also threatened to close the Strait.

So what has kept Iran from closing the strait?

Iran is under crippling U.S. sanctions imposed by President Trump. Iran needs all the money it can get to support itself and its radical Islamist agenda. Just as other oil-rich Middle East countries must use this critical waterway, so too must Iran. Currently, it uses this waterway for roughly 82 percent of its export revenue. The oil Iran exports through these waters is the only thing keeping it afloat.

Why then is Iran escalating tensions in the Gulf of Oman?

Iran just completed the Goreh-Jask pipeline, which has the capacity to transport a million barrels of oil per day. This is a game-changing 50 percent increase for Iran’s oil exports. More critically for Iran, it completely bypasses the Strait of Hormuz and delivers Iranian oil right into the Gulf of Oman.

In the past, shutting down the strait was a double-edged sword for Iran. This pipeline allows Iran to shut down the strait, wreak economic havoc on the world, and avoid scuttling its own economy.

Iran does not have the raw naval power to set up a blockade that could hold against the world’s naval forces. But it can use underwater mines, speedboats and its growing drone arsenal to make passage through the Strait of Hormuz too dangerous and expensive. While the U.S. Navy would eventually put an end to Iran’s antics, the impact on the world economy would be severe. As we wrote in April 2019, “Iran doesn’t have to permanently close the strait to cause a lot of damage. Just closing it down for weeks or days would cause major delays, soaring oil prices and other problems.”

This kind of pushy foreign policy from Iran is exactly what the Bible prophesies in Daniel 11:40. In his booklet The King of the South,Watch Jerusalem editor in chief Gerald Flurry writes, “Daniel 11:40-43 is an end-time prophecy. It is about a nation that is always pushy in its foreign policy. It pushes until it starts a war.” This prophecy is about radical Islam, led by Iran.

Iran will continue to push its radical agenda in the waters along its southern coast. These pushes will increase in violence and regularity until Iran is forcefully and violently stopped.