The Mediterranean Is on Fire

Another disaster makes its way to Europe, and beyond.
By Mihailo S. Zekic • August 19 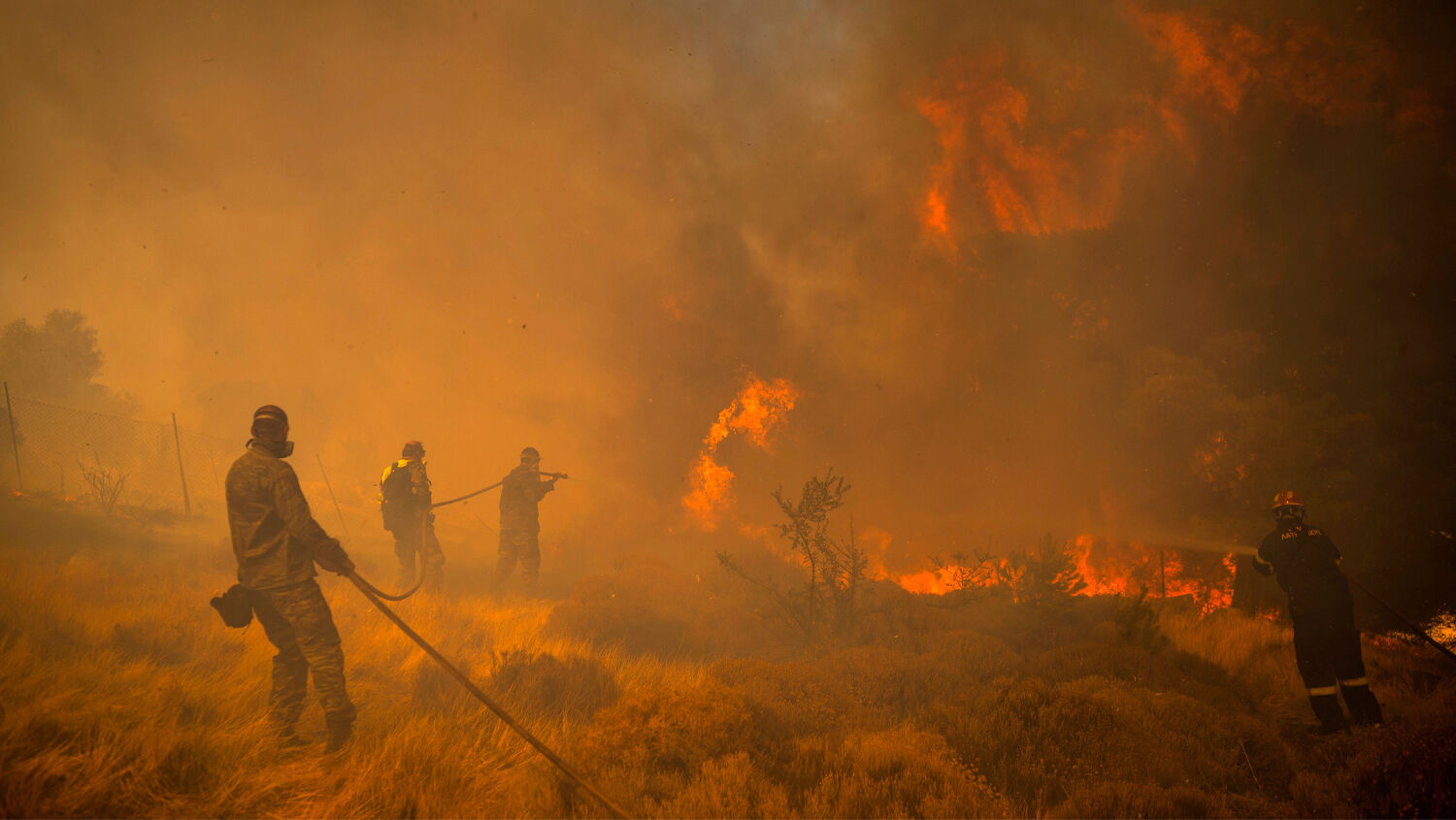 Firefighters and volunteers work to extinguish a fire in the village of Markati, near Athens, on August 16.
Angelos Tzortzinis | AFP via Getty Images

A weather system is turning the Mediterranean region into a hothouse. The heat dome “Lucifer” is causing temperatures to rise and creating large-scale disasters in the process. It is affecting countries from Europe to Africa to the Middle East.

Lucifer is technically an anticyclone, a weather system that spins in the opposite direction of a cyclone (in the Northern Hemisphere, clockwise). Unlike cyclones and hurricanes, Lucifer isn’t blowing down houses per se. But like its rebellious namesake, it is leaving a trail of destruction in its path.

Perhaps the biggest story associated with Lucifer is that it brought Europe its highest temperatures ever recorded. Floridia, a town in Sicily, reported a temperature of 48.8 degrees Celsius. This beats the previous European record by 0.8 degrees Celsius. Floridia is known for its harvest of snails for eating; but its snails have been shriveling up in the intense heat. Snail farmer Giusi Pappalardo said she “counted 80 kilos of dead animals in one go.”

It’s not just the heat itself that’s attacking Sicily; fires are, too. As of this month, about 47 percent of Sicilian towns are being impacted by wildfires.

Across the sea from Italy, wildfires are also plaguing Algeria. Although much of the North African country is desert, much is also covered in forest. As of August 15, 19 fires were ravaging the country. According to Sky News, the fires have, as of August 16, killed 73 people, including 28 soldiers.

Djamel Ben Ismail, a 38-year-old Algerian artist, was murdered by a crowd after being accused of starting some of the fires. The police said he had actually come to help. The Algerian authorities arrested 36 people implicated in the murder.

In Europe, wildfires are also surging in Greece. Prime Minister Kyriakos Mitsotakis says it is the country’s worst heat wave in over three decades. One fire close to Athens is covering the Greek capital in thick smoke. The heat wave is also hurting Greece’s electricity grid. Mitsotakis is urging Greeks to “limit their [electricity] consumption especially at the beginning of the afternoon and during the night.”

NOW - People evacuated by ferry from raging wildfires in #Greece.pic.twitter.com/fh8B0WaGW0

Meanwhile, Israel has been battling “one of the biggest [wildfires] in the country’s history” in the hills outside Jerusalem, with over 25,000 dunams (6,200 acres) of forest area burned.

Turkey is also experiencing wildfires. According to the Turkish state broadcaster Daily Sabah, fires have been raging there since July 28.

But that’s not the only crisis hitting Turkey. Its region by the Black Sea is being hit by severe floods. Al Jazeera reported on August 16 that at least 77 people have died, with 47 missing. This also follows the “heaviest rainfall in a millennium” in China, as well as catastrophic and deadly flooding in northern Europe, causing “one of the worst natural disasters in Germany’s living memory.”

Most people are blaming climate change. Mitsotakis said, “The climate crisis is here and it shows us that everything needs to change, from the orientation of the economy to national energy policy.” Greek Deputy Minister of Civil Protection Nikos Hardalias said, “We are no longer talking about climate change but about a climate threat.” Mehmet Emin Birpinar, writing for the Daily Sabah, said, “Climate change rings alarm bells for the entire world,” calling climate change “a common issue for the whole world to focus on.” The Telegraph quoted the United Nations International Panel on Climate Change, which said that “‘concurrent heat waves and droughts’ have ‘increased in frequency over the last century at the global scale due to human influence.’”

Is the answer to why disasters like this happen really climate change? Or is there a deeper cause?

“When climatic disasters occur, the usual political and media response is to blame the trend on ‘climate change,’” we write in our free booklet Why ‘Natural’ Disasters? “The worse the disaster, the louder the calls for taking action against climate change by addressing the supposed man-made causes, such as carbon emissions and the use of fossil fuels.”

This view about “climate change” has taken hold of millions of minds around the world. It is often presented as if it were irrefutable scientific fact. The truth, though, is that it is an ideology, and it will negatively affect every single person who falls for it!

This is not a political view. We aim to give you God’s view. Our great Creator knows that climate change is not the cause of weather disasters!

The Bible reveals that God is in control of the weather.

“[T]he Lord hath his way in the whirlwind and in the storm, and the clouds are the dust of his feet. He rebuketh the sea, and maketh it dry, and drieth up all the rivers …. The mountains quake at him, and the hills melt, and the earth is burned at his presence …” (Nahum 1:3-5 King James Version).

“And the Lord God of hosts is he that toucheth the land … and it shall rise up wholly like a flood; and shall be drowned, as by the flood of Egypt” (Amos 9:5, kjv).

This isn’t out of a malevolent desire to hurt people. God uses natural disasters to get people to repent of their sins. It’s His correction for a humanity that has forgotten Him. “My son, despise not the chastening of the Lord, Neither spurn thou His correction; For whom the Lord loveth He correcteth …” (Proverbs 3:11-12). And the Bible prophesies a surge in such calamitous climate events just prior to the coming of the Messiah.

Blaming climate change contributes to the problem. By pointing people away from the true cause, they completely miss the solution. To learn more, please request a free copy of Why ‘Natural’ Disasters?