‘Ice Age’ Megafauna and the Book of Genesis 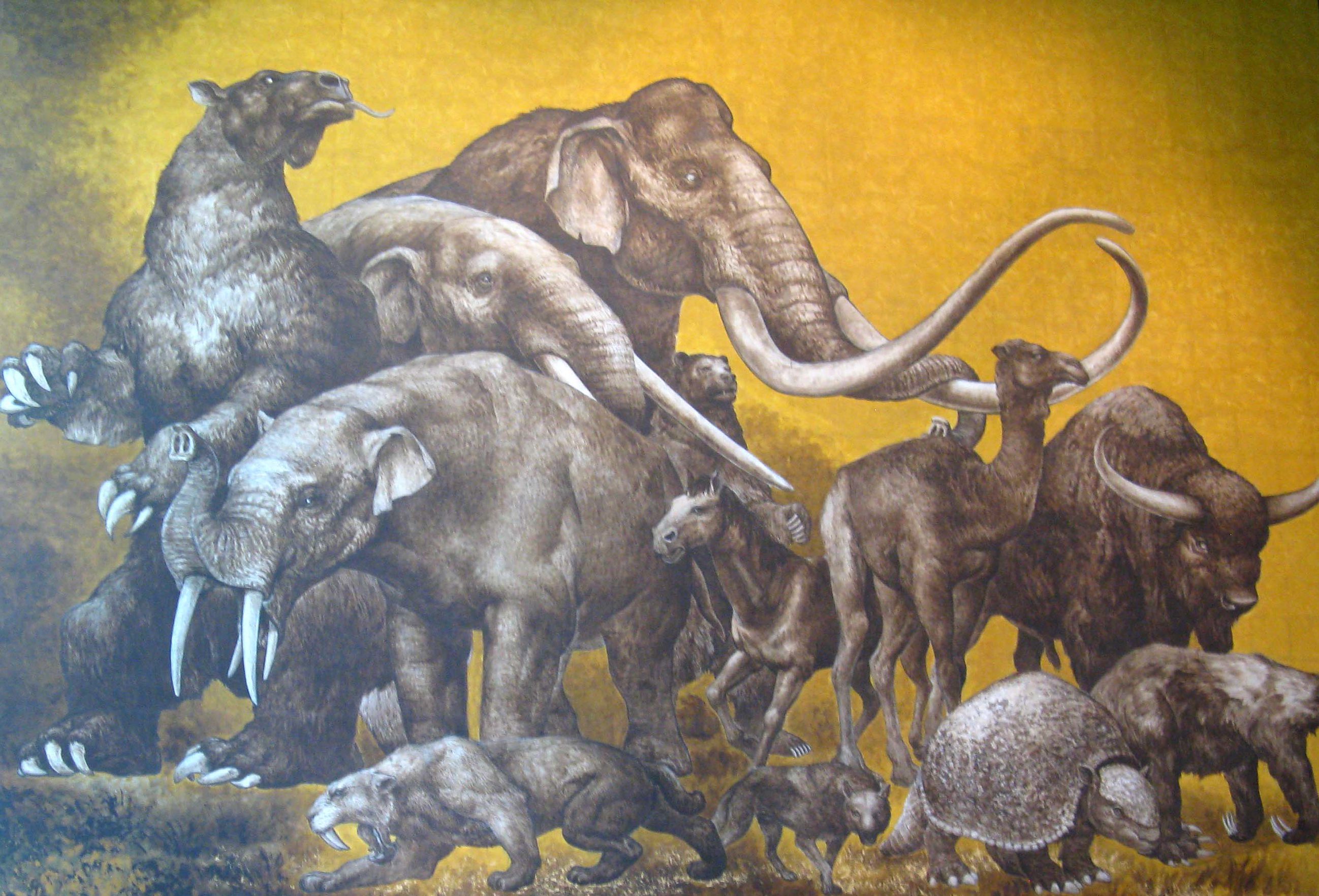 There’s something truly strange about the world at the time of earliest mankind. The Bible describes this antediluvian world as a time of immensely long lifespans (Genesis 5) and “giants” (Genesis 6:4).

It sounds fantastical. But it’s not just the Bible. The field of palaeontology has shown that something was very peculiar about the flora and fauna of the early world of mankind—a time commonly referred to as the “Pleistocene Epoch”—that terminated with the “Quaternary Extinction” event (typically dated to around 10,000 years ago). Huge lifespans aside (for now), when it came to animal sizes, these early “ice age” creatures were simply enormous.

From Mammoth Rodents to Mammoth Mammoths

Take the example of Josephoartigasia monesi. Rodents can be scary enough as it is—and the modern descendant of this animal, the pacarana of South America, is one of the largest rodents alive today, at 15 kg and 80 cm long. Its prehistoric ancestor, however—Josephoartigasia monesi—was 3 meters long, 1.5 meters tall and weighed up to 1.5 tons. That’s some rodent! And it had a fearsome bite force from its jaws twice that of a great white shark.

Another example: The wombat is a rather cute, plump Australian marsupial reaching up to 1 meter in length and weighing up to 35 kg. It’s prehistoric Australian ancestor, Diprotodon, was 3 meters long, up to 2 meters tall, and weighed nearly 3 tons.

Or take the sloth family. Modern sloths can grow up to 80 cm long, and weigh up to 8 kg. Megatherium, the ancestor of our modern sloths, was 6 meters long, weighing up to 4 tons. That’s 500 times as heavy.

Most armadillos today are about 75 cm long (including the tail). The modern giant armadillo grows up to an impressive 1.5 meters and weighs up to 54 kg. But that is nothing compared to the truly giant armadillo “relatives” of the ancient world, the Glyptodonts: Reaching nearly 3.5 meters long, these veritable prehistoric tanks weighed up to 2 tons.

Thus far we have compared relatively small modern creatures with their exponentially larger ancestral relatives. What about today’s largest animals?

The African elephant is the largest existing land animal, reaching 3.4 meters tall at the shoulder, weighing up to 7 tons. Yet even this pales in comparison to the largest-discovered prehistoric elephant: the Palaeoloxodon namadicus, which is estimated to have measured up to 5.2 meters at the shoulder and weighing up to 22 tons. It is arguably the largest-discovered land mammal known to man (rivaled only by the 20-some-ton hornless rhinoceros Paraceratherium/Baluchitherium).

Polar bears are the largest modern land carnivores, with large examples weighing up to an impressive 700 kg (and grizzlies up to around 400 kg). Prehistoric bears weighed up to 2,000 kg—2 tons.

You name it, if we have it today, there’s a good chance it was huge anciently: Giant hippos; giant kangaroos; 4.5-meter-tall camels, weighing 2.5 tons; Irish elk with antlers spanning 4.5 meters; giant rhinos weighing up to 5 tons; horses measuring more than 2 meters at the shoulder and weighing 1.3 tons; massive canines known as bear dogs, the mass of one such example estimated at nearly 800 kg; 3-meter-long otters; 3-meter-tall apes; big cats weighing nearly a ton; crocodiles reaching 12 meters long; lizards at 7 meters long; flightless birds over 3 meters tall and weighing up to 500 kg.

These creatures are classed as megafauna—and they are known to have existed at the same time as early mankind.

If you had suggested all this several centuries ago, before many of these discoveries had been collated and publicized, there’s a good chance you would have been considered a fool. Long lifespans of several centuries would have been much more believable. The reverse is considered true today. But if the prehistoric world supported such mind-staggeringly large and hefty creatures—animal “giants”—is it beyond the realm of possibility that it likewise supported the incredibly long, antediluvian lifespans described in the Bible? And could it be possible that the two are related—that a gradual maturing across elongated lifespans contributed in some way to the development of creatures to such massive sizes?

Clearly, the Bible reveals a picture of something about the pre-Flood environment being dramatically different—including the presence of girthy, “giant” humans.

Archaeology reveals that ancient humans, such as Neanderthals and Denisovans, were more proportionally bulky and stocky. (Take a look at our article “Cavemen Are People Too!” to learn how Neanderthals specifically fit a description in the book of Genesis.) Added to this, there is also the peculiar nature of prehistoric, “overdeveloped” human bones. In his book Exploring Ancient History, Roy Schulz wrote: “One of the chief characteristics of all these [prehistoric human] remains is the extreme longevity characteristic of the skeletons. The massive proportions of the body. The great development of the muscular processes, the extreme wearing of the teeth—without our characteristic amount of decay—the obliteration of the sutures or seams between the various bones of the skull and the indications of slow ossification of the ends of the long bones, all point to the inevitable conclusion that the earliest man matured slowly and attained great length of life—just as Genesis declares. Such characteristics of the skeletal frame are completely absent from modern degenerate man.”

And as Sir J. William Dawson wrote in The Meeting Place of Geology and History, “That these ancient men did attain great age is demonstrated by the fact that their remains are usually found with fragmentary skeletons of youths and babies not exhibiting those characteristics.”

The antediluvian environment was clearly very different to our modern Earth—something evidenced in earliest Bible history and in palaeontology. Is it far-fetched to believe that alongside gigantism, there could have been a corresponding phenomenon of general longevity? After all, there is a known link between longevity, overall size and cooler climates (something well associated with the “ice ages” of the Pleistocene epoch). If conditions on Earth were such to produce megafauna, perhaps they could have supported longer life? (For more information on longevity in the Book of Genesis, see our article “Biblical Longevity of the First Humans.”)

And as for another, Bible-related point: It is often a point of biblical debate as to how “all the animals fit aboard Noah’s ark.” This has long been answered by the fact that not every species was necessarily represented aboard the ark—but as the Bible itself states, every animal “kind” (Genesis 6:20), or “family” classification, from which all modern creatures are thus descended.

But to this point: Isn’t it ironic that of each kind of megafauna that existed among prehistoric man, only far smaller descendants are represented to this day? That they continue on in across-the-board smaller representation, while every example of their gigantic ancestor-relatives died out thousands of years ago? The story is not the same, however, with sea creatures: For example, our modern blue whale, at up to 30 meters long and 200 tons, remains the largest-known creature ever to have existed; our modern sperm whale the largest predatory toothed-creature known to have existed; the modern colossal squid the largest-known cephalopod to have existed. The list goes on.

That’s a rather “coincidental” match for the general picture given in the biblical account. Or is it more than just coincidence?

Something, then, was very different about the terrestrial world of prehistoric man. Certainly, the phenomenon of mega-sized creatures. But besides all of the above, there are further links with the earliest biblical account in Genesis. There is the genetically confirmed human descent from single male-and-female ancestors. The rather excellent scientific choice of a rib from which to create Eve. The remarkable prehistoric “loss” of serpent’s legs, resulting in the slithering snakes that we are familiar with today. The picture that science has now been able to paint, of an antediluvian “world of debauchery” and cannibalism. The “Quaternary Period Extinction” wiping out untold numbers of animals and humans—fitting alongside the biblical extinction account of Noah’s day—and a following “normalization” of natural life, animals and climate, to that we see today. Even the “Dinosaur Age” fits remarkably alongside several biblical passages. Perhaps the book of Genesis deserves more scientific credit than it receives.

For more information, take a look at our article “The Prehistoric World vs. Genesis.”