Has the Seal Impression of Eliakim, Son of Hilkiah, Been Discovered?

First it was King Hezekiah, then Isaiah the prophet. Now evidence has been discovered of another royal official from the same time period.
By Brent Nagtegaal 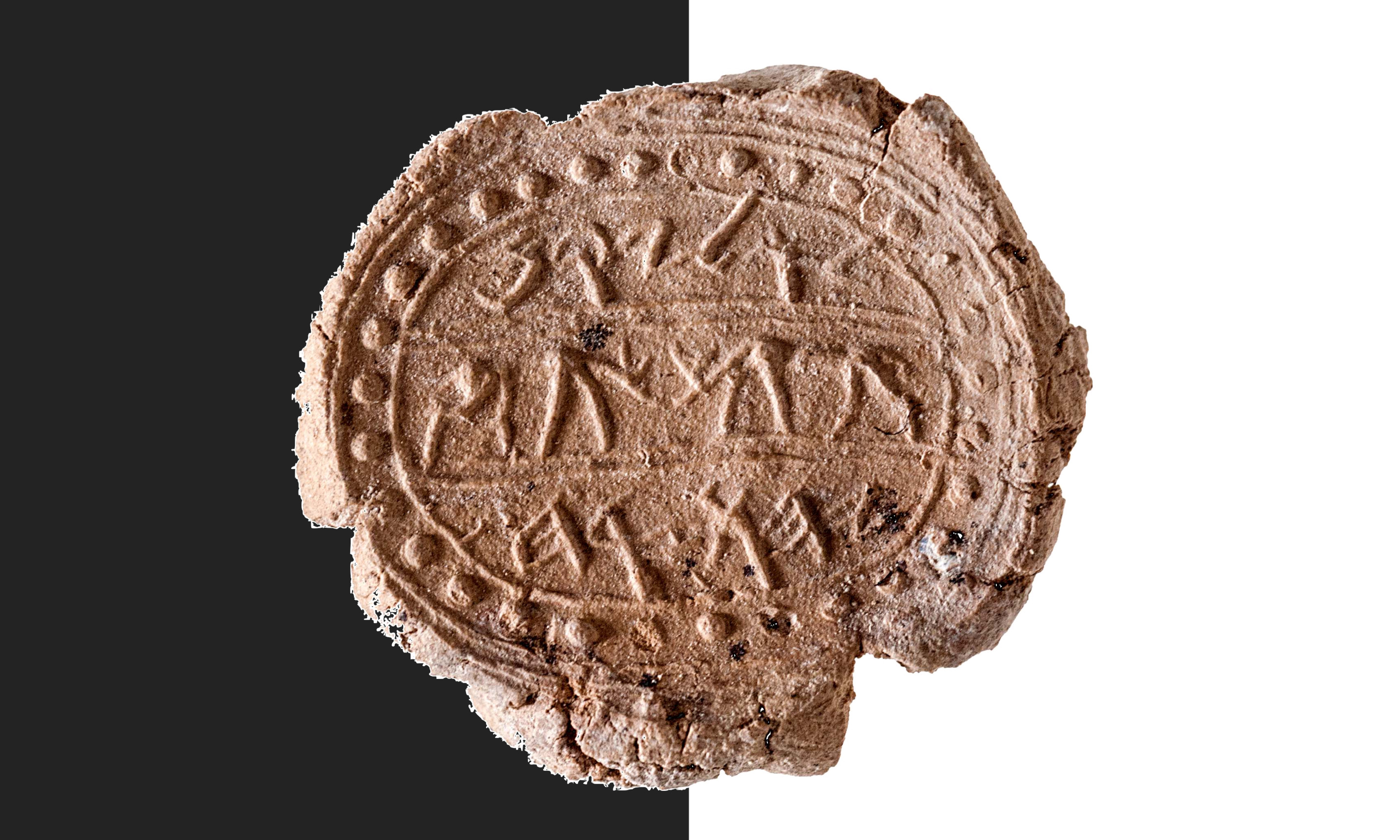 Excavations at Tel Lachish have unearthed two identical seal impressions that scholars believe may belong to the chief steward of Judah’s King Hezekiah. This steward, Eliakim, the son of Hilkiah, is referred to in both 2 Kings and the book of Isaiah. All totaled, he is mentioned nine times in Scripture. In Isaiah 22, Eliakim is described as holding the “key” to the royal house of David. This prominent official was critical in conveying messages between King Hezekiah and Assyrian Emperor Sennacherib’s officials during the latter’s failed campaign to take Jerusalem in the late eighth century b.c.e.

The beautifully crafted seal impressions belonging to Eliakim were unearthed in 2014 during renewed excavations at Lachish, led by Hebrew University’s Yosef Garfinkel, Michael G. Hasel and Martin G. Klingbeil of Southern Adventist University. A report authored by the excavating archaeologists (as well as by Nestor H. Petruk) appeared in the May 2019 issue of Bulletin of the American Schools of Oriental Research, but has largely been overlooked in popular reporting.

The first of the identical impressions (otherwise known as a bulla) was discovered in situ inside a small juglet that was lying in a destruction layer left by King Sennacherib’s assault on Lachish. A second identical bulla was identified months later, after the earth surrounding the juglet was sent to Jerusalem to be wet-sifted.

The destruction of the fortified city of Lachish in southern Judah is well-attested to in the archaeological record of the site (Lachish level iii). The fall of Lachish is also documented on the wall reliefs at Nineveh, where King Sennacherib pictographically represented his conquest of the city. Additionally, the Bible records Lachish’s fall in 2 Kings, 2 Chronicles and Isaiah. Thus, both seal impressions were found in the correct context to relate them to the biblical event.

According to the report, the relationship between the two names Eliakim and Yehozarah is most probably clarified by inserting “son of.” While seal impressions often contain a ben (meaning “son of”), there are several examples where the ben is absent but implied. For example, the seal impression of King Hezekiah himself, discovered in Eilat Mazar’s 2009–201o Ophel Excavations reads, “Hezekiah · Ahaz.” Here, “son of” is clearly implied. Thus, the Lachish bulla could be understood to say, “Belonging to Eliakim, [son of] Yehozarah”

The seal impression, then, doesn’t identify Eliakim’s father as Hilkiah, but as Yehozarah. So how could it belong to the biblical figure?

In their report, the excavators note that the name Yehozarah does not appear anywhere in the Bible. Yet it does appear on a seal impression that surfaced on the antiquities market in 1974. Although it wasn’t discovered in a controlled archaeological excavation, scholars consider this Yehozarah impression to be authentic, and it has been dated epigraphically to the time of Hezekiah. This bulla reads: “Belonging to Yehozarah, son of Hilkiah, servant of Hezekiah.”

Yehozarah appears only a handful of times in the archaeological record. The two Lachish bullae identify Yehozarah as Eliakim’s father. And the antiquities market bulla has Yehozarah as the son of Hilkiah (who was also a servant to King Hezekiah).

Combining the two seal impressions, the scholars see three generations here: Eliakim, son of Yehozarah, son of Hilkiah. Thus, Hilkiah was actually Eliakim’s grandfather, not his immediate father. The Bible allows for the skipping of a generation, especially if the grandfather was more well-known than the father himself. The biblical word for “son” is used in the same manner for “grandson.” The researchers highlight numerous biblical examples of this, including Laban and the children of Leah and Rachel, Saul and Meribbaal, Nimishi and Jehu, Iddo and Zechariah (among others).

The manner in which the name Hilkiah is used also attests to its special status. Eliakim is nearly always mentioned with this “son of Hilkiah” appellation. The same is not true, however, for Shebna and Joah, individuals mentioned alongside Eliakim. “Then said Eliakim the son of Hilkiah, and Shebnah, and Joah, unto Rab-shakeh …” (2 Kings 18:26; in fact, Shebna’s father is never mentioned in the biblical text, although Joah’s father, Asaph, is sometimes mentioned). The Bible draws extra and repeated attention to the importance of Eliakim’s “father” three times in this single chapter. Clearly, this is not a regular listing of a “father’s name.” It’s something unique that the Bible emphasizes.

Garfinkel, Hasel, Klingbeil and Petruk concluded their discussion this way: “Thus, it is possible that the bullae from Lachish presented here stem from the personal seal of Eliakim the royal steward in the time of Hezekiah (according to 2 Kings 18:18), son of Yehozarah (not mentioned in the Bible but on the bulla from the Israel Museum) and grandson of Hilkiah (also mentioned in 2 Kings 18:18).”

The scholars also drew attention to the imagery (iconography) of the bullae. Impressed in the central register of each seal impression are two grazing does, facing each other. The image of does is consistent with other seal impressions discovered at Lachish (and elsewhere in Judah) from the same period. The grazing doe motif is predominately found in Judah, as opposed to the northern tribes of Israel.

A motif of a grazing doe—which is believed to symbolize prosperity—is inscribed on the seal impression of Isaiah the prophet, discovered by Dr. Eilat Mazar in Jerusalem. The Prophet Isaiah was a contemporary of both Eliakim and Hilkiah, and this kind of imagery is found throughout the book of Isaiah (for example, Isaiah 11:6; 13:14 and 35:6).

There have been many other unprovenanced bullae, likely from around the same period, that feature the grazing doe. Two of these can be directly connected to the reign of King Ahaz, the father of Hezekiah. It is possible that the image was related to those in religious service to the Judean monarchy throughout the long eighth-century service of Isaiah the prophet. “It stands to question if this persisting motif … is not an indicator for an intentional royal strategy to preserve a religious and political national identity,” the report states. This would fit well within the period of religious reform led by the Prophet Isaiah and supported by King Hezekiah.

Put together, both the inscription and the iconography on the bulla fit extremely well within the context of the biblical narrative during the time of Isaiah and King Hezekiah. And while it’s impossible to be 100 percent certain that the seal impression belongs to Eliakim, Hezekiah’s royal steward, the evidence strongly points to this being the case.

This discovery, then, brings to life one of the most prominent historical personalities related to King Hezekiah. As recounted in Isaiah 22, Eliakim was not always in such a lofty position. However, he was destined to replace the disgraced Shebna and hold the keys to the royal house of David.

“And it shall come to pass in that day, That I will call my servant Eliakim the son of Hilkiah; And I will clothe him with thy [Shebna’s] robe, And bind him with thy girdle, And I will commit thy government into his hand; And he shall be a father to the inhabitants of Jerusalem, and to the house of Judah. And the key of the house of David will I lay upon his shoulder; And he shall open, and none shall shut; And he shall shut, and none shall open” (Isaiah 22:20-22).

The designation “in that day” gives this passage a strong prophetic tone. As noted throughout the Bible, “in that day” often refers to the time period directly preceding the arrival of the Messiah (Amos 9:11; Ezekiel 29:21). Thus, this passage suggests there will be a modern-day type of the ancient Eliakim—a man who, like his ancient counterpart, is honored to hold the keys to the house of David.