Uncovered: A multimillion-liter wine-making industry (with a biblical origin?)
By Christopher Eames • October 10 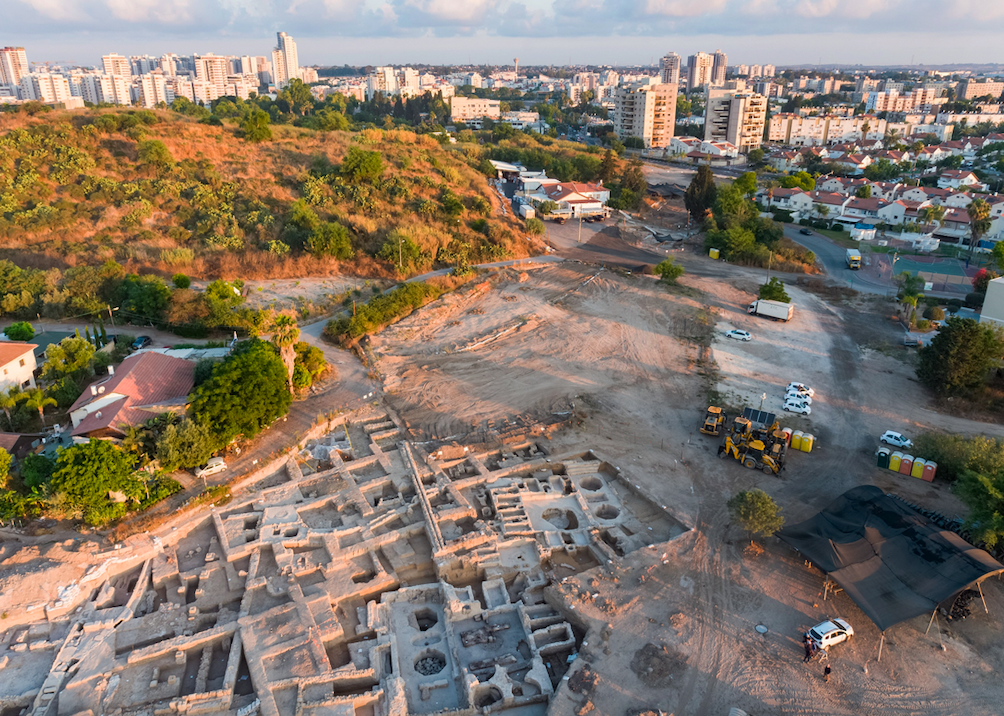 Archaeologists working at the southern coastal city of Yavne (biblical Jabneh/Jabneel) have announced the “fruits” of two years of excavation: the largest-discovered Byzantine-period wine-making complex in the world, circa 1,500 years old. A huge industrial estate was unearthed containing five large winepresses, warehouses, kilns for creating wine containers, and tens of thousands of amphorae fragments, as well as whole vessels (clay containers for holding the wine). It is estimated that the facility churned out some 2 million liters of wine per year.

The five barefoot-treading winepresses each covered an area of about 225 meters, with octagonal-shaped vats for collecting the wine. Notably, alongside the scale of the site was also the craftsmanship, featuring decorative architectural elements.

“‘Gaza and Ashkelon Wine’ was considered a quality wine brand of the ancient world,” stated the Israel Antiquities Authority archaeologists. “So far, other sites where wine was produced are known from the southern coastal plain, but now, we seem to have found the main production center of this prestigious wine. From here, commercial quantities were transported to the ports, and then throughout the Mediterranean basin.”

Yavne, located alongside this traditionally Philistine region (2 Chronicles 26:6), was further discovered by the archaeologists to have a long-standing wine-making tradition. Earlier winepresses were discovered at the site, dating to the Persian period (which spanned the sixth to fourth centuries b.c.e.). During this period, the territory, including Yavne, was controlled, or heavily influenced, by the Phoenicians of Tyre and Sidon—and the governor Nehemiah specifically relates “problems” with wine manufacturing and Tyrian merchants around this time.

“In those days saw I in Judah some treading winepresses on the sabbath, and bringing in heaps of corn, and lading asses therewith; as also wine, grapes, and figs, and all manner of burdens, which they brought into Jerusalem on the sabbath day …. There dwelt men of Tyre also therein, who brought in fish, and all manner of ware, and sold on the sabbath unto the children of Judah, and in Jerusalem” (Nehemiah 13:15-16). Intermarriage was also noted between the Jews and foreigners of this general coastal region (verses 23-24).

Ezra also notes an edict from King Artaxerxes for large deliveries of wine to be available for Jerusalem at this time (Ezra 7:22)—it is possible that this could have been provided in part from the Yavne wineries.

Following the destruction of Jerusalem in c.e. 70, Yavne (and its vineyards) became the central hub for Judaism. “In the Mishna it is said that after the destruction of Jerusalem, the Jewish leadership migrated to Yavne, and that the sages of Yavne lived in a vineyard and studied Torah. The excavation shows a continuum of existence of the wine industry at the site over many centuries of years,” the archaeologists’ release noted.

The mayor of Yavne, Zvi Gov-Ari, praised the efforts of the archaeologists, stating: “The impressive findings strengthen the recognition of the importance of the city of Yavne and its glorious past throughout history.” A major tourist area is planned for the site, including a viewing bridge over the large excavation area.