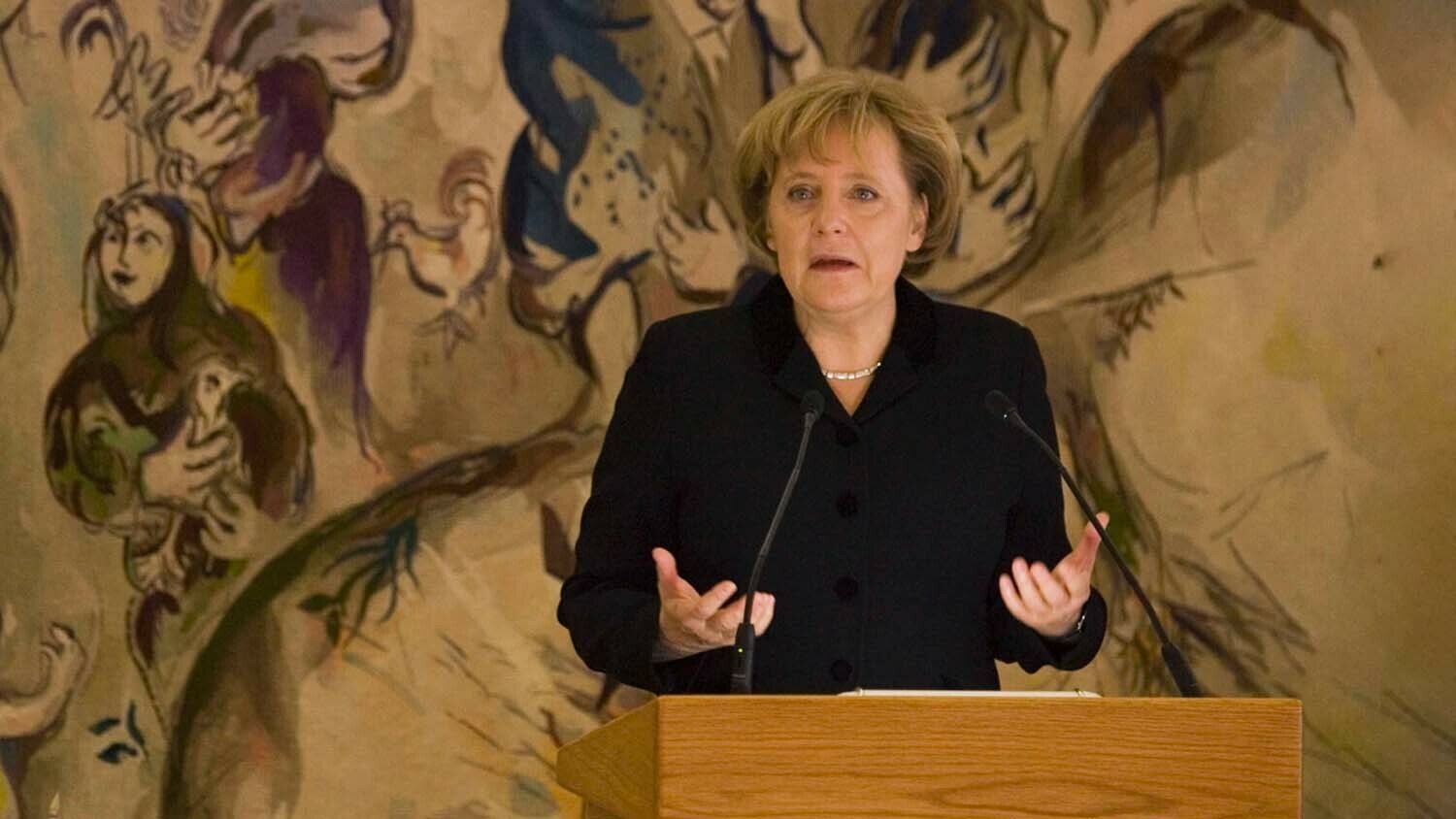 German Chancellor Angela Merkel speaks ahead of a special session of the Israeli parliament in the Chagall state hall on March 18, 2008, at the Knesset in Jerusalem, Israel.
SEBASTIAN SCHEINER-POOL/GETTY IMAGES

More than just her German supporters will be disappointed when German Chancellor Angela Merkel soon leaves office. Many Israelis too will be saddened to see her go.

For the past 16 years, Ms. Merkel has been a stalwart friend of the Jews, living both in Israel and in Germany. She has visited Israel more than any other world leader. During every visit, she initiated joint cabinet sessions between her government and Israel’s—an outward sign of closeness. Under her watch, Germany declared that part of its reason for being is to protect the Jewish state.

But most crucially for Israel, Ms. Merkel always took responsibility for her country’s horrific slaughter of 6 million Jews during the Holocaust.

This week, Merkel completed her eighth official visit to the State of Israel, meeting with Israeli leaders, holding a final joint cabinet session at the Knesset, and touring, for her sixth time, Yad Vashem, Jerusalem’s Holocaust museum.

At the joint cabinet session on Sunday, Merkel again expressed Germany’s responsibility for the Holocaust. “The story of the Shoah is of course a singular event for which we continue to bear responsibility in every phase of history, including in the future. We are now in a transition phase where there will soon be no witnesses left, which is why we have to be aware that we always keep this part of our sad and terrible history in our hearts and minds in order to simply draw the right lessons for the future. And Germany accepts this responsibility.” This type of sincere sentiment—an acknowledgment of responsibility for the unparalleled attack on the Jews, as well as the need for vigilance that it never happens again—is a hallmark of Merkel’s approach to Israel. Such humility and understanding of the deep wounds that Germany’s wretched past inflicted on the Jews are appreciated in Israel.

Ties between Israel and Germany were only restored in 1965. When West German emissary Rolf Pauls came to Jerusalem to man his post, rioting broke out in the streets; rocks and bottles were thrown at his car. Many Israeli leaders lobbied hard against any establishment of relations. In debating the potential ties at the Knesset, Menachem Begin famously stated that there should be “neither absolution nor forgiveness, and no normal relations will ever be possible between us.” There are still many in Israel who justifiably believe ties with Germany should have never been restored.

It wasn’t until 2008 that a German chancellor was allowed to speak at the Knesset. The landmark speech was one of Ms. Merkel’s most courageous actions during her tenure in office, and it did much to start to heal the animosity between Germany and Israel. At the time, Watch Jerusalem editor in chief Gerald Flurry called her address the “most significant speech made by a German leader since World War ii.”

“In speaking about the German atrocities committed against the Jews during the war,” Mr. Flurry wrote, “she made the statement that some people have been waiting to hear for over 60 years.”

This was that statement:

The mass murder of 6 million Jews, carried out in the name of Germany, has brought indescribable suffering to the Jewish people, Europe and the entire world. The Shoah fills us Germans with shame. I bow my head before the victims. I bow before the survivors and before all those who helped them so they could survive.

Such a statement from Germany’s leader should have grabbed world headlines, Mr. Flurry wrote at the time: “I personally have never heard such a repentant statement from a powerful world leader in my life.” And yet the speech didn’t garner that much traction outside Israel.

While Israelis generally admired and appreciated Merkel’s speech, others wondered whether her contrition represented just her personal views or that of the German nation.

The day following Merkel’s Knesset speech, a Jerusalem Post column appeared, titled “What Angela Merkel Couldn’t Say Out Loud.” Manfred Gerstenfeld wrote, “Few in Israel realize that a majority of Germans probably disagree with several key statements she made here about her country’s past—including the mention of shame and guilt” (emphasis added).

Instead of following Ms. Merkel’s courageous leadership at expressing shame for Germany’s slaughter of the Jews, many Germans have become increasingly ashamed of her repentance before the Jews.

In 2008, it’s likely that Merkel understood she was leading from the front to turn German hearts to repentance for the Holocaust. In the same Knesset speech, she sounded almost like a prophet, declaring it was critical for Germans to internalize their culpability in the Holocaust: “Ladies and gentlemen, I most firmly believe that only if Germany accepts its enduring responsibility for the moral disaster in its history will we be able to build a humane future.” Put another way, you could say, Unless Germans accept their responsibility in the Holocaust, another inhumane Germany will soon resurface.

Merkel then got very specific:

How, for example do we react when the atrocities of the Nazis are played down? There can only be one response. Every attempt to trivialize these atrocities must be nipped in the bud. Anti-Semitism, racism and xenophobia must never be allowed to gain a foothold in Germany or Europe again, because otherwise all of us—German society as a whole, the European community, the democratic foundations of our countries—would be placed in jeopardy.

Unless Germans repent for the Holocaust and unless anti-Semitism is stamped out in Europe, Merkel said, history would repeat itself.

These were bold warnings from a courageous leader from a decade ago. Yet recent history shows that Germany failed to heed its chancellor’s warning.

We noted this week the alarming rise in anti-Semitism in Germany. Last year, Germany experienced the highest number of anti-Semitic crimes since record-keeping began in 2001, amounting to 2,275 separate acts, an average of six per day. The German federal government reported in August that 2020 experienced 580 anti-Semitic crimes in the East German states—a drastic increase over previous years. In April, the Berlin Research and Information Center on Anti-Semitism reported that the city had experienced a 13 percent rise in anti-Semitic incidents in 2020 compared to 2019. In February, it was reported that the police had identified 1,367 anti-Semitic suspects from 2020, but only five had been arrested. According to a 2020 Civey survey, 33.5 percent of Germans believe their nation’s handling of Nazi crimes is “exaggerated.”

We then detailed several recent publicized stories of anti-Semitism in Germany. On September 30, an Israeli soccer team played at the Berlins Olympiastadion for the first time. The game was meant to be a show of reconciliation. Instead, an Israeli flag was burned, a man was arrested for a Nazi salute, and Israeli fans received threats and insults. On October 4 , German-Jewish musician Gil Ofarim was refused service at a luxury hotel in Leipzig until he took off his Star of David necklace. Then a few days later, Holocaust deniers vandalized nine barracks at Auschwitz-Birkenau, spray-painting racial epithets and slogans against the Jews at one of the principal places where Germany attempted to enact the final solution.

Witnessed together, these examples reveal a trend toward more anti-Semitism and less accountability for Nazi atrocities. They show that for all of Merkel’s warnings, Germany has failed to follow her example. And as Merkel leaves office, it’s very likely the next German leader won’t cultivate the same “culture of remembrance” Israel has enjoyed from this chancellor.

As Mr. Flurry wrote following her 2008 speech, the Nazi spirit has already been very much alive in Germany. “I think that Angela Merkel’s address in the Knesset was a moment of greatness for her,” he wrote. “But her view will not prevail in Europe!”

How did Mr. Flurry know that Germany would not follow the courageous example of Chancellor Merkel? Recent history has shown that Germany failed to fully take responsibility for the Holocaust. Bible prophecy also clearly reveals that German society will continue to give power to the spirit of anti-Semitism and will once again attempt to do the very thing Merkel warned against.

Thankfully, the Bible also shows this will be the final resurrection of a European power that seeks to destroy Israel, after which the scourge of anti-Semitism will be finally routed from mankind forever.

As Ms. Merkel completes her final days in office, Germany is starting to contemplate life without its calming leader. Israelis are wondering what will come of the German-Israel relationship. Bible prophecy contains the answers. To understand where German-Israel ties are headed, as well as appreciate Ms. Merkel’s courageous, decades-long warning against anti-Semitism in Germany, consider reading Mr. Flurry’s 2008 article “Angela Merkel’s Historic Holocaust Speech.”

Related
The Holy Roman Empire in Prophecy
The Holy Roman Empire has made pivotal and defining contributions to Western civilization-but its many reincarnations have also come with painful and catastrophic consequences. European leaders aim to unite the fractured continent of Europe by reviving the legacy of this extraordinary church-state combine. One of the great lessons of this empire is that it always comes back. There is always another resurrection. The Holy Roman Empire is not just a relic of history. It is about to play a central role in world events. Coming to understand about the nature and character of this powerful institution tells you as much about the future as it does about the past.
Request Now