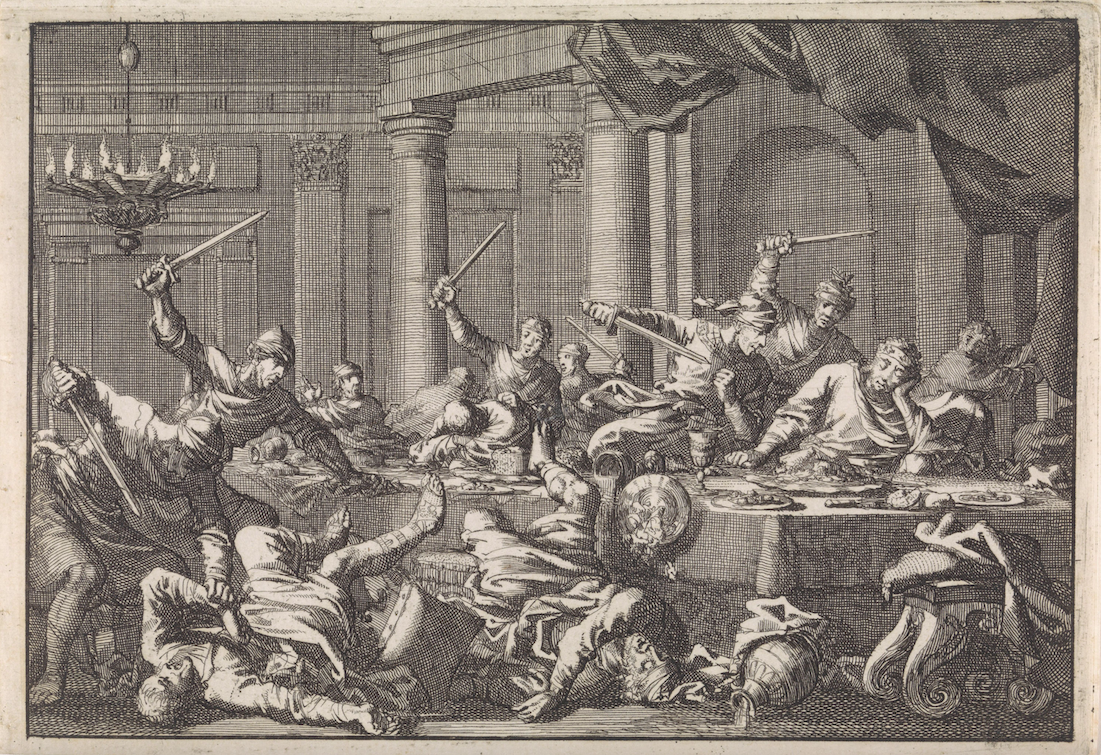 Gedaliah is murdered by Ishmael at the behest of Baalis, king of Ammon (Jan Luyken, 1704, Rijksmuseum).
www.rijkmuseum.nl

Comparatively little is known from archaeology about the Ammonites (the descendants of Ammon—not the prehistoric marine molluscs). In roughly a millennium of their history, only 10 rulers are known to archaeology. As for the Bible, a total of four are named (and one other unnamed).

For one of those kings, the archaeological record has turned up corroboratory evidence—twice.

Baalis is a king of Ammon mentioned in only one Bible verse—but a verse packed with intrigue.

The biblical setting is just after Jerusalem has fallen to the Babylonians, around 586 b.c.e. Following the destruction, capture of King Zedekiah, and deportation of much of the Jewish population, Babylon’s King Nebuchadnezzar set up Gedaliah ben Ahikam as “governor” of the remaining people in the land (Jeremiah 40:7). Under his governorship in subservience to Babylon, there was a certain period of peace and stability.

However, “word on the street” was that there was a hit put out on Gedaliah. His faithful captain Johanan warned him, “Dost thou know that Baalis the king of the children of Ammon hath sent Ishmael the son of Nethaniah to take thy life?” (verse 14).

Gedaliah, however, ignored the warning of his captain—and he and 70 others wound up brutally murdered by Ishmael and his men (Jeremiah 41). This spelled the beginning of disaster for the remaining Jews in the land.

The Baalis Seal, a remarkable agate seal inscribed with the name of a biblical Ammonite king who had the Jewish governor Gedaliah assassinated (Jeremiah 40:14) pic.twitter.com/LecNwS5F7B

Ishmael took a throng of Jews captive (including King Zedekiah’s daughters), and attempted to drive them into the land of Ammon to become slaves; he was subsequently pursued and overpowered by Johanan and his forces, narrowly escaping into Ammon with his life. However, the success of Johanan’s relief effort was short-lived: By returning with the freed Jews, Johanan deliberately rejected the counsel of the Prophet Jeremiah to stay in the land of Judah. Instead, he shepherded the Jews in a reverse “Exodus” into the land of Egypt, where another mass-casualty event took place (described in chapters 42-44).

It’s a remarkable story (and the heady dialogue in chapters 42-44 is incredibly dramatic). And it was likewise stunning when, in 1985, a seal stamp was revealed bearing the name of the king at the center of Ishmael’s plot.

In 1984, during excavations at the Jordanian site Tell el-’Umeiri by Andrews University—deep in the heart of ancient Ammonite territory, near the Jordanian capital Amman (which itself derives its name from Ammon)—excavators uncovered a bulla (clay seal stamp). The bulla was inscribed with Ammonite script, similar to (but yet readily discernable from) the ancient Israelite script, reading Belonging to Milcom-Or, Servant of Baalisa.

With a script fitting to the period in question, this constituted the first emerging evidence for this biblical monarch of Ammon—albeit with a typically slightly different Ammonite spelling of the name Baalis, Baalisa. Milcom itself is another name famously associated with the Ammonites in the Bible; namely, that of their god before whom grotesque child sacrifices took place (i.e. 1 Kings 11:5—some of the strongest language is used in condemnation of the worship of this god). With a name ironically meaning “light of Milcom,” the Milcom-Or bulla was found among evidence of a large administrative complex—apparently part of an expansive building program instituted by Baalisa (and perhaps the reason for the attempt by his paid assassin, Ishmael, to draw slaves into the territory).

Twenty-five years after its discovery, another related artifact was revealed. In a 1999 Biblical Archaeology Review article, Dr. Robert Deutsch announced a seal that had come to light from a private collection. The beautiful yet slightly damaged three-register agate seal, similar in layout to Milcom-Or’s, was decorated with an Ammonite-style sphinx. The royal Ammonite inscription reads: Baalis[a], King of B[ne Ammo]n.

While significant damage is present in the bottom register, the identity of the seal’s owner is clear, based on his personal name, motifs and the form of the script. Further, the necessary three letters to complete “Bne Ammon” fit perfectly with the space available.

It appears this title goes back to the original account of the birth of the nation’s founder, as described in Genesis 19:36-38. Rather than the two boys in this passage being named Moab and Ammon, the latter’s name was actually Ben-ammi—meaning “son of my people.” It seems a plural form of this name, Bne Ammon, stuck throughout history. While “Ammoni” [Ammonite] is sometimes used in the Bible, “Bne Ammon” is by far the most common form.

Thus, with the Baalis discoveries, we have our first evidence of a biblical king of Ammon (or rather, king of the children of Ammon), along with his servant Milcom-Or. Like many of his ancestors, he was an antagonist against the Jewish people, and as Jeremiah’s account brings out, the only one to successfully bring about the untimely demise of a Jewish ruler.

Ironic, for an individual whose Ammonite name means Baal saves. He certainly doesn’t.