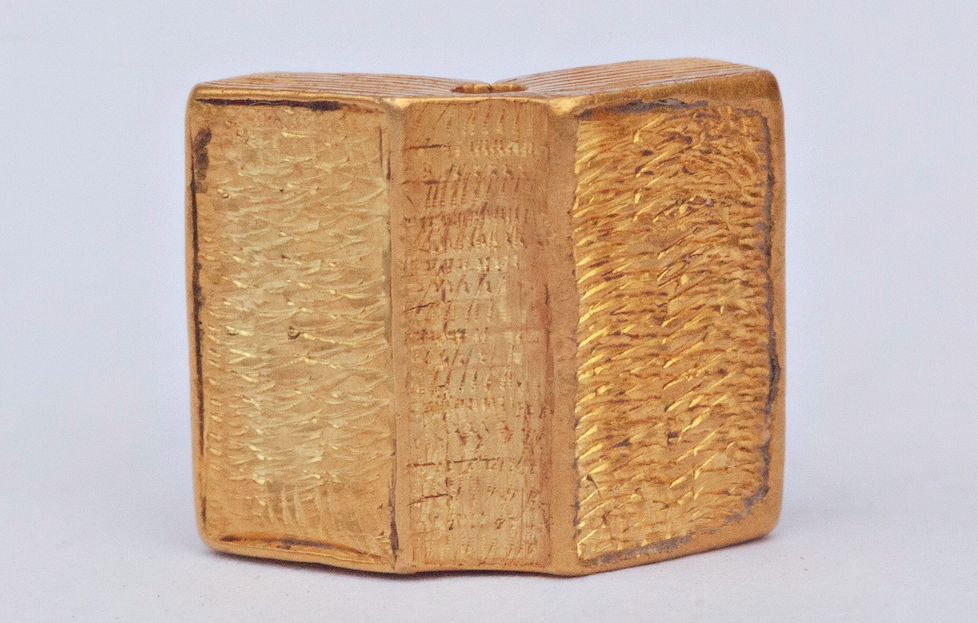 News broke early this month of a once-in-a-lifetime dream discovery for a metal detectorist in northern England: a centuries-old miniature Bible pendant, made of pure gold, and believed by researchers to have belonged to a relative of King Richard iii.

Nurse Buffy Bailey from Lancaster began metal detecting on farmland near Sheriff Hutton Castle (North Yorkshire) with her husband, Ian, when almost immediately her metal detector picked up a strong signal. “I dug down five inches and it was just there—I still didn’t believe it was anything special,” Mrs. Bailey said, initially believing it to have come from a gift shop.

It was only after cleaning the item that the significance of the heavy gold piece of jewelry began to be realized.

The artifact is currently being assessed by the Yorkshire Museum. It has been noted for its similarity in artistic style to the Middleham Jewel, an item associated with King Richard iii of England (1452–1485), and the similar engraving style has led to speculation it was created by the same artist. Further, the gold Bible was found on land near property owned by the king. Julian Evan-Hart, editor of Treasure Hunting magazine and an expert in rare treasure items, stated: “[S]umptuary law [of the 13th to 15th centuries] made it illegal for anyone other than the nobility to carry gold. Automatically, then, it would have been the possession of someone highly notable such as a member of royalty.”

The figures depicted on the “pages” are not actually personalities of either the Hebrew Bible or the New Testament; instead, they depict St. Leonard and St. Margaret, patron saints of childbirth. Ergo, the researchers believe that the pendant belonged to a pregnant relative of the king, perhaps specifically the king’s wife Anne Neville; her mother, Cecily Neville; or sister-in-law Anne Beauchamp. “Whoever had it commissioned must have been incredibly wealthy,” said Mrs. Bailey. The item weighs 5 grams, and is either 22 carat or 24 carat gold.

The possession of pregnancy charms at this time can be viewed in the context of a devoutly Catholic England, with a high percentage of women dying in pregnancy or from complications thereafter. Claire Ridgway on TudorSociety.com writes: “Sadly, more than one in three women died during their child-bearing years”—not to mention the high percentage of children who died before their second birthday (some 20 percent). Ridgway describes the symbolic importance of tokens such as the above, depicting St. Margaret: “St. Margaret was eaten by a dragon but spat out again due to the crucifix she had been holding. It was hoped that babies would be delivered as easily as St. Margaret had come out of the dragon”—hence the superstitious use of St. Margaret charms at the time by practicing Catholics such as the family of King Richard iii.

It’s a fantastic, dream-find that provides a snapshot into the life, worries and religion of 15th-century England—as, potentially, does the fact that it was buried. Matthew Lewis, chairman of the Richard iii Society, relates: “It is far too valuable an item to have simply been lost, so its owner may have buried it for the future at the time of the [later 16th century] Reformation when religious depictions were outlawed,” based on the biblical command against the creation and use of graven images in worship (as listed among the Ten Commandments; Exodus 20:4-6).

For more information about this discovery, check out Matthew Lewis’s interview with the finders, Buffy and Ian Bailey, on his podcast Gone Medieval here.