A special coin (produced at the temple itself?) found by a young sifting project volunteer
By Christopher Eames • November 29, 2021 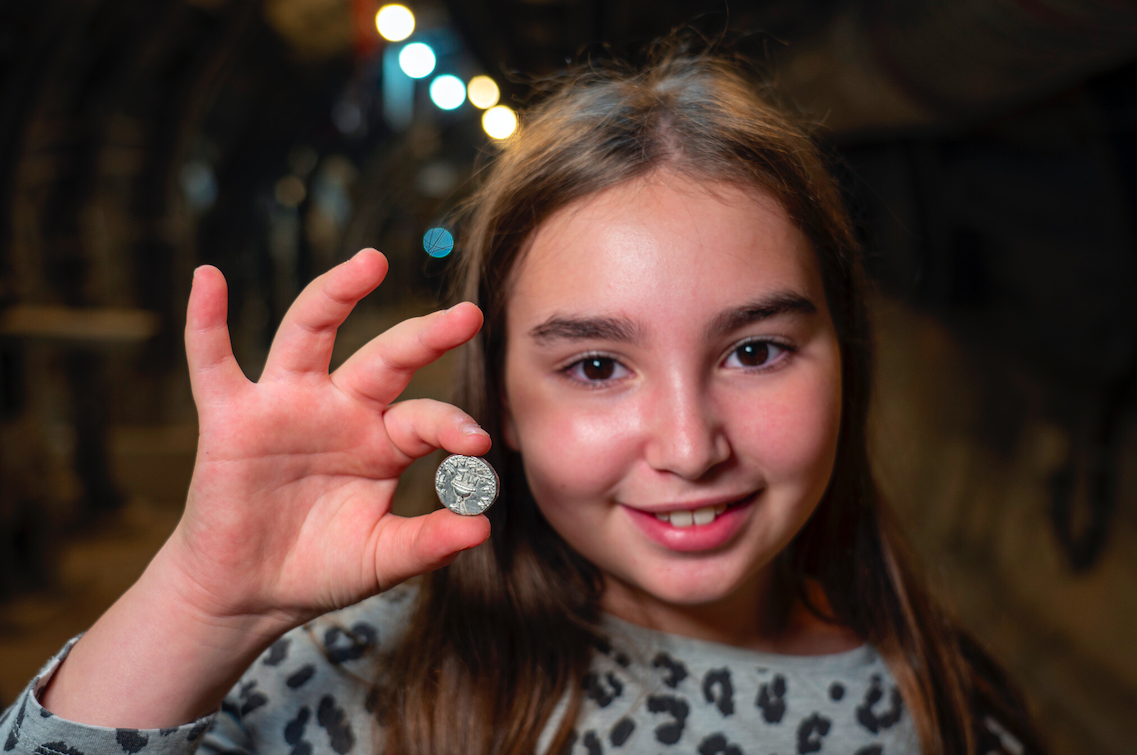 Nothing says “revolt” and “self-determination” like the creation of one’s own coins. Such was the case with the coins of the Jewish Revolt (c.e. 66–70): Bronze coinage produced by the Jewish people in rebellion against Roman rule. The (sometimes-restamped Roman) coinage was decorated with religious Jewish symbols and ancient Hebrew script, the type used centuries before during the biblical kingdom of Judah. (Ultimately, the Jewish Revolt was crushed by the successful Roman invasion of Judea and the ultimate overthrow of Jerusalem.)

Recently, while volunteering at the City of David National Park’s sifting project, 11-year-old Liel Krutokop discovered another coin from this period of upheaval in her sifting tray. But this one is far more special.

The coin is labeled “Year Two” (of the Revolt)—unsurprising, as most of the Revolt coins found are from this year (c.e. 67–68). But this coin is silver. “This is a rare find,” said Dr. Robert Kool, head of the Israel Antiquities Authority’s coin department. “Out of many thousands of coins discovered to date in archeological excavations, only about 30 coins are made of silver, from the period of the Great Revolt.”

Dr. Kool further noted the probability that the silver coin was minted in the temple complex, since the temple was the prime treasury of silver in Israel. Silver and other treasure were so plenteous here, the treasury so great, that the victorious Roman Emperor Vespasian built the Colosseum in Rome with the spoils of the war (as relayed, in part, by one of the Colosseum inscriptions). “Where else could you find silver in such quantity and such high quality in those days?” Dr. Kool asked. “Only in the temple. If so, we can say with caution that this coin is, apparently, one of the only items we hold today that originated on the temple itself.”

One side of the coin bears the image of a cup and the ancient Hebrew text “Israel Shekel, Year Two”; the other face has the words “Holy Jerusalem” and a depiction of pomegranates. (Other revolt coins typically read “For the Freedom of Zion”; Year Four coins, in a sign of desperation due to the besieged capital, read “For the Redemption of Zion.”)

It is apparent that the coin was used for trade, notably because it was unearthed from the “Pilgrim’s Road” thoroughfare, leading from the Siloam Pool to the Temple Mount—a strip that has revealed much evidence of trading, including various weights, measuring devices and other coins. Beyond this, though, its minting and weight—14 grams of silver—made it a rich and ceremonial coin in its own right.

And the discovery represents another of many precious artifacts being uncovered by some the youngest members of society in the land of their ancestors. Mazel tov!