Twin Treasure-Laden Shipwrecks Discovered Outside the Ancient Port of Caesarea 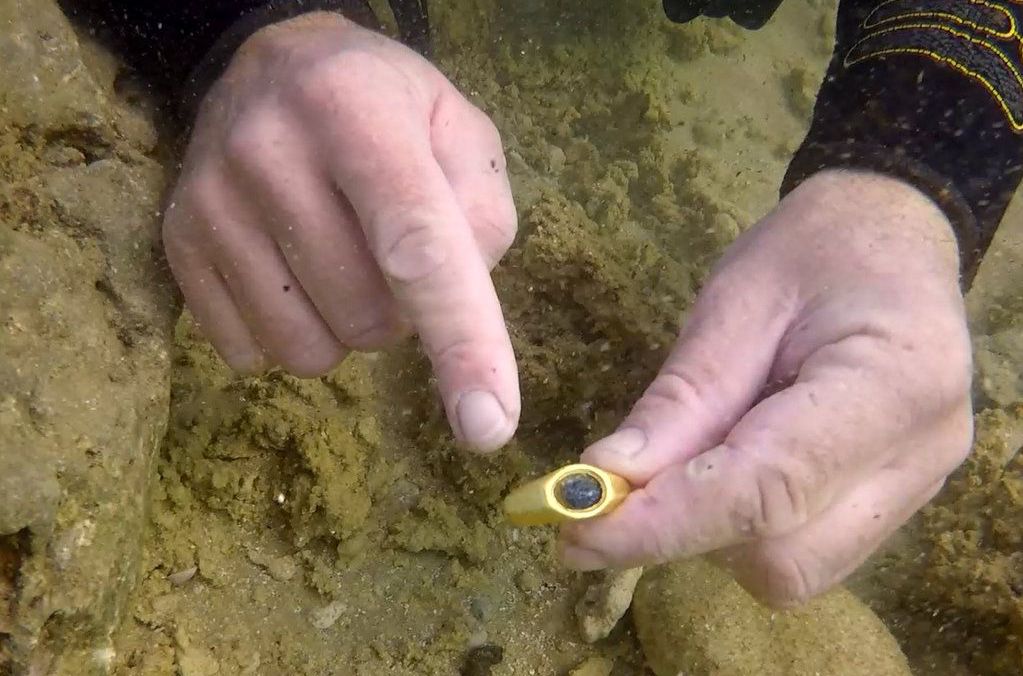 A marine archaeology survey off the coast of Caesarea, conducted by the Israel Antiquities Authority, has unveiled a surprise discovery: two shipwrecks, just outside the ancient Caesarea port, filled with treasure.

The shipwrecks, though not far from one another, are from completely different periods with cargo reflecting completely different political and religious situations. One wreck dates to the Roman period, over 1,700 years ago. It contains hundreds of silver and bronze Roman coins, as well as pagan Roman statues and figurines (such as the familiar legionary Roman eagle). The second shipwreck is from the Mamluk (Muslim “knights”) period, dating to over 600 years ago; it contains some 560 silver coins. Both shipwrecks were found in shallow water, at a depth of only four meters, their treasures scattered across the seafloor.

Two especially fine discoveries (almost miraculous, given their small size) were in the form of ring inlays. One red gemstone (pictured above) depicts an engraved image of handheld lyre, in style similar to the Jewish “harp of David” (such as the one displayed at the entrance gate of the City of David)—a potential nod to the famous king’s legendary skill on the instrument and its familiarity in the region.

According to Jacob Sharvit and Dror Planer (of the Israel Antiquities Authority’s Marine Archaeology Unit): “The ships were probably anchored nearby and were wrecked by a storm. They may have been anchored offshore after getting into difficulty, or fearing stormy weather, because sailors know well that mooring in shallow, open water outside of a port is dangerous and prone to disaster.” Indeed, a large iron anchor was discovered that had been snapped apparently by the sheer force of a storm faced by one of the ships’ crews. “The finds reveal the story of two ships that sank with all hands in different periods, apparently while attempting to maneuver the vessels into port.” Both the Hebrew Bible and New Testament contain references to ferocious storms and shipwrecks in and around this region of the Mediterranean Sea—notable examples include that of Jonah and the Apostle Paul.

Caesarea Maritima was originally built by the infamous King Herod in the late first century b.c.e., so named in honor of the Roman emperor Caesar Augustus. As one of the finest ports in the ancient world, it was extremely modernized and opulent, complete with a decadent city, palace jutting out into the sea, temples to Augustus and Rome, and a “hippodrome” arena hosting regular gladiator games. The city and port were built in the area of a previous Phoenician trade location known as Straton’s Tower. By the time of the Mamluk period (in 1265), the port city was “slighted” (meaning deliberately destroyed as a defensive measure).

They are extremely vulnerable, which is why the Israel Antiquities Authority conducts underwater surveys to locate, monitor and salvage any antiquities. There are many kinds of sporting activities along Israel’s shores, including diving, snorkeling, open water swimming and sailing, during which antiquities are occasionally discovered. We appeal to divers: If you come across an ancient find, take a note of its underwater location, leave it in the sea, and report it to us immediately. The discovery and documentation of artifacts at their original find spot has tremendous archaeological importance and sometimes even a small find leads to a great discovery.

Archaeology is an important field of study in Israel, but less spotlighted are the efforts of marine archaeologists. This fantastic dual shipwreck discovery highlights a very important niche field and how some of the richest and most incredible discoveries can come from beneath the waves.