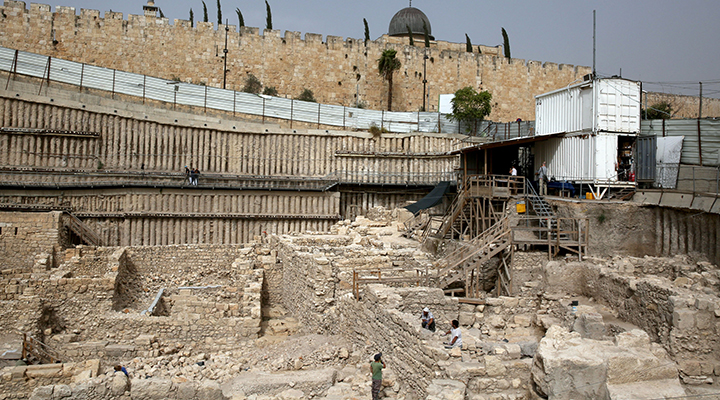 Workers from the Israeli Antiquity Authorities dig on November 3 at an excavation site near the City of David adjacent to Jerusalem’s Old City walls where researchers believe to have found the remains of the stronghold the Akra, from which the Greek King Antiochus IV was able to control Jerusalem.
GALI TIBBON/AFP/Getty Images

In November 2015, the Israel Antiquities Authority (IAA) sent a news brief to reporters in Jerusalem, calling for a press conference the following day to announce the “solution to one of the greatest questions in the history of Jerusalem.”

The announcement did not disappoint: On site, in Jerusalem’s City of David, archaeologist Doron Ben-Ami announced that the famed Akra (citadel) of Antiochus Epiphanes had been discovered.

Up until that announcement, little had been found testifying to the massive Hellenistic intrusion into the city early in the second century B.C. Yet here, at the northwestern portion of the City of David, a massive section of a city wall from that very period was found under layers and layers of construction from later civilizations.

Along with the city wall, the base of a fortification tower was unearthed, having a width of over 12 feet and a length of over 60 feet. Attached to the lower portion of the wall was a sloped embankment known as a glacis. This was made up of layers of soil, stone and plaster designed to keep attackers away from the base of the wall, a key feature of a defensive city wall. According to the press release from the IAA, this glacis extended as far down as the bottom of the Tyropoeon valley, the depression on the western part of the ancient city.

Around the massive wall, lead slingstones typical of Antiochus’s army were discovered, as well as bronze arrowheads featuring a trident symbol on them—the mark associated with Epiphanes. Further corroborating the dating of the wall were a number of coins, the earliest of which dates to the time of Antiochus Epiphanes. On top of that, hundreds of pottery handles impressed with markings from Rhodes that were used for wine vessels were also discovered, testifying to the Hellenistic nature of the fortress’s inhabitants.

While one can rarely be 100 percent sure of the identification of such a site, the evidence certainly does support the conclusion that this building is indeed the famed Akra.

Following an unsuccessful bid to conquer the Ptolemaic kingdom in Egypt in 168 B.C., Antiochus IV (Epiphanes) ventured back to Judea and unleashed one of history’s most atrocious anti-Semitic attacks on the fledgling province of Judea. He ransacked the capital city of Jerusalem, sacrificed swine flesh on the altar of sacrifice in the temple courtyard, and then set up a statue of Jupiter in the holy of holies. Afterward, he ravished the countryside in order to destroy any vestige of the Holy Scriptures he could find, as well as killing those who would not comply with his decrees.

Then, in order to ensure the Jews didn’t rebel, he constructed a massive fortress in the northern part of the City of David and stationed a permanent garrison of his troops there.

This famed building stood for the next quarter of a century, a constant affront to the Jews as it sat adjacent to the temple. Even after the Maccabean revolt against Antiochus Epiphanes was successful at reclaiming Jerusalem in 165 B.C., the Jews still could not take the citadel. In fact, for the next 20-plus years, long after the death of Antiochus Epiphanes in Babylon, a garrison of Seleucid troops continued to be stationed in the Akra, constantly hounding those visiting the temple grounds.

As Flavius Josephus relates in Antiquities of the Jews:

[A]nd when he had overthrown the city walls, he built a citadel [Greek: Acra] in the lower part of the city, for the place was high, and overlooked the temple; on which account he fortified it with high walls and towers, and put into it a garrison of Macedonians. However, in that citadel dwelt the impious and wicked part of the multitude from whom it proved that the citizens suffered many and sore calamities.

It was only after Simon, the elder brother of Judas, came into power over the new, restored Jewish state in 142 B.C., that the Seleucid forces were finally ousted from the Akra a year later. Then, to ensure that foreigners would never again hold captive the religious practice of the Jews, Josephus records that Simon led a three-year, night-and-day effort to destroy the Akra completely, even grinding down part of the ground it rested upon.

How could these excavators find evidence of the Akra if Simon destroyed it? Possibly it was because they were digging in the very western reaches of the Akra, which would have been the lowest portion of the hill, far from the crest of the City of David to the east.

No doubt, many scholars will disagree with the identification of this large Hellenistic building as the Akra because it is so far from the Temple Mount. However, an unbiased look at the historical record of the Akra, in line with the limited evidence presented by Doron and his team, presents a solid case for this identification as the fortress of Antiochus Epiphanes. Hopefully more of the building can be discovered in the future.

This article was originally published in 2015, following the discovery