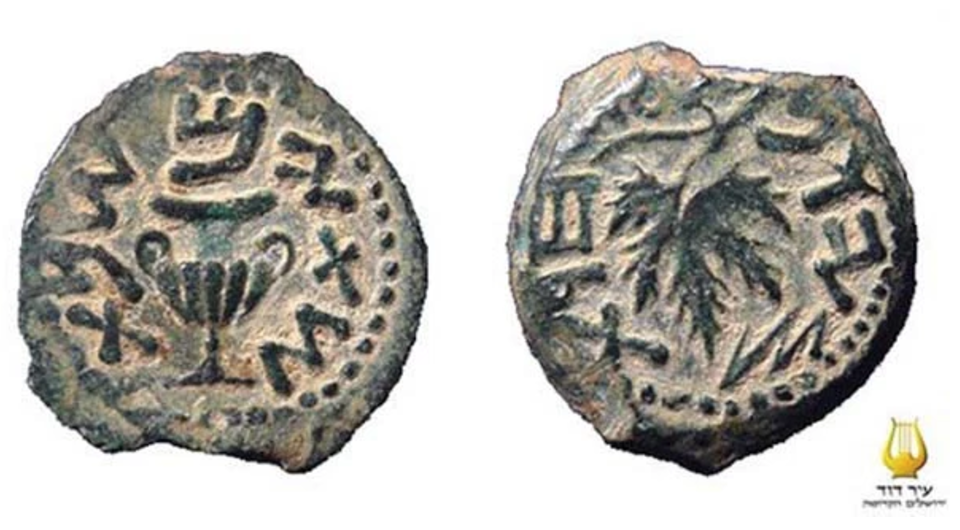 JERUSALEM – At a cabinet meeting on Sunday, Israeli Prime Minister Benjamin Netanyahu was presented with a recently discovered Roman-era coin from Minister of Culture Miri Regev. Dating to the time of the Jewish revolt against the Romans, the coin bears the words “Freedom of Zion” on one side, and “Year Two” (of the Great Revolt—67 AD) on the other. At the cabinet meeting, Minister Regev said :

I thought it would be a festive and exciting present to give you the coin that was found in the Old City two weeks ago. This coin, Prime Minister and my colleagues, belongs to a series of coins minted during the Great Revolt against the Romans which have previously been found in various places. On one side of the coin there is a vine with Hebrew letters—“Freedom of Zion,” and on the other side, an omer cup. To me, this shows the close and unbroken link of the history of the Jewish People to Jerusalem, our eternal capital.

The coin’s discovery comes as Israel gears up for the 50-year anniversary of the reunification of Jerusalem after the 1967 Six Day War (interestingly, the coin was minted exactly 1,900 years before this date). 2017 will also mark 120 years since the first Zionist Conference in Basel, Switzerland; 100 years since the Balfour Declaration (announcing British support for Palestine to become a Jewish homeland); and 40 years since Egyptian President Anwar Sadat visited Jerusalem, extending a remarkable offer of peace between the two countries.

In accepting the coin, and commenting on attempts to reject the Jewish historical attachment to the land, Netanyahu remarked:

The discovery of the coin, as well as a host of other artifacts prove, without a doubt, the longstanding Jewish presence in Jerusalem.