Our world is teetering on the brink of nuclear devastation. But there is great cause for hope!
By Gerald Flurry • August 13, 2017 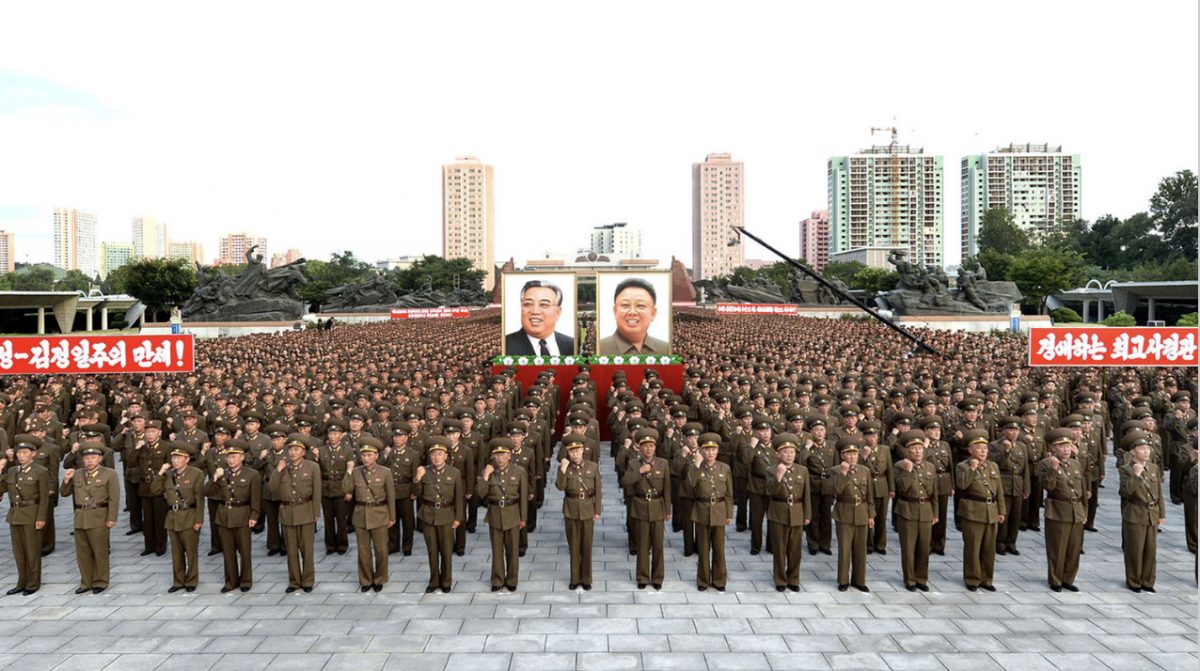 Service personnel of the Ministry of People’s Armed Forces at a rally in support of North Korea’s stance against the U.S.
STR/AFP/GETTY IMAGES

News headlines today are proof that this world is full of hopelessness. Apart from God, we humans are beset by problems. That is why so many people are disturbed, anxious, fearful and hopeless.

As world events continue to become more terrifying, man’s problems will only get worse. North Korean Supreme Leader Kim Jong-un is a madman with access to an intercontinental ballistic missile mounted on a mobile launcher. It is nearly impossible to track where this missile will launch from! All that’s missing is a warhead to attach to the missile.

The United States is Kim’s archenemy, which is why he launched an icbm into the Sea of Japan on July 4, America’s Independence Day.

“Across 25 years and five administrations, we have kicked the North Korean can down the road,” Charles Krauthammer wrote for the Washington Post on July 6. “We are now out of road.”

We are facing a nuclear problem that will soon transform into a nuclear nightmare! Russian President Vladimir Putin has a ballistic missile called Satan 2 that could destroy the United Kingdom, France or Texas. It is expected to be ready for use next year.

According to intelligence reports, North Korea is helping Iran with its nuclear program. Iranian Supreme Leader Ayatollah Ali Khamenei also considers America his number one enemy. Even more worrying, he believes that the 12th imam, a perverted version of the Messiah, will return sooner if his rogue nation can create unrest and violence around the world.

These are madmen with nuclear weapons—we can’t just push them aside and pretend they aren’t a grave threat!

On Iran’s ballistic missiles is inscribed the threat, “Israel must be wiped out.” But in his speech to the United States Congress in 2015, Israeli Prime Minister Benjamin Netanyahu said that Iran is not just a Jewish problem. Likewise, the Nazis were not just a Jewish problem. They killed 6 million Jews, but 60 million people died in World War II! In the next world war, billions will die! That’s hard to even fathom. No wonder our nation’s young people are plagued by anxiety!

If you think Iran is dangerous now, how dangerous will it be when it obtains nuclear weapons?

China is building military bases on its artificial islands in the South China Sea, through which $5 trillion in annual trade passes. If you control trade, you control nations. China and other nations are building up this kind of power because they want to rule the world

Another nuclear power that often goes unnoticed is the European Union, which will become the seventh resurrection of the Holy Roman Empire very soon. To the surprise of many, this bloc of nations will cause the most destruction of all. Germany dominates Europe today. That nation started the first two world wars. It will cause a third before the Messiah comes. God wants the world to learn a lesson. (Please read out book Jerusalem in Prophecy to understand God’s timeline)

It is so hard for human beings to submit to God. Your Bible describes the world becoming a wasteland. That’s what it will take to finally wake people up! We all go through trials and tests as we learn to obey God, but we shouldn’t need to experience nuclear holocaust!

Russia has stolen territory from Ukraine. It has taken over leadership in Syria and much of the Middle East at America’s urging. I could write for years about these rising Gentile powers. Where is the hope?

Bible prophecy is being fulfilled at a rapid pace, without delay!

“The prophet which prophesieth of peace, when the word of the prophet shall come to pass, then shall the prophet be known, that the Lord hath truly sent him” (Jeremiah 28:9). The same is true of the prophet who warns of nuclear annihilation! We can know a true prophet by the accuracy of his prophecy.

The number one problem we face today is that of human survival. Why don’t news commentators discuss this more? How can we survive without God’s intervention? God lets us go our own way to prove that we cannot adequately rule ourselves!

The book of Daniel discusses four world-ruling empires of man, from Babylon to Persia to Greece to Rome. The seventh and final resurrection of the Holy Roman Empire is represented by 10 toes, symbolizing 10 European nations ruled by a great false church. This is end-time prophecy! (Daniel 12:4, 9).

Otto von Habsburg, a former member of the European Parliament, said, “The European Community is living largely by the heritage of the Holy Roman Empire, though the great majority of the people who live by it don’t know by what heritage they live.” He also said, “We possess a European symbol, which belongs to all nations of Europe equally. This is the crown of the Holy Roman Empire, which embodies the tradition of Charlemagne.”

Charlemagne led the First Reich. Adolf Hitler led the Third Reich! Charlemagne waded through rivers of blood to convert people to his religion. Germany has been in the grip of the Holy Roman Empire repeatedly, causing mankind great misery.

“And in the days of these kings shall the God of heaven set up a kingdom, which shall never be destroyed: and the kingdom shall not be left to other people, but it shall break in pieces and consume all these kingdoms, and it shall stand for ever” (Daniel 2:44).

“In the days of these kings” gives us the time frame. During the last resurrection of the Holy Roman Empire, which is almost here, the Messiah will come and set up His Kingdom! He will smash the Holy Roman Empire and rule forever. The most high God rules in the kingdoms of men! (Daniel 4:17). He is in charge of the Gentile powers rising today. They can do nothing unless He allows it.

God’s Kingdom “shall not be left to other people.” No longer will humans suffer under carnal tyrants! Only perfect God beings will administer God’s government on Earth. God is developing these leaders today. We will be kings and priests forever, ruling with God from His throne. What reward could possibly be better than that?

This is the living hope Bible prophecy.