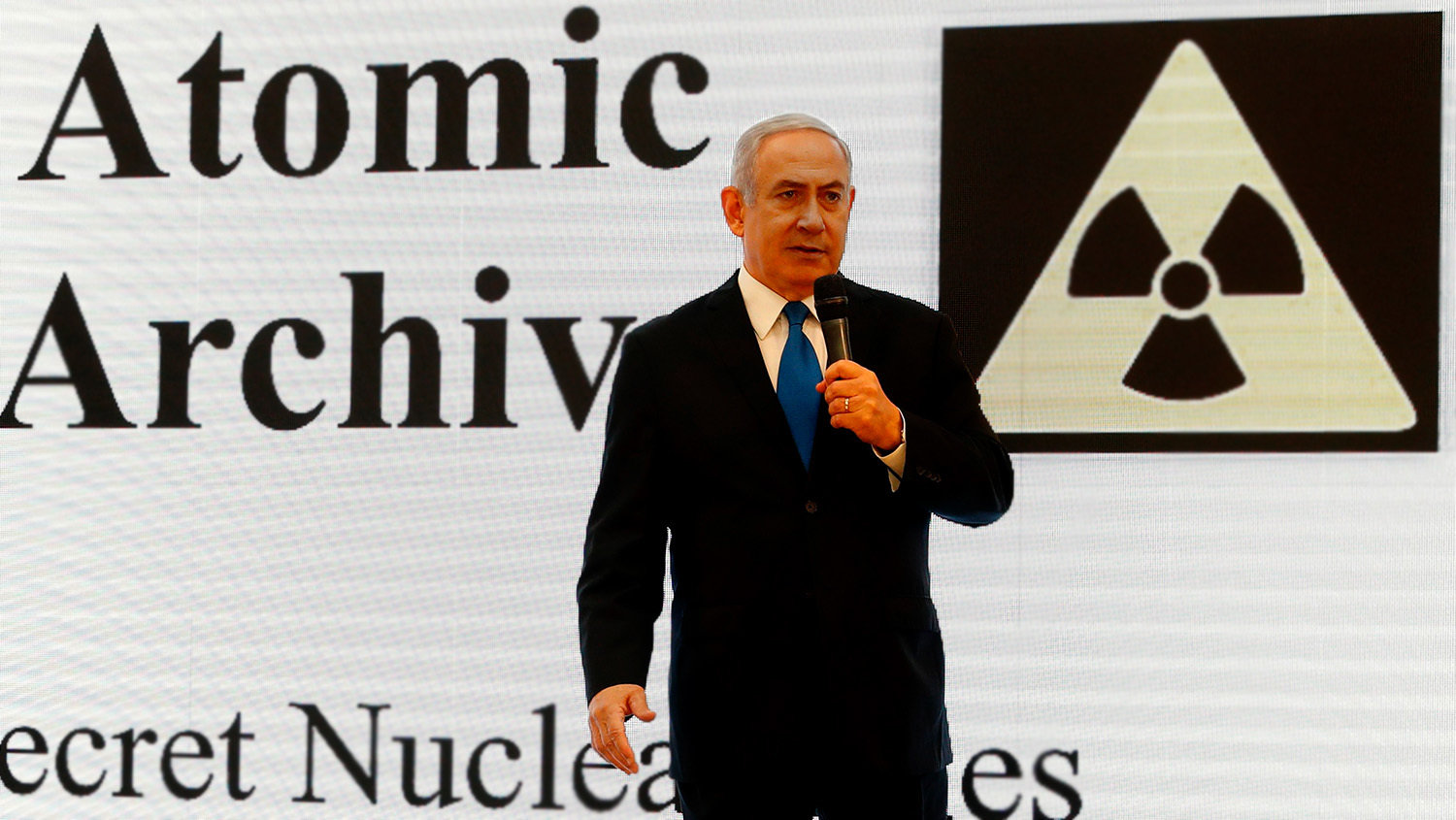 Iran lied. This is the message Israeli Prime Minister Benjamin Netanyahu announced Monday at a press conference in Tel Aviv.

In his presentation, Netanyahu revealed a captured “atomic archive” of Iranian nuclear weapons information. The incriminating archive shows just how close Iran is to creating weapons of mass destruction. It also shows another fundamental flaw in the embattled nuclear deal with Iran.

“A few weeks ago,” according to Netanyahu, Israel obtained half a ton of information from secret Iranian safes. The stash of 100,000 files was hidden in a warehouse in Tehran. It included 55,000 pages of documents and 183 cds.

These files reveal a top-secret Iranian nuclear development program that ran from 1999 to 2003, code-named “Amad.” Netanyahu said that Amad’s “mission statement [was] to design, produce and test five warheads with 10 kiloton of tnt yield for integration on missiles.”

He presented the captured documents as proof of Iran’s desire to become a nuclear power.

According to The Israel Project, there were four key takeaways from Netanyahu’s speech: “Iran lied about having a nuclear weapons program, it continued to expand its knowledge of nuclear weapons work after the deal, it failed to come clean about its past work in 2015, and the deal is based on lies.”

Skeptics have criticized the prime minister, saying there was nothing new in his presentation other than the fact that Iran moved the store of information in 2017. But with so many documents, more revelations could be forthcoming. Netanyahu has already shared the atomic archive with a number of nations, while hinting that there may be more to come.

Critics are calling the announcement an attempt to persuade United States President Donald Trump to end the Iran nuclear deal. The timing is not coincidental. On May 12, the president must decide whether or not to reimpose sanctions on Iran. The colossal shortcomings of the Joint Comprehensive Plan of Action (JCPOA) have not gone unnoticed by the president, who has openly criticized the deal. The condemning information uncovered by Mossad agents could be the motivation Mr. Trump needs to end it.

This is what Netanyahu was hoping to push America to do with his announcement. However, the U.S. president remains cagey about his intentions, telling the press that he is “not telling” what he plans to do on May 12. President Trump spoke with Prime Minister Netanyahu before the April 30 conference, and Israel shared the documents with the U.S. before the conference. America even authenticated them, according to Mr. Netanyahu.

Others may take more convincing. In a surprise move, Netanyahu’s office announced that it “will send in the coming days professional teams that will share with Germany and France the detailed material Israel obtained on Iran’s efforts to obtain a nuclear weapon.” Netanyahu has spoken with Russian President Vladimir Putin and signaled his intent to speak with the Chinese and British. These nations make up the P5+1—the five permanent members of the United Nations Security Council, plus Germany. They are the ones who sat at the negotiating table and signed the deal that gave terror-sponsoring Iran billions of dollars. Israel hopes to convince them that they should scrap the deal because Iran has not kept its promises.

But here is the sad truth: These leaders already knew that Iran was lying—even when they agreed on the JCPOA. There may be new evidence, but it only reinforces what these governments knew. Iran’s leaders want a nuclear weapon, and they are quite willing to lie to get it. Looking objectively at Iran—in 2003, 2015 or today—there is no way to deny knowledge of its nuclear ambitions.

Netanyahu said during his presentation, “Iran did not come clean about its nuclear program.” Yes, some details were hidden, but would that have made any difference in 2015?

Consider how much information the world did know about Iran’s nuclear program back then—the things that Iran wasn’t trying to hide. Iran’s fuel enrichment plant at Fordow wasn’t hidden in 2015. Neither was the plutonium-producing, heavy-water facility at Arak. Iran was openly testing ballistic missiles and violating international sanctions even then. Iranian leaders regularly and openly called for the destruction of the West. The muftis were still praying for the 12th imam to come—an event that they say requires faithful Muslims to create worldwide chaos and destruction!

In fact, all these things are still happening today. Iran still spins centrifuges. It still cloaks its nuclear facilities in secrecy. It still leads the world in sponsoring international terrorism.

Did any of this stop the P5+1 nations from signing off on the worst deal in history?

In fact, even after Netanyahu’s presentation, French President Emmanuel Macron and German Chancellor Angela Merkel called for the deal to be upheld! These administrations knew Iran was lying in 2015. They know it is lying today. So does the mainstream media. But as always with Iran, appeasement trumps confrontation.

So Iran is still free to operate without the burden of additional sanctions. Meanwhile, the Amad project is shelved but not forgotten. It waits for the day that Tehran decides the time has come to finish a project that has been rooted in the religion, policy and psyche of radical Islamic Iran since the days of the 1979 revolution.

At a press conference 30 minutes after Netanyahu’s presentation, President Trump said that the speech “showed that I was 100 percent right” for condemning the JCPOA. He isn’t the only one who has condemned it, however. In fact, he was far from the first. We have warned for decades about Iran’s rise and eventual acquisition of nuclear weapons!

Look at what Watch Jerusalem editor in chief Gerald Flurry wrote in 2015 about the Iran nuclear deal and the likelihood that it would constrain Iran’s nuclear ambition. This was back when the JCPOA had just been formulated. The title of the article alone speaks volumes: “Negotiating Human Survival.” He wrote:

The P5+1 nations have negotiated a nuclear deal with Iran. Many people are elated. But there should be no celebration. What is at stake is nothing less than human survival. We needed something that would pull us away from that brink, but this deal did just the opposite. …

Many people are hailing the new nuclear agreement with Iran. But this whole deal hinges on trust. Can Iran be trusted? In the past two decades, Iran has broken, violated and lied about 20 agreements made with it. Do we think its behavior will change because of this agreement? Just days before the deal was signed, Iran’s president marched with a huge crowd of Iranians who were holding “Death to Israel” and “Death to America” signs.

Though many don’t realize it yet, the Western world—and especially America—has been humiliated through this deal. The Iranian reaction should be enough to trumpet that fact.

Isn’t that what we have seen in the past several years? Iran has flouted the rules of the nuclear deal again and again, even while claiming that it is doing the opposite.

In light of Netanyahu’s stunning yet largely unsurprising revelation, we suggest that you go back and read what Mr. Flurry wrote in “Negotiating Human Survival.” His article clearly shows where Iran’s nuclear program is leading, no matter what Prime Minister Netanyahu or President Trump have to say about it.