Evidence for the infamous biblical queen
By Christopher Eames • April 27, 2020 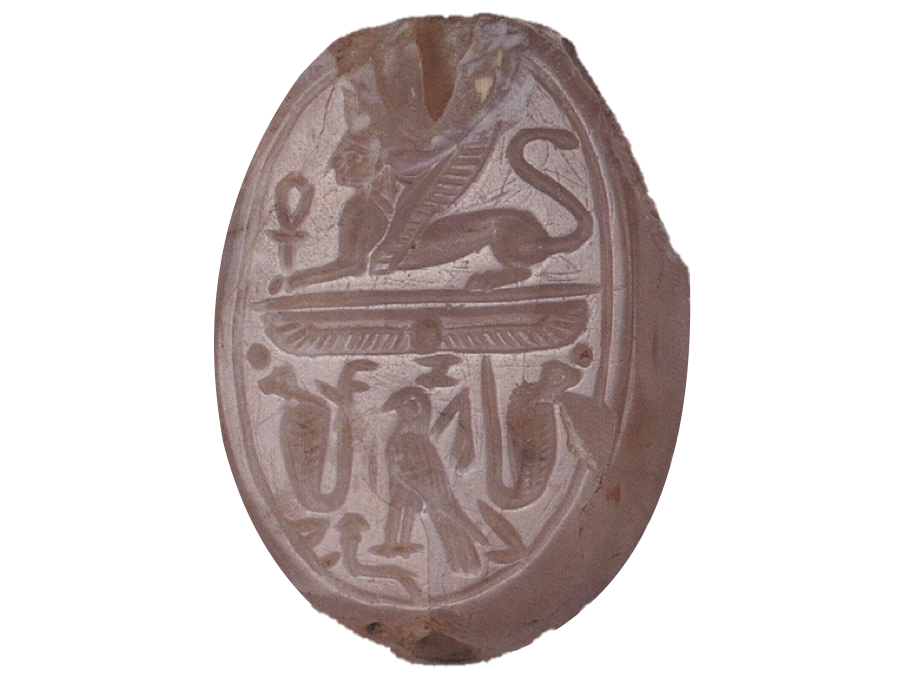 She’s known as one of the truly wicked women of the Bible: Jezebel, the Phoenician wife of Israel’s King Ahab; the pagan power behind the throne; a queen who ordered the death of the Prophet Elijah; a woman who murdered a landowner in order to enlarge Ahab’s private garden; a “whore” who met her prophesied demise after she was thrown from a window and her dead body was eaten by dogs; a royal whose infamous name became synonymous in the New Testament with a pagan, globe-girdling religion.

Archaeology has proved King Ahab to be a historical figure (thanks to the discovery of the Kurkh Monolith). But what about Jezebel?

In 1964, a large, unprovenanced gray opal seal came to light from the Voss-Hahn private seal collection. The scaraboid seal is replete with largely Egyptian imagery, depicted in a Phoenician style. The various motifs include a winged female sphinx wearing a Hathor-goddess crown, a flail-bearing falcon depicting the god Horus, cobras, a winged sun, an ankh, and a lotus flower.

Nestled between the images are four Phoenician letters. They read “יזבל”, yzbl.

This name immediately drew the attention of the seal’s initial researcher, Nahman Avigad. The name is a clear link to the biblical Jezebel (in Hebrew, our English “J” is pronounced as a “Y”). Further, the style of inscription indicated a date no later than the eighth century b.c.e.—perhaps around the ninth to eighth centuries b.c.e. (fitting the time frame of the biblical Jezebel).

Seals belonging to woman are quite rare—and this certainly was a large, royal one, belonging to a wealthy and powerful individual. Could this have belonged to the queen of Israel, Ahab’s wife?

There was one problem.

Avigad noted that the name differed slightly from the biblical Jezebel. The full biblical name includes a silent letter (aleph, א) at the start, spelling out “איזבל”, ‘yzbl. The missing letter has been cause for some debate regarding the identity of the owner.

However, a reanalysis by Dr. Marjo Korpel provided a straightforward answer.

For such seals, we would expect to see another additional letter: Besides the silent aleph to complete “Jezebel,” a lamed as well—the letter l signifying “belonging to,” as typically found on seal stamps.

The yzbl seal, again, is arranged in a peculiar fashion. Two letters (y and z) are positioned in the middle of the seal. And the letters b and l are positioned at the base. At the top of the seal, however, a significant chunk has broken off (a point of weakness, where a cord or wire would have passed through the bored central hole). Based on the layout of the existing letters, it would only make sense for an additional two letters to have been located at the top of the seal—thus, two at the top, two in the middle, and two at the base.

And thus, superimposing the two letters that would most naturally fit with the rest of this inscription, we would have the complete inscription “לאיזבל”, l’yzbl, “Belonging to Jezebel.” As shown in the outline to the right.

Due to the fact that this is an unprovenanced item, there is still a degree of uncertainty surrounding the find. Ideally, such an item would be drawn from the ground and scientifically registered. Still, such an ideal represents only a small percentage of existing, ancient seal stamps. Perhaps up to 90 percent are unprovenanced, coming from the antiquities market or private collections, especially from antiquarian periods up to hundreds of years ago where antiquities were more readily dug up and sold or hoarded without proper documentation. Of course, some small number of forgeries can potentially enter into such the mix. But there is no indication that the Jezebel seal is anything other than a genuine artifact—quite the opposite.

Still, a scholarly debate remains unresolved as to whether or not the evidence of the yzbl seal is sufficient to link to the biblical Jezebel. One item of contention is whether or not this seal could have dated to the ninth century bce. Seals from this early period are extremely rare. (Still, 1 Kings 21:8 describes the existence and use of such seals, by Jezebel herself.) You can read the back-and-forth for yourself here (it’s actually quite interesting—not just for the study of the seal—but also for the kind of vitriol that can accompany such debates).

What are the chances that this seal belongs to any other than the infamous ninth-century b.c.e. Phoenician wife of Ahab—one of the few infamous women in ancient history—and certainly, the only one known by the name Jezebel?

Get Our Magazine Request your free subscription
to Watch Jerusalem magazine
Subscribe
Related
Offers
Isaiah’s End-Time Vision
Isaiah had a prophecy for the end time that was twofold. He delivered his message to the temple priests and to the people of Israel.
Request Now