Push towards democracy seems to be a good step, but will it invite an unwanted guest?
By Callum Wood • June 16, 2018 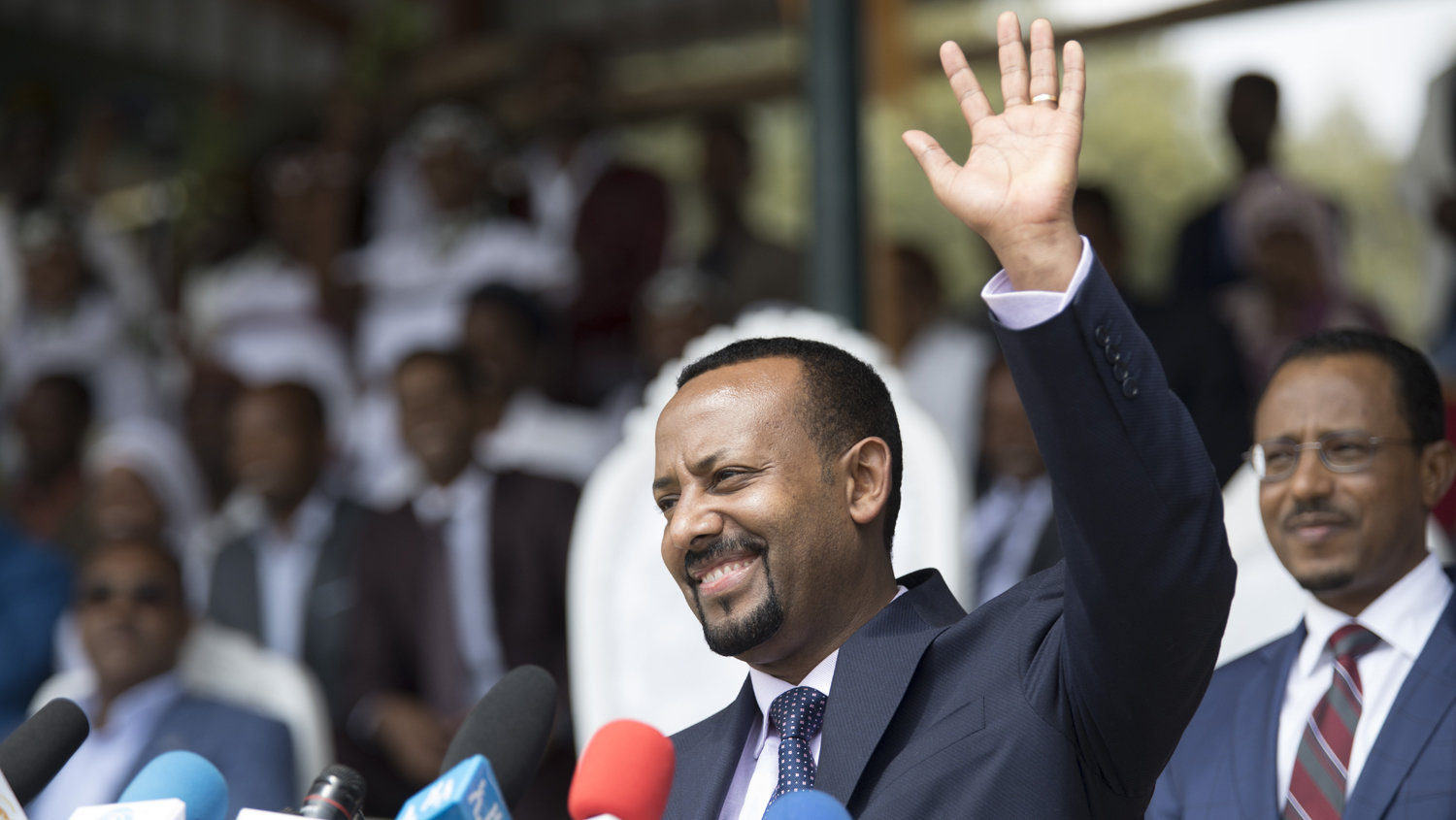 A bloody chapter in Ethiopian-Eritrean history may be coming to an end. Between May 1998 and June 2000, the two nations engaged in a bloody border dispute, and approximately 100,000 died. The war technically ended in 2000, but the deaths have continued along with the border dispute. Spurred by new leadership, the Ethiopian People’s Revolutionary Democratic Front (eprdf) wants to end the conflict. Many African pundits are calling the move a positive step toward peace. Are they right?

The Algiers Agreement, which marked the end of the war in 2000, established the Eritrea-Ethiopia Boundary Commission to settle the dispute. But Ethiopia disagreed with the commission’s conclusions, and border skirmishes continued.

But on June 5, Ethiopia announced its plans to implement those conclusions.

Last Tuesday’s surprise announcement comes on the heels of the March appointment of Abiy Ahmed to the post of Ethiopian prime minister. Ahmed arrived in office with plans to heal the divides between the two nations.

Previous prime ministers had promised to implement the Algiers Agreement, but none did. Many believe Ahmed will finally see it through. On Thursday, Ahmed appointed a new army chief of staff with a specialist background on Eritrea. According to Bloomberg, this is the first change to Ethiopia’s top brass in 17 years. Ahmed also outlined plans to modernize his nation’s economy—this includes open trade with Eritrea.

Ahmed said that the two nations were “not only intertwined in interests but also in blood.” But there has been plenty of that shed in the past few decades. Even so, Ahmed seems determined to reconcile.

So far, Eritrea has made no comment. But what if it welcomes this change in policy? Is a closer relationship with the Eritrean regime in Ethiopia’s best interests?

Iran, the world’s top state-sponsor of terror, has had an eye on Eritrea for some time. The two have been building a friendship over the years. When Asmara supported Iran’s nuclear program in 2009, Tehran wired the nation $35 million.

Iran has worked with Eritrea to smuggle weapons to Somalia. In 2008, an Eritrean opposition site said Iranian troops and weapons disembarked at Eritrea’s Port of Assab; the troops had allegedly arrived to train Somalian militants. Soon after, the United Nations Security Council imposed sanctions against Eritrea.

Iran has already used Eritrea to spread terror in North Africa. In November 2011, Ethiopia discovered a plot by Wahhabi Muslims within Ethiopia. The group was trying to transform the country into an Islamic nation governed by sharia law. The same month, Kenyan media released its own report. It claimed Eritrea had delivered a shipment of arms to Somalia’s Islamist al-Shabaab movement. Eritrea is also accused of providing safe haven for Ethiopian Islamists and supporting Islamist groups in Djibouti, Uganda and Sudan.

This is the nation that Ahmed is eager to deepen ties with. The Independent quoted the new prime minister saying, “Every Ethiopian should realize that it is expected of us to be a responsible government that ensures stability in our region, one that takes the initiative to connect the brotherly peoples of both countries and expands trains, buses and economic ties between Asmara and Addis Ababa.”

It is easy to see how opening the doors to Eritrea could unwittingly invite unwanted guests.

As Yemen and Eritrea prove, Iran has a keen interest in controlling the Red Sea and its southern Bab el-Mandeb entrance. Watch Jerusalem has often discussed Iran’s efforts to control regional sea-lanes.

The Danger of Democracy

Many commentators are excited to see a new face in Ethiopian politics. For years the eprdf has ruled with an iron fist. Economically, there has been little privatization, with the government controlling almost all business. Protests have been met with live-fire policing and jailing of political prisoners.

Now Ahmed is trying to bring about a real democracy. His liberal reforms are shaking the nation. He has lifted the state of emergency. He has freed political prisoners and regime opponents. He has promised to privatize many of the nation’s monopolies. He plans to open the nation to the international community. The first Pizza Hut, KFC and McDonald’s have already appeared on the streets of Addis Ababa.

Ethiopia has a difficult choice: Maintain one-party domination and further inflame ethnic tensions, or institute a “democracy” and run the risk of another descent into sectarianism. Either option runs the risk of capsizing the nation.

But instituting democratic reform risks more than higher rates of heart disease. If he isn’t careful, Ahmed’s reforms could plunge the nation into deeper divides. Notice what the Weeksaid about the “dizzying changes”:

[M]ost development experts, chastened by too many examples to count, the most prominent being Iraq, have, rightly in my view, turned sour on the idea that instant democracy is a cure-all for poor countries. Functioning democracy is a political culture first and foremost, and not a ballot box, and in countries without an educated middle class, the ballot box tends to empower demagogues and kleptocrats—and foster ethnic strife, as people vote on ethnic lines for patronage since ideologies don’t mean much.

Ethiopia is a poster-child of ethnic division.

The Week continued, “All of which means that if Ethiopia liberalizes too much, too fast, that might not be as good a thing as you might think—it might lead to chaos, and thence economic deprivation, or sectarian conflict.”

Radical Islam thrives in chaos. Consider the Arab Spring. Look at Iraq. As the Week pointed out, where did democracy take Iraq? Iran has a more controlling role in the nation today than ever before! And divisions along Sunni-Shiite lines still cut deep. What if the same thing happened in Ethiopia, a nation with 80 different ethnic groups?

Ethiopia has a difficult choice: Maintain one-party domination and further inflame ethnic tensions, or institute a “democracy” and run the risk of another descent into sectarianism. Either option runs the risk of capsizing the nation.

As with many nations, it can be hard to tell where its decisions might lead. Ethiopia is incredibly diverse. With so many tribes, cultures, religions and political affiliations, it can seem hard to make heads or tails of it all.

However, in the case Ethiopia, the Bible makes clear that it will be part of an end time alliance led by the “king of the south.” You can read it for yourself in Daniel 11:40-43. Ethiopia is mentioned here in the context of a clash between a prophesied “king of the south” and a “king of the north.” Watch Jerusalem identifies the former as Iranian-led radical Islam. The latter is a German-led European conglomerate. For more on these two powers, request our free booklet The King of the South.

But what of Eritrea? Well, Ahmed is right. Ethiopia and Eritrea are intertwined. Watch Jerusalem editor in chief Gerald Flurry wrote in a 2011 article titled “Libya and Ethiopia Reveal Iran’s Military Strategy”:

Whoever heavily influences or controls Ethiopia will undoubtedly also control the small areas of Eritrea and Djibouti on the Red Sea coastline. These areas only recently became independent of Ethiopia. Also, I believe the Bible view is that these small areas are included as a part of Ethiopia.

So both Ethiopia and Eritrea will be aligned within this king of the south. This implies there must be some sort of peace between the two—instituted militarily or diplomatically. This is why the we watches events in this region. The king of the south alliance includes the specific nations of Egypt, Libya and Ethiopia. Such an alliance has never been formed, so it must be for the end time, which we are living in today. We are about to see dramatic changes in Ethiopia, including an alliance with Iran.

Ethiopia and Eritrea cannot come to peace because they look to the solutions of men. The world around us proves where that leads! Ethiopia is about to prove it further!

For more on Ethiopia and Eritrea’s role in world events, be sure to request and read our free booklet King of the South.