A look at the oldest biblical texts ever discovered
By Rachael Grellet • June 25, 2018 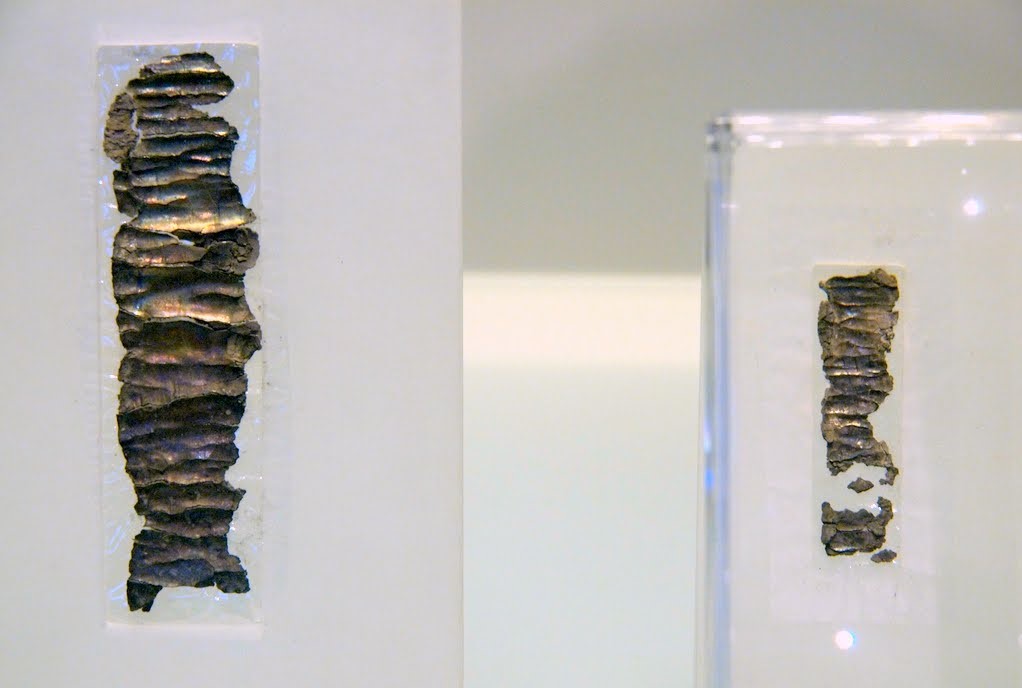 The Ketef Hinnom scrolls, as displayed in the Israel Museum.
liamalpha/Wiki Commons

In the early 1980s, after three years of research and testing, the archaeological world was rocked as the text of two tiny, silver scrolls was at last exposed to the light.

Discovered in 1979 under excavations conducted by Prof. Gabriel Barkay, the Ketef Hinnom scrolls were so delicate that two museums declined the opportunity to work with them. When conservators at the Israel Museum at last unrolled them, they found text from the Bible, specifically Numbers 6 and Deuteronomy 7.

These scrolls were among a collection of over 1,000 objects found in a tomb on the edge of the Hinnom Valley, southwest of the Old City of Jerusalem. Made of 99 percent pure silver, one scroll measures 3.8 inches high by 1 inch wide when unrolled; the second measures only 1.5 by 0.4 inches. Professor Barkay stated these scrolls were probably worn as amulets.

… the great … [who keeps] the covenant and graciousness toward those who love [him] and those who keep [his commandments …].
The Eternal … blessing more than any … and more than evil. For redemption is in him. For Yahweh is our restorer [and] rock.
May Yahweh bless you and keep you. [May] Yahweh make [his face] shine ….

… who keepeth covenant and mercy with them that love Him and keep His commandments… (Deuteronomy 7:9; Jewish Publication Society)

The LORD bless thee, and keep thee; The LORD make His face to shine upon thee … (Numbers 6:24-25; Jewish Publication Soceity)

May [he/she] be blessed by Yahweh; The warrior/helper and the rebuker of evil:
May Yahweh bless you and keep you; May Yahweh cause his face to shine upon you and grant you peace.

The scrolls were dated based on the artifacts around them to be from the late-seventh to early-sixth century, somewhere between 650–585 b.c.e. Bible critics deemed this improbable, as the Bible wasn’t supposed to be finished and distributed until the second and third century. But technological advances in recent years have made it possible to close the scrolls’ window of creation to the seventh century. New, high-definition photographs were examined by four scholars of four different institutions who concluded that the new techniques enabled them to “reaffirm with confidence that the late preexilic period is the proper chronological context for the artifacts.”

This conclusion was based on the style of writing used, matching the form used before the conquest of Judah by Nebuchadnezzar in the early sixth century B.C.E., similar to letters found at the biblical city of Lachish, which was destroyed in the Babylonian conquest.

This confirmation of dating makes these scrolls conclusively the oldest biblical texts ever found. For more information, read our article on the “Antiquity of the Scriptures.”