‘We take this step because our commitment does not allow us to remain a part of a hypocritical and self-serving organization that makes a mockery of human rights.’
By Watch Jerusalem Staff • June 23, 2018 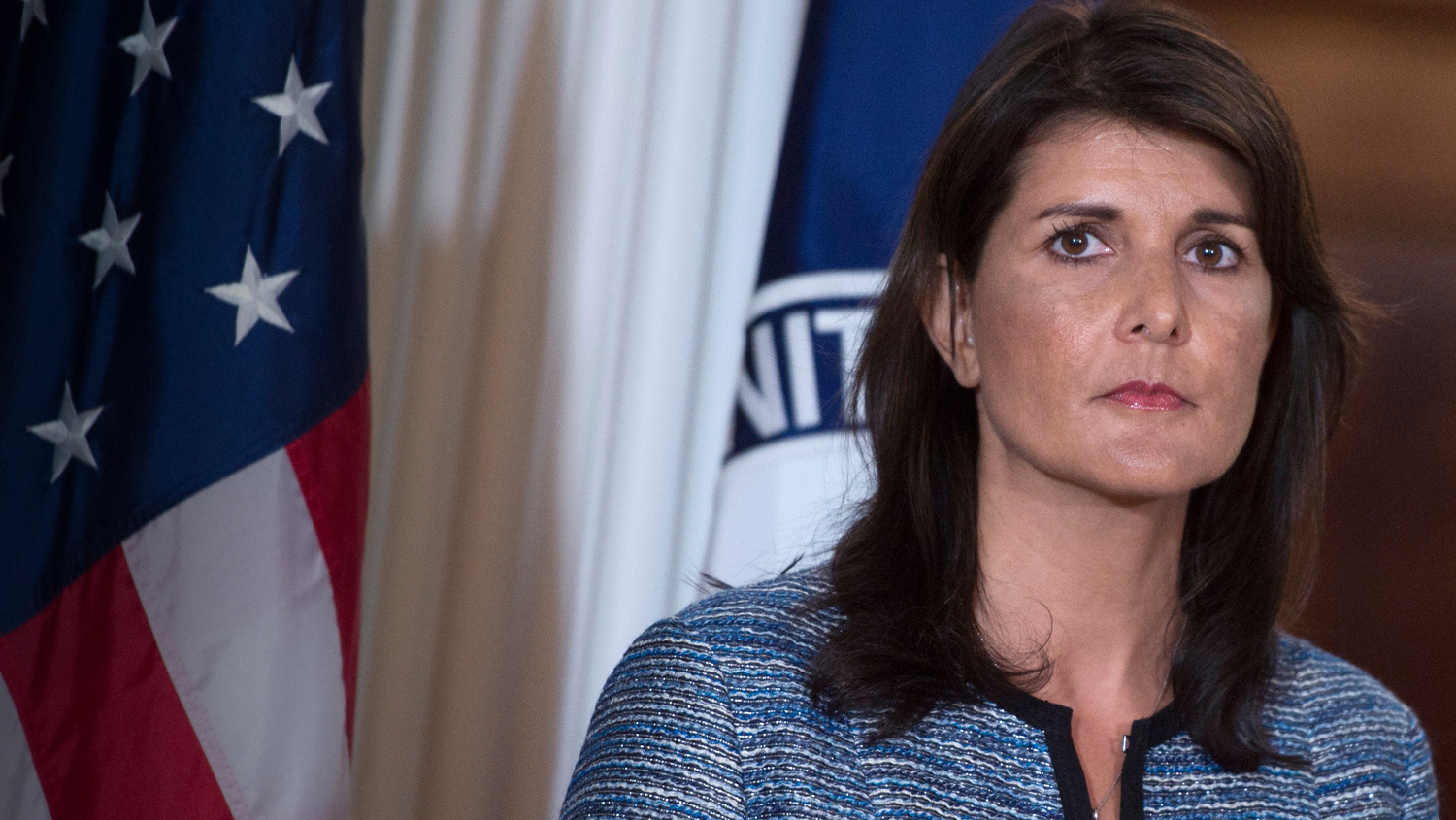 U.S. Ambassador to the United Nations Nikki Haley speaks at the U.S. Department of State in Washington, D.C.
CABALLERO-REYNOLDS/AFP/GETTY IMAGES

The United States officially withdrew from the United Nations Human Rights Council (unhrc) on Wednesday, June 20, as U.S. Ambassador Nikki Haley announced. Since 2017, Haley has been voicing such rhetoric stressing the organization’s heavy “anti-Israel bias.” Now the U.S. has acted, branding the council a “cesspool of political bias.”

Haley expressed her frustration with the council during Wednesday’s announcement: “We take this step because our commitment does not allow us to remain a part of a hypocritical and self-serving organization that makes a mockery of human rights.” She added that the council had a “chronic bias against Israel.”

“Anti-Israel” activity in recent council sessions led the U.S. out the door. In light of rising Palestinian deaths during protests across the Gazan border, Kuwait drafted a resolution on June 1. It condemned Israel of “excessive, disproportionate and indiscriminate force by the Israeli forces against Palestinian civilians” and demanded that they stop.

In return, the U.S. proposed a resolution condemning Hamas for the violence occurring in Gaza, but it gained zero traction with the only vote coming from its own seat. The New York Times reported, “Israel has contended that its military is acting lawfully to stop the protesters from breaching the fence, and it has rejected accusations that soldiers have used deadly force needlessly. The Israelis have also accused Hamas and its militant affiliates in Gaza of using the protests as cover for sending attackers into Israel.”

Hamas was not mentioned once in Kuwait’s resolution. But Hamas is considered to be a major terrorist group by both the U.S. and Israel. Danny Danon, the Israeli ambassador, said in response, “You couldn’t bring yourself to mention Hamas even once. Don’t you know how to spell it?” Haley accused the resolution of being “one-sided,” only blaming Israel without even considering the violence caused by Hamas.

The U.S. resigned its seat “effective immediately.” It may stay in the unhrc as an observer and abstain from voting, but no further details have been released. If the council reformed, Haley said the U.S. “would be happy to return.” It believes this is the only way it could convey its seriousness to the council, a move it has been threatening since last year. “For too long,” continued Haley, “the Human Rights Council has been a protector of human rights abusers, and a cesspool of political bias. Regrettably, it is now clear that our call for reform was not heeded.”

U.S. Secretary of State Mike Pompeo backed up Haley, saying the council once had a “noble vision” but has become “a poor defender of human rights,” ultimately not living up to its name.

Israeli Prime Minister Benjamin Netanyahu firmly supported the U.S.’s decision, remarking that the council is a “biased, hostile, anti-Israel organization that has betrayed its mission of protecting human rights.”

Between March 30 and May 15, over 100 Palestinians have died and hundreds more have been wounded in the March of Return. Despite the death and violence, Hamas refuses to end the protests, so casualties will continue to rise as Israel defends its border.

When the unhrc ordered an investigation into the violence occurring on the Gaza border on May 19, Israel rejected it immediately. The probe was prepared to look into the 60 Palestinian deaths that occurred on May 14, investigating Israel’s “disproportionate and indiscriminate use of force” on Palestinian civilians. Israeli Defense Minister Avigdor Liberman tweeted in response that the unhrc has become a “cheerleader for terrorists.”

Political analyst Jeremiah Jacques addressed the corrupt leaders of the unhrc and their hypocrisy in a 2013 article titled ‘Do Russia and China Deserve to Sit on the UN Human Rights Council?’ He wrote, in response to Russia and China gaining seats on the council on Nov. 12 of that year:

As ridiculous as it is to place some of the world’s most notorious and unapologetic violators of human rights in charge of the UN’s Human Rights Council, it is far from the first time the organization has made such a childish decision.

Back in 2007, Iran—the defiant nation that brags about how it deceives the international community regarding its nuclear weapons program—was appointed vice chairman of the UN Disarmament Commission. Yes, that’s the same Iran that is the world’s number one sponsor of terrorism. The same year, Zimbabwe was elected chair of the Commission on Sustainable Development. That was just a few months before the climax of Zimbabwe’s astonishing hyperinflation crisis. That crisis culminated in the country printing a $100 trillion bank note. The bill said $100 trillion on it (that’s a one with 14 zeros) but within a few months after being printed, it was worth virtually nothing. Does that sound like the kind of country that should head up an international commission focused on making nations economically strong? …

The biggest failure by far though is that the UN has not accomplished its stated purpose: keeping the peace. From the UN’s inception in 1945 until early 2010, there have been 267 wars and over 3,000 other military conflicts. Almost as many people have been killed in all these altercations as died in World War ii itself.”

Our predecessor and strong friend of Israel, the late Herbert W. Armstrong predicted the UN’s failure to keep peace way back in 1945. He attended the inaugural session for the UN and wrote: “Already I see the clouds of World War iii gathering at this conference. … I do not see peace being germinated here, but the seeds of the next war!”

He followed up on his prediction in the January 1977 issue of the Plain Truth:

The United Nations won’t be able to bring peace. The aggressor nations–and we are so gullible we never recognize them until after they plunge the world into war—will go right on with their scheming and diabolical planning for world rule.

Mr. Armstrong recognized the flaws in the UN back right at its inception! What is happening in the unhrc today further proves the corrupt and hypocritical nature of the nations who hold seats in that organization.

Request our free booklet The Way of Peace Restored Momentarily to learn more about Mr. Armstrong’s legacy and the way true peace will come soon to this world.