Turkey has effectively become an autocratic state that can be dominated by Erdogan for the next decade.
By Brent Nagtegaal • June 24, 2018 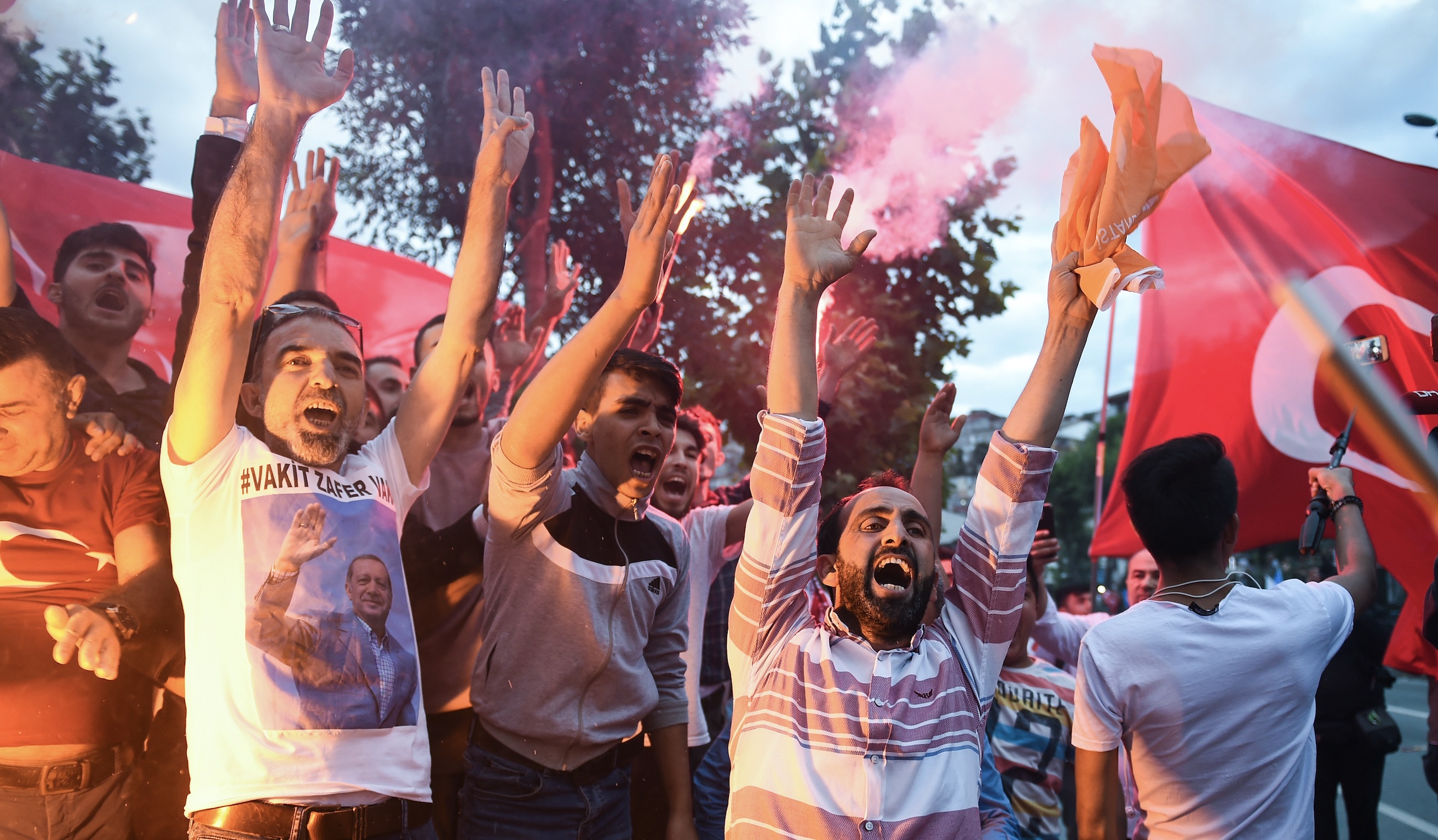 JERUSALEM — Turkish strongman Recep Tayyip Erdoğan has likely cemented his control over Turkey for the next decade, cruising to victory in Sunday’s parliamentary and presidential elections. The victory culminates a 15-year transformation of Turkish politics, overseen and largely orchestrated by Erdoğan.

New executive powers will be transferred to Erdoğan as a result of a 2017 change in the constitution that made Turkey an executive presidency. Erdoğan will be able to run for possibly two more terms, likely extending his rule to 2029.

“I have been entrusted by the nation with the tasks and duties of the president,” Erdoğan said as he claimed victory.

According to the chief of Turkey’s election authority, Sadi Guven, Erdoğan defeated his closest rival Muharrem İnce with an absolute majority. He won 52.5 percent of the vote in the presidential poll, with 99 percent of the total vote counted. In the parliamentary elections, Erdoğan’s Justice and Development Party (akp) and its coalition partner easily won more than half of the seats.

The tandem of parliamentary control combined with the new presidential powers, which include executive power over the judiciary, gives Erdoğan unchecked and unmatched power in the modern era of Turkey.

With 88 percent turnout in Sunday’s election, Erdoğan says that “Turkey has given a lesson in democracy to the entire world.”

Erdoğan’s party, the akp, came to power in 2002. Its leader, the former mayor of Istanbul, became prime minister from 2003 to 2014. Then he transitioned to the presidency.

Over the past 15 years, this strongman has overseen a radical change in the governance of the state, transforming Turkey from a realm where secularism was sacred to one where Islam now dominates.

Turkey is a functioning democracy, and many Turks hoped that Erdoğan and his party would eventually be voted out of office and lose power. However, the past two years have vanquished that hope and have assured Erdoğan’s place as Turkey’s strongman for the foreseeable future.

On the evening of July 15, 2016, Turkish tanks rolled into Istanbul. Soon the sonic boom of tactical jets and the low thumping of helicopters could be heard flying overhead. A coup d’état was underway.

The military has protected Turkish secularism for more than 50 years. In 1960, 1971, 1980 and 1997, the military had preserved the modern secular democratic state by successfully overthrowing the government. In a day or two, it seemed, the increasingly authoritarian and Islamic strongman of Turkey would no longer have the keys to the White Palace.

But Erdoğan managed to evade the revolutionaries as they descended on the coastal hotel where he had been staying. He then appeared on cnn Türk, calling on his supporters to take to the streets and use all means necessary to stop the insurrection. The people obeyed, defying the military’s imposed curfew. Footage quickly emerged on social media of men in plain clothes trying to hold back battle tanks, some even lying in front of them as they plowed forward. This further motivated Erdoğan’s supporters to come out in droves. The iconic moment of the coup came the next day. It wasn’t the image the military had hoped for: Erdoğan in handcuffs. Instead, it was the image of soldiers laying down their weapons in surrender and being marched off the Bosporus Bridge. The military takeover had failed.

Worse than just botching the coup, the futile military action gave the president the rationale he needed to remove dissenters from positions of power throughout the nation. Since then, Erdoğan has sacked 146,713 state officials, teachers, bureaucrats, academics and military personnel. He has arrested 61,247 individuals, shut down over 3,000 schools, universities and dormitories, and dismissed 4,463 judges and prosecutors. To ensure the purge doesn’t attract too much attention, he has shut down 187 media outlets and arrested 308 journalists.

With the military culled, the media silenced, and anti-Erdoğan government technocrats removed, Erdoğan decided to go after the Turkish Constitution. On April 16, 2017, Turkey held a nationwide referendum on 18 constitutional amendments proposed by Erdoğan’s party. The reforms passed in a close vote. Turkey is now transformed from a parliamentary democracy to a presidential republic, and Erdoğan can remain in power until 2029 if he continues to win successive elections.

Erdoğan has been tightening his hold on power for years, but never as overtly as in the last two years. But surprisingly, most of his actions have the support of the majority of Turks. They are the ones who answered the call from the minarets to stop the tanks in their tracks. They reelected him over and over in spite of his authoritarian tactics. They approved his constitutional amendments. And with 88 percent turnout in Sunday’s elections, they gave Erdogan unmatched and unchecked power.

Last month, the Trumpet interviewed the former editor of Turkey’s largest daily newspaper, Zaman. “Exiled Journalist: Beware Turkey’s Authoritarian Shift” was the article that came from that that interview. In it, Joel Hilliker wrote,

This transformation in Turkey is not a rare fluke. It is part of a trend that is affecting other major nations. For nearly two centuries, democratic, free societies—led by the British Empire and the United States—have flourished. But modern, sophisticated, wealthy and well-armed nations are now reverting to authoritarianism.

In Asia, Vladimir Putin is dominating Russia, Xi Jinping is controlling China, Shinzō Abe is reviving militarism and nationalism in Japan, and Rodrigo Duterte is bluntly, unapologetically and vulgarly scorning the rule of law in the Philippines. In Europe, record numbers of voters are electing nationalists: Viktor Orbán in Hungary, Sebastian Kurz in Austria, Andrej Babiš in the Czech Republic. In the Middle East, the flash of optimism during the Arab Spring is over, and the region has emerged even less democratic and free—ruled by autocrats and riven by tribalism and violent turf wars.

By several measures, looked at globally, the power of governments and individual leaders is growing, and the freedoms of citizens are eroding. People are recognizing that the world is getting more aggressive and more dangerous. They are looking for security and protection. And strongmen are promising to provide it.

For nearly two centuries, the world has experienced the spread of democratic, free societies. The 21st century, on the other hand, has seen a vastly different trend: the rise of authoritarian strongmen.

This is a surprising development, considering our liberal societies. Nevertheless, it is a trend that the Bible prophesied thousands of years ago.

If you would like to learn more about the strongmen currently on the world scene and how they fit into Bible prophecy, read Trumpet executive editor Stephen Flurry’s article titled “The New Strongman Age.”