A Trio of Biblical Prisms

These artifacts depict the conquests—and almost conquests—of Assyrian King Sennacherib over the nation of Judah.
By Rachael Grellet • August 7, 2018 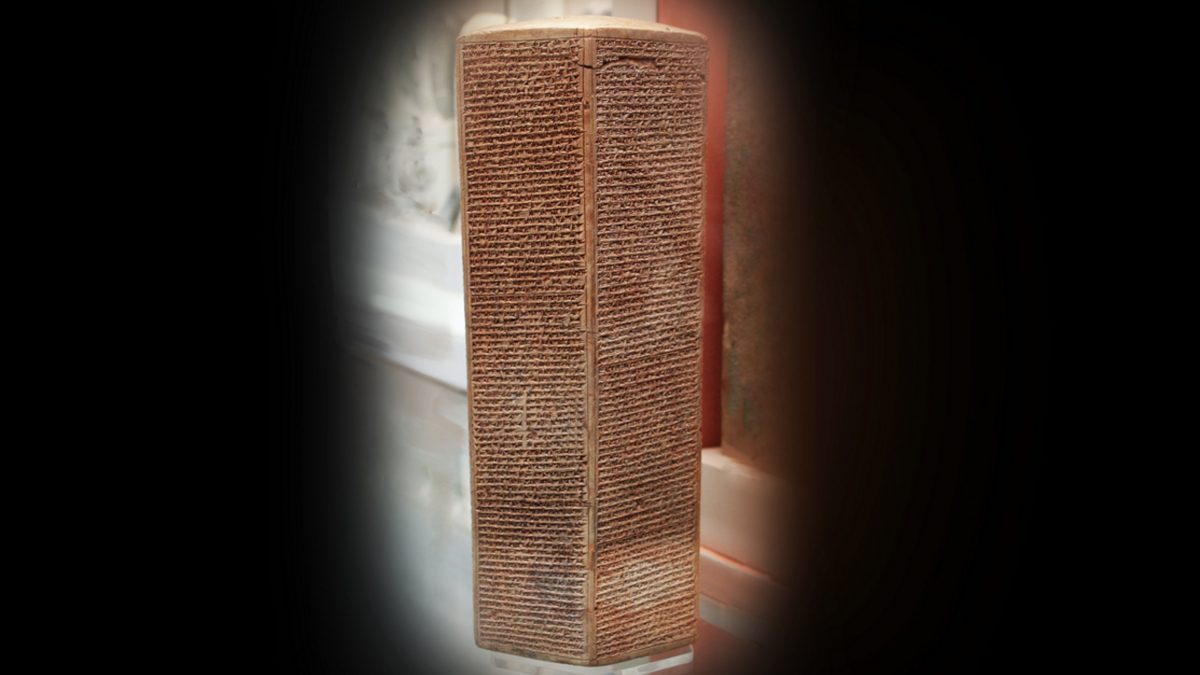 The reputation of King Sennacherib of Assyria brought fear and terror into the hearts of the region. His conquests were bloody and fierce, his mercy seemingly nonexistent. He expanded the Assyrian Empire rapidly and put down all insurrections with a ruthless hand. Few dared stand against him.

Sennacherib’s capital city was Nineveh. It was here that Sennacherib constructed two massive buildings, his “Palace without Rival” and an arsenal known as the “rear palace.” The remains of these buildings are known as Kuyunjik and Nebi Yunus, respectively.

Sennacherib’s military campaigns are well known today. Discoveries include hundreds of fragments of cuneiform-covered cylinders, giant wall reliefs depicting the siege of Lachish found on his palace in Nineveh, and, most compelling of all, three complete prisms that detail all eight of his major campaigns. Most interesting of these campaigns is Sennacherib’s invasion into Israel and Judah, which parallels the biblical account exactly.

These prisms are typically six- or eight-sided clay cylinders. They were used to record history and record a ruler’s achievements. Often when building a major structure, such as a palace, these prisms would be made and then set in the foundation of the structure. If the structure were destroyed, the prisms would inform the destroyer whose structure it was and act as a warning against destroying his buildings in the future. Prisms have become one of the best sources of information for archaeologists.

The most well known of Sennacherib’s three prisms is the Taylor Prism, which was found in the 1830s and named after Col. R. Taylor, Britain’s assistant political agent in Basra, Iraq. Measuring 38 centimeters (15 inches) tall, it has six sides and is made of red clay. This prism was commissioned by Sennacherib as a dedication prism, and depicts his eight major military campaigns. It was found in excavations of Nebi Yunus, the arsenal building. The British Museum acquired the artifact from Colonel Taylor’s widow in 1855.

The origins of the Oriental Institute Prism and Jerusalem Prism are hazier. The first record of each was when they were purchased by larger museums. The Oriental Institute bought the Sennacherib Prism in 1919 from an antiquities dealer in Baghdad. The Jerusalem Prism, acquired by the Israel Museum in 1970, was not deciphered and released until 1990.

What is most remarkable about these prisms is the fact that the history they attest to matches the biblical account near perfectly.

The Assyrian Empire overran the northern kingdom of Israel in campaigns from 721 to 718 b.c.e. Following this victory, Sennacherib continued southward into Judah. The Taylor Prism depicts this incursion as follows:

As for the king of Judah, Hezekiah, who had not submitted to my authority, I besieged and captured 46 of his fortified cities, along with many smaller towns, taken in battle with my battering rams … I took as plunder 200,150 people, both small and great, male and female, along with a great number of animals including horses, mules, donkeys, camels, oxen and sheep.

This parallels a passage in 2 Kings 18:13 (New International Version):

In the fourteenth year of King Hezekiah’s reign, Sennacherib king of Assyria attacked all the fortified cities of Judah and captured them.

Sennacherib boasts of this tribute on the Taylor Prism also:

Fear of my greatness terrified Hezekiah. He sent to me tribute: 30 talents of gold, 800 talents of silver, precious stones, ivory and all sorts of gifts, including women from his palace.

Thus we see direct correspondence between the biblical account and Sennacherib’s records. Thirty talents of gold were requested (as per 2 Kings 18:14), and that is what he received. However, the Bible states that 300 talents of silver were requested, and Sennacherib’s inscription states he received 800.Why the apparent discrepancy? One explanation is that the 800 talents may have referred to the combined weight of the following objects in the sentence—not just silver, but also the precious stones and ivory.

Such a great tribute seemed only to fuel Sennacherib’s desire for conquest, and he marched onward to Jerusalem.

One of Sennacherib’s greatest boasts found on the Taylor Prism is also one of the most revealing statements backing the biblical account:

As for Hezekiah, I shut him up like a caged bird in his royal city of Jerusalem. I then constructed a series of fortresses around him, and I did not allow anyone to come out of the city gates. His towns which I captured I gave to the kings of Ashdod, Ekron and Gaza.

Sennacherib nowhere mentions his great victory over the city of Jerusalem, what surely would have been the crowning moment of his campaign into Judah! It isn’t depicted in the reliefs of his palace walls as the siege of Lachish was. No Assyrian documents tell of this victory. Why? Because Sennacherib was unable to conquer Jerusalem due to miraculous intervention from God! He wiped out 185,000 of Sennacherib’s troops in a single night, halting the Assyrian invasion!

The full story of this invasion and Judah’s miraculous delivery can be read in “Hezekiah: a Story, a King, a Legacy.”

This would be Sennacherib’s last campaign—soon after returning to Nineveh, Sennacherib was assassinated by two of his sons. The Assyrian Empire waned temporarily with such turmoil in its leadership and Judah remained independent for another century before being captured by the Babylonians.

The history found on Sennacherib’s prisms shows that the Bible lives. It confirms 2 Kings 18:17, which states that Sennacherib set up his forces around Jerusalem. It backs up 2 Kings 19, which details the tribute King Hezekiah sent in a desperate attempt to appease Assyria. And it also attests to the fact that Sennacherib didn’t conquer Jerusalem, an event explained by the Bible!