Are We Close to Another Iran deal?

President Trump says he is willing to sit down with Iran—anytime. Will Iran come to the table?
By Brent Nagtegaal • July 31, 2018 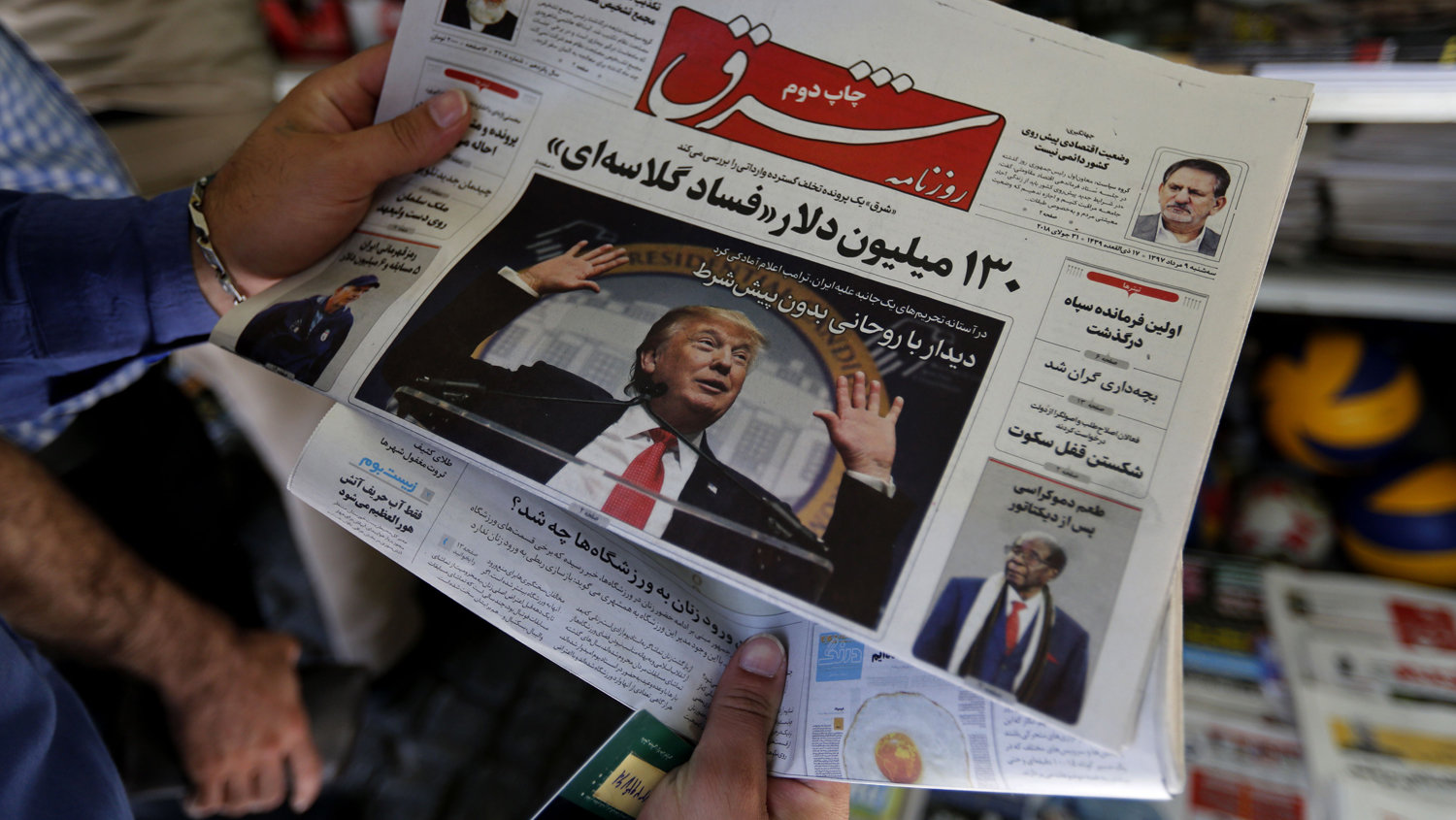 A man takes a glance at a newspaper with a picture of US president Donald Trump on the front page, in the capital Tehran on July 31, 2018.
ATTA KENARE/AFP/GETTY IMAGES

United States President Donald Trump is willing to meet with Iranian President Hassan Rouhani “without preconditions” and “anytime they want.” The decision to open the door to negotiations, even while calling out the nation for its offenses, seems to mimic Mr. Trump’s policy of engagement with other belligerent nations.

His comments during a press conference with Italian Prime Minister Giuseppe Conte on Monday were prompted by a reporter.

The “hard time” that Iran is facing, is a reference to Iran’s extreme financial crisis as its currency, the rial, continues to plummet. Since the start of 2018, the rial has lost nearly two thirds of its value, including a 19 percent drop since Sunday.

The Iranian government has tried to stabilize the economy, but to no avail. What’s even more worrying for the Iranians is that the reimposition of U.S. sanctions has not even happened yet. The first group of sanctions will be imposed on August 6, and the full sanctions—including those on Iranian oil exports—will begin November 4.

The Iranian economy, already in a bad way, is set to get much worse.

The effect could push Iran in one of two directions: It could lead the nation to change its behavior, the more hopeful option; or it could make Iran even more dangerous.

Comments between the two leaders last week seem to indicate that we were on a warpath.

Rouhani also doubled down on his previous threats to disrupt global shipping in the Strait of Hormuz, saying Iran has been “the guarantor of the regional waterway’s security throughout history.” His threats were reinforced by a senior Iranian military official who said, “The Strait of Hormuz region must either be safe for all or be insecure for everyone.”

President Trump responded with a threat of his own on Twitter:

To Iranian President Rouhani: NEVER, EVER THREATEN THE UNITED STATES AGAIN OR YOU WILL SUFFER CONSEQUENCES THE LIKES OF WHICH FEW THROUGHOUT HISTORY HAVE EVER SUFFERED BEFORE. WE ARE NO LONGER A COUNTRY THAT WILL STAND FOR YOUR DEMENTED WORDS OF VIOLENCE & DEATH. BE CAUTIOUS!

This back-and-forth has some commentators wondering whether Trump is following the precedent of the somewhat successful North Korea talks. The Wall Street Journal wrote:

His remarks evoked his approach to North Korean leader Kim Jong-un, with whom he met in June, just 10 months after threatening Pyongyang with “fire and fury like world has never seen.” Similarly, Mr. Trump has sought to tighten diplomatic relations with Chinese President Xi Jinping, after accusing Beijing of manipulating its currency and “raping our country” on trade.

But while this process seems to be working with North Korea, there is every reason to believe that it will be much harder to bring Iran back from the brink.

“The demands the Trump administration has presented for any new Iran nuclear deal would require Iran to cease its support for militant groups in the Middle East and stop enriching all uranium, a stipulation that is stricter than the 2015 Iran accord,” continued the Wall Street Journal.

While there might be discussions with Mr. Trump, it is hard to believe that any amount of pressure from the U.S. would be able to change Iran—barring a complete regime change in Tehran. After Mr. Trump’s comments, the regime dismissed out of hand that there wouldn’t be any negotiations with the United States any time soon.

While Iran can, in some instances, appear as a democracy, a look back at the regime’s foundation shows why it is impossible for Iran to change course.

In 1979, Ayatollah Ruhollah Khomenei returned to Iran from exile. He and other Islamist clerics declared Iran’s monarchy to be extinct. Khomenei and his fellow Shiite revolutionaries were determined to build an empire—but one far different from the Persian Empire of antiquity. They purged the government and created a regime comprised of fundamentalist Islamic clerics. By their decree, strict religious practices began to be enforced across the nation: Offenders were severely and even violently punished.

This absolute rule of the clerics or mullahs, known as valayat-faqih, is the foundational principle of post-revolution Iran.

At the head of Iran’s government is the “supreme leader,” currently Ali Khamenei. The supreme leader is considered to be the heir of the prophet Mohammed and the representative of the famed 12th and final imam to come. According to Shia Islam, the supreme leader not only has power over the Iranian regime, but also full and absolute authority over all Muslims. Therefore, Shia Muslims generally do not recognize any man-made national borders or national governments as legitimate when it comes to Islamic affairs.

Iranian foreign policy adviser Mohammed-Javad Larijani once said about his nation, “We have a major place in the world of Islam. There is no country other than Iran that has the ability to lead the Islamic world.”

The Iranian Revolution wasn’t just a regime change inside Iran, but rather a fundamental transformation of how Iran viewed the Islamic world and the rest of the globe. Islamic leadership belonged not to Saudi Arabia, Egypt or Turkey, but to the supreme leader in Iran.

This lack of political borders creates a lack of traditional constraints, something we in the West are unfamiliar with.

Trying to induce Iran away from its expansionist goals and its actions in places like Syria, Lebanon, Yemen and Iraq is tantamount to pushing Iran to denounce the fundamental belief of the regime. This is unlikely to change, especially since most in the regime believe that a violent war will actually hasten the coming of their 12th imam.

The fundamental nature of the Iranian regime means that it is unlikely to moderate, even if it did sit down with Mr. Trump.

However, there is another reason we know that Mr. Trump’s outreach to Iran will not be successful: Bible prophecy!

In the early 1990s, when Iran and Iraq were on equal footing, Watch Jerusalem editor in chief Gerald Flurry forecast that Iran was about to rise up and dominate the Middle East. He said Iran would eventually grow strong enough to aggressively push against the West, specifically against a resurgent Europe. This outcast nation would build a powerful regional bloc on a foundation not of oil, money, technology or arms, but on a unique combination of fervent religion and bloody terrorism.

Almost 30 years later, this is the Iran we see today. How did we know that radical Islam would become so potent and that Iran would be its warlord?

The answer came from the Bible. If you would like to learn more about this prophesied rise of Iran and why it will not moderate anytime soon, please request Mr. Flurry’s free booklet The King of the South.