Early Cylinder Seals and the Garden of Eden

Do these represent parallels of some of the earliest biblical themes?
By Christopher Eames • September 2, 2019 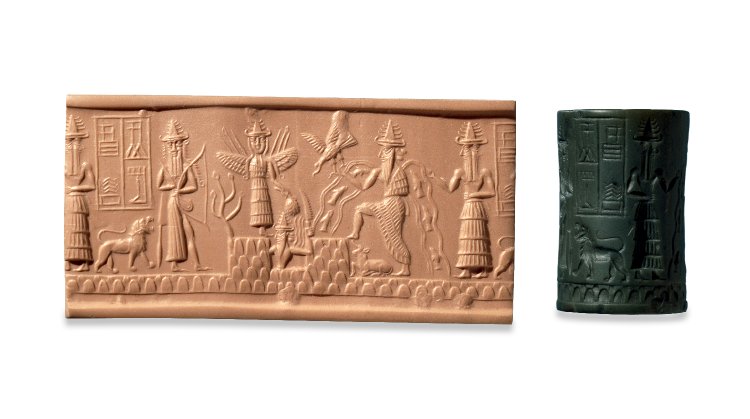 Greenstone Adda Seal, c. 2300 BC
Courtesy of the Trustees of the British Museum

Cylinder seals are small, round seal stamps that are designed to be rolled across a piece of clay in order to produce a rectangular image. They are slightly different from the more standard seal stamps, which are simply pressed down over a piece of clay. Cylinder seals are often very detailed, made of semi-precious stones, and contain a small story. They are among the earliest seals, dating back as far as 3500 b.c.e., and have their genesis in ancient Mesopotamia.

While numerous cylinder seals have been discovered, this article will examine two interesting seals that have a possible link to some of the earliest themes of the Bible.

This greenstone seal dates to around 2250 b.c.e. Since its discovery (at least, over the past 150 years), it has been related to the “fall of man” in the Garden of Eden—for good reason.

The seal depicts a fruit tree, along with a female figure seated to the left of the tree and a male to the right. Both figures are reaching for a piece of fruit. A snake is angled toward the woman, its head close to hers.

This brings to mind Genesis 3. God had instructed Adam and Eve about the two trees in the Garden of Eden: The tree of life symbolized the way of God; the other, the tree of the knowledge of good and evil, symbolized the way of Satan the devil. God warned Adam and Eve against eating from the wrong tree, and encouraged them to eat from the tree of life. In Genesis 3, Satan, manifested as a serpent, talked to Eve, persuading her to take of the tree of the knowledge of good and evil. Eve was convinced, contrary to God’s instructions, that this was the right decision, and she (and her husband, who was with her) took of the fruit of the tree. This foundational moment, commonly referred to as the “fall of man,” laid the foundation for future civilization—a world cut off from God (Genesis 3:22-24). For more information on this subject, read our free reprint article “The Mystery of the Two Trees” (and for a much more in-depth analysis, read Mystery of the Ages, by Herbert W. Armstrong).

This imagery has been reproduced in various forms throughout history (such as in the image to the right, c. 320 c.e.)—whether in the more literal form of Adam and Eve or embellished for added ritual significance (such as seems to have been the case with the above seal—the male figure given horns as a deified individual). Assyriologist George Smith (1840–1876) of the British Museum wrote of the seal:

We know well that in these early sculptures none of these figures were chance devices, but all represented events or supposed events, and figures in their legends; thus it is evident that a form of the story of the fall, similar to that of Genesis, was known in early times in Babylonia.

This cylinder seal is more speculative. Another greenstone seal, it dates to about the same time, c. 2300 b.c.e.

This image displays several deities and animals. The text box in the left of the above image gives the name of the scribe to whom it belonged, Adda. The winged figure in the middle represents the Sumerian goddess Inanna (Ishtar). She is holding some kind of object—possibly a branch of dates—over the head of the sun-god Shamash, who is holding a serrated knife, looking directly at her foot. This image might be a loose representation of the passage in Genesis 3:15, the first description of the salvation of man:

And I will put enmity between thee and the woman, and between thy seed and her seed; it shall bruise thy head, and thou shalt bruise his heel.

As such, the armed Shamash looking directly at the “heel” of the woman, and Inanna holding an object directly over the head of Shamash.

To the right is a classic depiction of the Sumerian god Enki, god of waters. He is quite commonly depicted with two rivers of water on either side of him. But in this image, he appears to be releasing a raven. Could this be some kind of link to the great Flood? A Sumerian flood epic from around this time period—called the Epic of Gilgamesh—makes reference to a raven being released after the waters had subsided (just as in the Bible). Does this seal indicate this imagery?

To the left of the image is a powerful man with a bow, faced by a roaring lion. This brings to mind the biblical “Nimrod, the mighty hunter.” Nimrod was actually the founder of the Sumerian civilization after the Flood (Genesis 10:10—“Shinar” is synonymous with “Sumer”). He is almost certainly one and the same as the Sumerian ruler Enmerkar (a name that is speculated to relate to the theme of hunting—see here for more information on this character and his link to Nimrod). Nimrod was regarded as a “protector” of the populace from wild animals. (One alternate translation of his name is “subduer of the leopard.”) This figure on the seal has been speculated as being the deity Tammuz (referenced in Ezekiel 8)—and Tammuz, in later traditions, is a figure directly associated with Nimrod.

To the right of this “Nimrod,” in the center, is the winged figure Inanna (Ishtar), with a tree between the two of them. Later traditions ascribe Nimrod and this goddess (also known as Semiramis) as being a mother-son couple. There is a Sumerian love-hymn in which Inanna describes her consort Tammuz as an “ildag tree.” In the Sumerian language, the tree is a symbol of the male sex apparatus. Thus, this image may represent the sexual relationship between Inanna and Tammuz, “son-man who is life.” Again, for more information on Inanna, Tammuz, and Nimrod—as well as their continued worship to this day—see our article NIMROD: Found?

It is interesting to speculate the nature of these ancient seals—and the imagery on them does parallel imagery used in the first chapters of the Bible.

Generally, modern scholars believe that the Torah—the first five books of the Bible (including Genesis)—was composed around the fifth century b.c.e. (or even later). Yet parallel stories and imagery have been found that go back millennia before! Is it possible that the early, traditional writing of the Bible is authentic and represents authentic events? There are the parallel accounts that have been discovered, dating back over 4,000 years ago, of Creation. Parallel accounts of a great Flood. Parallel accounts of a tower of Babel and confusion of languages.

For a wider look at the authority of the book of Genesis (and the Torah as a whole), read our article The Antiquity of the Scriptures: The Torah. The sheer number of archaeologically verified statements found in the earliest verses of the Bible will surprise you.

And for a general look at the authenticity of the Bible, request our free booklet The Proof of the Bible.