The beginning of the end for the northern kingdom of Israel
By Warren Reinsch • December 11, 2018 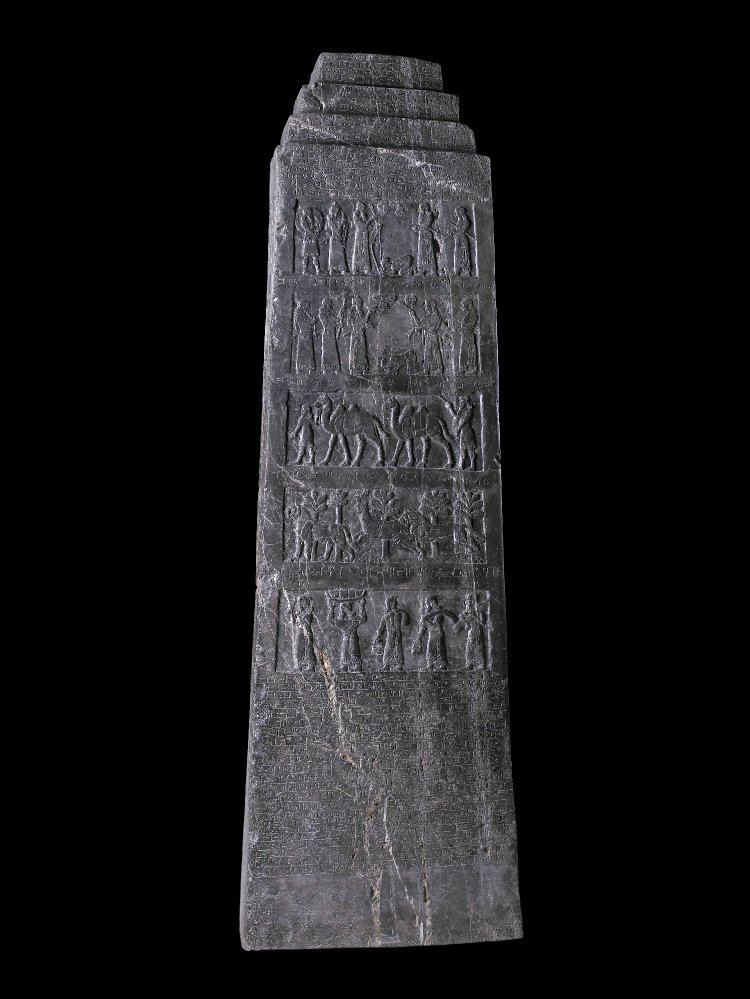 Discovered by Sir Austen Henry Layard in 1846, the Black Obelisk of Shalmaneser iii is considered the only complete Assyrian obelisk ever found. This perfectly preserved monument commemorates 31 years of Assyrian King Shalmaneser iii’s military conquests. Could this artifact contain the only known depiction of an Israelite king? If so, who is this Israelite king? And how sure is the evidence?

The obelisk was found by Sir Austen and his team at Nimrud (biblical Calah, or ancient Kalhu), located in modern-day Iraq, and later transferred to the British Museum where it still resides.

Standing just under 2 meters (6 ½ feet) tall and made of black limestone, this stele was erected in 825 b.c.e. The four-sided obelisk has five vertically arranged panels on each side, a total of 20 panels. Each panel tells a story about one of the subdued kings or rulers from Shalmaneser’s conquest. The Akkadian cuneiform inscriptions and carved reliefs narrate horizontally around the obelisk in a counterclockwise direction. One of these 20 panels has become more popular than the rest. It depicts an Israelite king bowing down before and offering gifts to Shalmaneser iii.

The tribute of Jehu, son of Omri: I received from him silver, gold, a golden bowl, a golden vase with pointed bottom, golden tumblers, golden buckets, tin, a staff for a king [and] spears.

In 841 b.c.e., he [Shalmaneser] defeated Hazael and, after failing to capture Damascus itself, marched to the Mediterranean coast where he received tribute from Tyre, Sidon and Samaria. The submission of the latter is shown on the “Black Obelisk” (from Nimrūd, now in the British Museum) where “Jehu, son of Omri” bows before Shalmaneser.

So the context of Jehu’s submission was just after Shalmaneser defeated Hazael, the king of Syria (2 Kings 8:7-15). Notice 2 Kings 10:32, “In those days the Lord began to reduce Israel; and Hazael harassed them throughout the territory of Israel” (Jewish Publication Society). So during the reign of Jehu, Syrian King Hazael was harassing Israel and attacking its land. The time frame lines up perfectly with the biblical account.

Verse 31 reveals why these attacks were coming upon Israel. “But Jehu was not careful to follow the teaching of the Lord, the God of Israel, with all his heart; he did not turn away from the sins that Jeroboam had caused Israel to commit” (jps). Jehu didn’t turn from the sins of Jeroboam. Sure, he did a great work by removing Baal worship from Israel (verse 28), but he kept the two golden calves which were worshiped in Dan and Bethel (verse 29). Even though they were still worshiping the same God, Yahweh, they were not worshiping Him in the manner He commanded.

Because of this sin, God used Hazael and Shalmaneser to correct Israel. Jehu managed to pay off the Assyrians, as did his successor Jehoash and many other Israelite kings, but that only delayed the inevitable. It was only a matter of time until Israel fell into Assyrian captivity. Between 721 and 718 b.c.e., the kingdom of Israel was taken into Assyrian captivity. From there, Israel appears to have disappeared from history.

But that’s not where the story ends for the northern tribes of Israel.

Unofficial ambassador for world peace and author Herbert W. Armstrong established an “iron bridge” relationship with Israel’s political leaders and academics. Through the 1960-80’s, his work supported major archaeological excavations in Jerusalem, including Nahman Avigad’s excavations in the Jewish Quarter, Benjamin Mazar’s excavations at the southern wall of the Temple Mount, and Yigal Shiloh’s excavations of the City of David. (For more background on Mr. Armstrong please request your free copy of A Warm Friend of Israel).